Studies suggest that fatigue and/or sleep deprivation may be a contributing factor in at least 30 to 40 percent of all heavy truck crashes. This article explores the effects of sleep deprivation and how the trucking industry works to improve safety on the roadways. 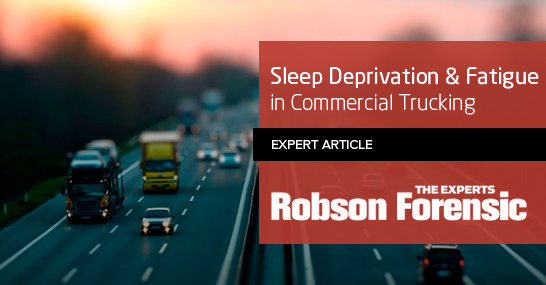 According to the National Highway Traffic Safety Administration (NHTSA), sleep deprivation is a factor in almost 100,000 motor vehicle accidents and 1,550 fatalities per year in the United States (www.nhtsa.gov). With respect to heavy truck crashes specifically, past studies suggest that fatigue and/or sleep deprivation may be a contributing factor in at least 30 to 40 percent of crashes (NTSB, 1995). These statistics are not surprising considering that a survey of long-haul truck drivers reported that 66% of drivers acknowledged experiencing some level of fatigue on at least half of their trips and 65% reported symptoms of drowsiness such as yawning, feeling drowsy or sleepy, and struggling to stay alert while driving. Critically, 13% of drivers reported actually falling asleep at the wheel (Dinges and Maislin, 2006).

The Effects of Sleep Deprivation

Long-distance truck drivers on overnight or early morning routes are even more susceptible to the effects of sleep deprivation than during normal daylight hours because of disruptions to their natural sleep patterns by working nights or long and irregular hours. Additional factors that may contribute to fatigue while driving a commercial truck include darkness and monotonous driving environments (Hanowski, et al., 1998).

Time of day is the largest factor contributing to fatigue/reduced alertness in commercial trucking and is the best predictor of crashes (Wylie, et al., 1996). A large, on-the-road study of commercial drivers found that drowsiness episodes were 8 times more likely between midnight and 6am than during other times of the day. Other studies have found that drivers are 20 times more likely to fall asleep while driving at 6am than at 10am (Harrison and Horne, 1999).

The graphic below shows the times of day when a driver is most susceptible to the effects of sleepiness based on the body’s circadian rhythm (Rhodes and Gil, 2002). The circadian rhythm is the body’s internal clock that regulates a person’s sleep patterns and fatigue (Banks et al., 2012). As sleepiness increases, a driver’s alertness decreases. Most drowsy driving crashes occur between midnight and 8am and between 1pm and 3pm, consistent with decreased alertness as predicted by dips in their circadian rhythm. 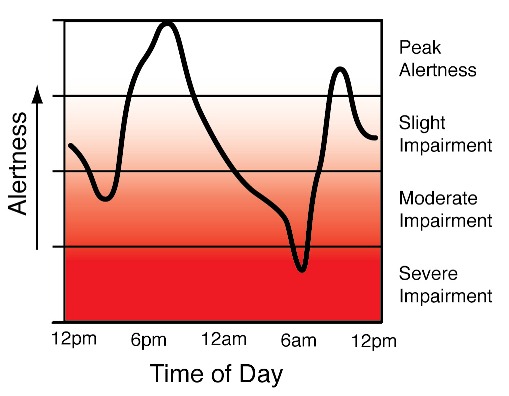 The Federal Motor Carrier Safety Administration (FMCSA) publishes a set of rules that limit the maximum amount of time truck drivers can work and drive before taking a required break. The Hours of Service (HOS) rules identify a truck drivers’ time as falling into one of four categories:

“Driving” and “On Duty – Not Driving” time is combined to determine the total hours a truck driver can work.

Truck drivers must record, or “log”, their time, activity, and location in a logbook: 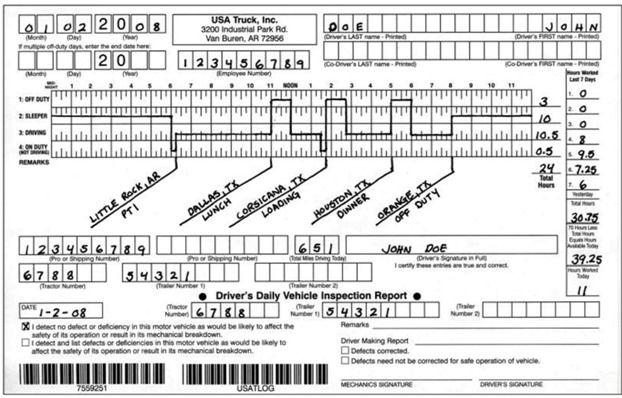 In its simplest form*, the FMCSA mandates:

(*some variations apply depending on the nature of the trucking operations)

Trucking is a 24/7 business. It is not uncommon for a truck driver to be awake and working during every hour on the clock over a week’s time. Add to this the difficulties of attempting to get proper sleep during times when people are typically awake.

“systems, policies programs, practices, and procedures used by a motor carrier to ensure … the safe movement of products and passengers through the transportation system, and to reduce the risk of highway accidents … resulting in fatalities, injuries, and property damage. (FMCSR 385.3 – excerpted)

Parts of these Safety Management Controls are a Motor Carriers’ Training Program. Motor Carriers have a duty to train their trucking driving fleet in how to properly use the Hours of Service rules. A proper Training Program should also include planning a safe and legal trip, proper time management, and other awareness measures to help their truck drivers stay safe and for the protection of the motoring public.

The role that sleep deprivation or fatigue may have played in a truck driving crash is a complex issue. Experts with specialized knowledge and expertise in the areas of sleep deprivation and human factors as well as hours-of-service regulations and trucking safety programs conduct investigations using a combination of accident analysis techniques, knowledge of human behavior and performance, and experience investigating trucking safety violations to determine the relevant factors in a crash.

Some of the challenges with drowsy driving cases include (Job et al., 2012):

Some initial indicators that fatigue or sleep deprivation may have been a factor in a crash include the following:

Despite the new HOS rules that were intended to reduce drowsy driving in commercial motor vehicles, a recent survey of truckers conducted by the American Transportation Research Institute found that 66% of drivers indicated increased fatigue while driving as a direct result of the new rules (ATRI, 2013). While these results may be surprising, it emphasizes the complexity involved in reducing drowsy driving in the commercial trucking industry. As a result, fatigue and sleep deprivation in trucking operations is likely to continue to be a major safety problem in the commercial trucking industry for the foreseeable future.