In this case, a driver lost control of his vehicle around a curve and the passenger in his vehicle died in the resulting crash. The driver was charged with aggravated vehicular homicide. Robson Forensic was retained to reconstruct the crash and determine if the driver acted improperly in a manner that caused the death of the passenger. 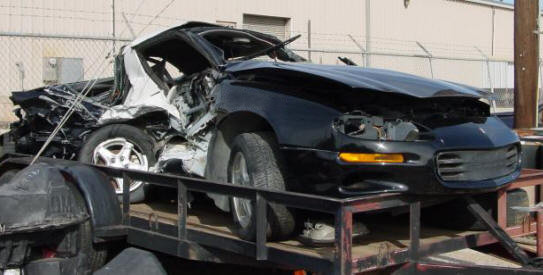 The driver of a Chevrolet Camaro lost control of his vehicle around a curve, skidded into the oncoming traffic lane, and was hit broadside by a Ford Escort. The front seat passenger in the Camaro was killed.

Accident reconstruction by the State Police estimated the Camaro’s speed at 47 mph when it lost control; based on these findings the driver was charged with aggravated vehicular homicide. Robson Forensic was retained to reconstruct the crash and determine if the driver of the Camaro acted improperly in a manner that caused the death of the front seat passenger.

Supported by the investigation of our expert, the driver of the Camaro was acquitted.

On December 28, 2000, John Mitchell was driving a 1997 Chevrolet Camaro eastbound along Tilghman Rd up the hill towards Rt. 33. Mitchell lost control of the Camaro and skidded into the opposite lane where the car was hit broadside by an oncoming car. Michele Smith, the front seat passenger was killed.

I analyzed the crash to ascertain if Mitchell’s actions were improper in a manner that caused the death of Smith.

2. Copies of photographs of the crash scene and vehicles.

Driving eastbound, the direction Mitchell was driving, on Tilghman Rd. at the crash site, is uphill and turns to the right. The radius of the curve, at the second lane, the lane in which Mitchell was driving is 516 ft. The weather on December 28 was cold and dry. The temperature at the time of the crash was about 11 degrees F. The road was coated with dried salt and was dry. The point of impact was approximately 100 ft along the straight part of Tilghman Rd, after the curve.

About 200 feet before the point of impact, there are patches in the pavement on the westbound lanes. These patches indicate the location of a water main break that occurred on the night of the crash. Water was running across the road causing ice to form. The road had been lightly salted some time that evening after the water was shut off. There were no warning signs or lights to indicate the presence of ice on the road.

The Highway Patrol analysis put Mitchell’s speed at 47 mph. The maximum speed that this curve of this radius, when dry, can be negotiated, in most cars is about 73 mph. Even accounting for the lower coefficient of friction due to the dry salt on the road and the cold weather, it is highly unlikely that a speed of 47 mph would have caused Mitchell to lose control.

The speed at the point of impact, based on the crush on the front of the Ford Escort, is estimated to be about 10-12 mph. The momentum of the Camaro and the momentum of the Escort were approximately equal because there is no indication of post collision travel by either car. The 3600 lb Camaro would have been traveling at 9 mph when it hit the Escort traveling 11 mph. This is consistent with the statement of Lauren Walker that she tried to stop but couldn’t avoid the oncoming Camaro. The fact that the Camaro did not hit the guardrail is another indication that the impact speed was relatively low.

The tire marks left by the Camaro are primarily yaw marks, and as such cannot be analyzed using straight skid length calculations, special spin energy calculations must be used. The average length of tire marks is 116 feet and is a close approximation of the travel of the center of gravity of the Camaro. The car spun approximately 120 degrees counter clockwise when it hit the Escort. The result of the spin analysis puts Mitchell’s speed at about 34 to 36 mph where he lost control.

Mabel and Lawson reported ice covering the road surface in the corner leading to the point of impact. This is consistent with water being tracked from the area of the water main break. An ice-covered road would have a coefficient of friction of about 0.15. The critical speed for this curve, when ice covered is about 34 mph.

The yaw marks indicate that Mitchell’s Camaro was curving to the left in this right turn. If he had entered the curve at over 73 mph on a dry road surface, the car would have taken a large radius right curve and gone wide of the lane. It would not have spun counterclockwise. It would have hit Walker’s Escort head-on. If Mitchell had hit the ice, while driving at 47 mph, he would have skidded straight off into the guardrail while still on the curved part of the road. If the road was dry and Mitchell was driving 47 mph, he, he would not have lost control.

For the ice covered road, and Mitchell driving at or near the speed limit, 35 mph, the Camaro would have been on the ragged edge of control around the curve. It is very likely, that a rear wheel drive car like the Camaro would have lost rear wheel traction driving up the icy hill. If Mitchell had counter steered to maintain control, the front wheels would have been aimed to the left. Once Mitchell’s Camaro had driven off the ice and onto the dry pavement, the counter steer position of the front wheels would have caused an immediate counter clockwise spin and the car would have curved to the left. This scenario is consistent with Binder’ statement how he saw the Camaro spin out.

A driver’s expectation is an important factor in traffic safety. The roads around Fayesville were dry the night of December 28, 2000. Mitchell would not have expected to encounter ice on the road. Traveling the speed limit in those conditions is a safe and prudent behavior.

An icy area on the road constitutes a traffic hazard that a prudent driver would not expect on a dry night. No signs were erected to warn approaching traffic of the hazard. Mitchell was unexpectedly caught by the sudden change in road conditions and through no fault of his own, crashed.

Within the bounds of reasonable engineering certainty, and subject to change if additional information becomes available, it is my professional opinion that:

In this article, the automotive engineers at Robson Forensic provide an introduction to vehicle restraint systems and how forensic experts inspect these systems as part of an investigation. Vehicle…