In the design of an automobile, Automatic Emergency Braking (AEB) and Forward Collision Warning (FCW) systems are installed to increase safety by reducing the severity of rear-end collisions, or even preventing them from occurring in the first place. FCW is a system that will inform the driver through a visual and/or tactile alert that braking is required to prevent a collision from occurring. FCW-only systems have no AEB installed to assist with the braking.

In an AEB-equipped car, the visual and/or tactile FCW alert will be given, followed by the vehicle automatically applying the brakes in a predetermined and calculated manner to avoid or reduce the collision speed. Like all Advanced Driver Assistance Systems, these systems are tuned during the Research and Development (R&D) process by a team of engineers from the vehicle and system manufacturers, and performance will vary based upon the goals of the vehicle manufacturer and the components used.

In this article, Automotive Engineering expert Roland Hoover discusses the variables that are considered during the R&D process, and how the performance of these systems is assessed during an investigation after a crash has occurred. 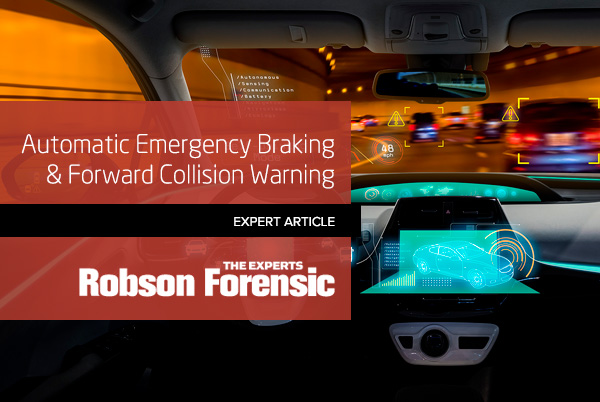 One of the first mainstream driver aid systems introduced in the early 1970s was Anti-Lock Brakes (ABS), followed by Electronic Stability Control (ESC) in the late 1980s and early 1990s. The introduction of more advanced sensors and faster computers has allowed engineers to expand the reach of ADAS and CAS systems, providing visual, audible and tactile feedback to the driver along with automated control of the vehicle’s braking, powertrain and chassis systems, including the steering system. A limited or partially enabled use of FCW/AEB in production vehicles began appearing in some 2003 models, however the widespread use of FCW/AEB did not begin until 2010 and newer models.

AEB and FCW typically utilize a common control module. Depending on the supplier, the module to process the proximity and radar sensors are separate from the ABS/brake control module. FCW and AEB can use a variety of different sensors to determine the distance, speed, and acceleration between the car and a car or object ahead.

Typically, auto manufacturers integrate FCW into a vehicle platform before AEB, due to the development costs associated with properly configuring AEB to apply maximum braking given the vehicle configuration (vehicle weight, wheels, tires, etc.). Due to these development costs, some manufacturers opt to only put AEB into their top-of-the-line models.

Fine tuning of the systems of the vehicle to work for a given configuration happens toward the end of the R&D development process. Manufacturers typically have a choice of 3 to 5 supplier brands of controller. As such, each controller is highly proprietary in the algorithm used to process the inputs and calculate the outputs, and no two are alike in how the algorithm is used or fine-tuned to each car. The easiest way to understand the tuning process for the AEB controller (or any of the electronic controllers in the car) is to think of a home stereo unit with knobs for Volume, Balance, Bass, Mid, and Treble. As each knob is turned, a change in the music output is noticed and can be used to improve the quality of the sound for the given room conditions. In the AEB controller, there can be as many as 30 knobs to turn to improve the performance of the AEB function.

There are several key factors that affect FCW and AEB system tuning. The sophistication of the controller and the “level” of performance purchased by the vehicle manufacturer is one of the most restrictive factors to developing a robust AEB system. Sometimes, manufacturers will opt to purchase the controller with only 10 “knobs” of control variables for some car models. This can create an especially difficult situation for the R&D team, because it limits their ability to fine tune the system for a specific trim level of car, and can introduce variables that were not and could not have been taken into account.

Imagine having a radio with a volume control that only has low/medium/high as choices for the loudness of the speakers: this produces undesirable effects and is unsatisfactory to the user. In a car, this can be the difference between the AEB systems being able to fully or partially utilize the maximum braking capability of the car. Other factors that impact the AEB/FCW system tuning in a vehicle include:

In all car models, the OEM (Original Equipment Manufacturer) tuning goals are for the AEB to provide braking to reduce the severity of the impact. In my professional experience with tuning these systems, I have found that some auto manufacturers work to completely avoid the collision by applying full braking capability. This means the AEB system will come on earlier and stronger, which may be more noticeable to the driver, and lead some drivers to think the system is acting too early. However, based on the algorithm, testing, and fine tuning of the AEB and ABS, the system will almost always perform better than a human could in an emergency situation. Others focus only on reducing impact speed by initiating braking at a fraction of the available stopping capability of the vehicle. This means that collisions may still occur, but at a reduced severity.

When investigating a vehicle for proper AEB system operation and/or tuning, one of the first things to consider is the detectability of the forward vehicle or object. Many specialized plastics found in car bumper covers are actually invisible to certain types of proximity sensors used for AEB, and some specialized paints can absorb the signal sent outward from the AEB sensors and return a reduced or altered signal which causes the AEB controller to miscalculate the vehicle ahead. The sensors used for AEB are typically mounted in the front bumper and/or windshield and have a limited “viewable angle,” poor sensor overlap, sensor calibration, and prior bumper damage can make a sensor view the sky or ground and miscalculate the objects ahead.

All Advanced Driver Assistance Systems (ADAS), such as ABS, Electronic Steering, Throttle by Wire, Lane Keeping Assist are utilized and tuned in the same way; through simulation, laboratory, and real world tests that are used to develop and validate the system. Most of these systems utilize the same vehicle sensors and rely on a module’s programming and algorithm to determine how to sense and respond to a condition. All of these systems, combined with the addition of multiple cameras, radar, and LiDAR are what will go into fully automated driving vehicles (level 4 and 5).

The vehicle experts at Robson Forensic are more than just mechanical engineers and reconstructionists, they are automotive engineers with industry experience in design, development, and manufacturing. Our experts have designed, fine-tuned, and incorporated driver aids and driver automation systems into modern passenger vehicles.

Contact the author of this article or submit an inquiry to determine which of our experts is most appropriate to assist on your case.

Roland Hoover is a mechanical engineer with broad experience in automotive and motorcycle engineering. His career includes more than 20 years of engineering experience at OEM vehicle manufacturers,… read more.

In this article, the automotive engineers at Robson Forensic provide an overview of the individual components and sensors that make advanced driver systems and autonomous vehicles possible. In related…

In this article, motorcycle expert Roland Hoover discusses aftermarket motorcycle parts and accessories. He examines the standard of care for vehicle manufacturers, part suppliers, mechanics, and…