In this article, the automotive engineers at Robson Forensic provide an overview of the individual components and sensors that make advanced driver systems and autonomous vehicles possible. In related articles, our experts provide a closer examination of driver assistance systems and the human factors behind vehicle automation. 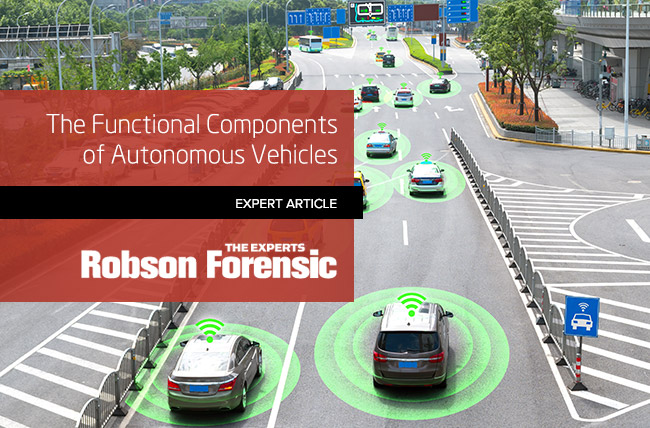 The Functional Components of Autonomous Vehicles

Advances in electronics and sensor technologies have led to the development of numerous advanced vehicle systems designed to assist drivers in controlling their vehicles under normal conditions, and avoid or mitigate impact during emergency situations. Electronic driver aids are not altogether new; systems such as Anti-Lock Braking or Electronic Stability Control have been used to control discrete vehicle systems for several decades. What makes recent innovations different is the ability of these systems to intercommunicate and control a greater proportion of vehicle operation, making it increasingly common for the vehicle to supplement driver input.

The automotive experts at Robson Forensic have investigated a variety of cases in which the design and performance of electronic drivers aids, including semi-autonomous systems, has been called into question. In this article, our experts provide an overview of the individual sensors/components that are used by automotive manufacturers in the design of autonomous systems. It is necessary to understand the capabilities and limitations of the individual components in order to evaluate the efficacy of the system as a whole.

The operation of an autonomous vehicle requires actuation of 3 major controls:

Most vehicles on the road today already have all of the actuators needed to control the vehicle for automation. Throttle actuation is achieved in most modern vehicles via electronic control. Electric assisted power steering has become the norm, already displacing hydraulically driven power steering systems throughout the industry. Finally, brake actuation is achieved by way of electronic stability control, which the National Highway Traffic Safety Administration (NHTSA) has required on all new passenger vehicles since the 2012 model year.

The necessary actuators that make it possible to operate a modern vehicle without a driver in the seat have been in place for several years. The revolutionary change has been with the introduction of sensors and computer systems that enable vehicles to understand their location, comprehend their environment, and make complex driving decisions.

A variety of sensors and computer systems are required for a vehicle to replicate the traditional human process of understanding its current location, desired location, and how to safely navigate the routes and hazards in between. Among the sensors currently available, no single unit is capable of deciphering its environment in a manner that provides sufficient information for autonomous driving. Instead, engineers design a system which incorporates a combination of sensors, strategically leveraging specific capabilities of one system, while accommodating its deficiencies through the use of others. In the area below we describe the most common sensors used in driver aids and autonomous systems: 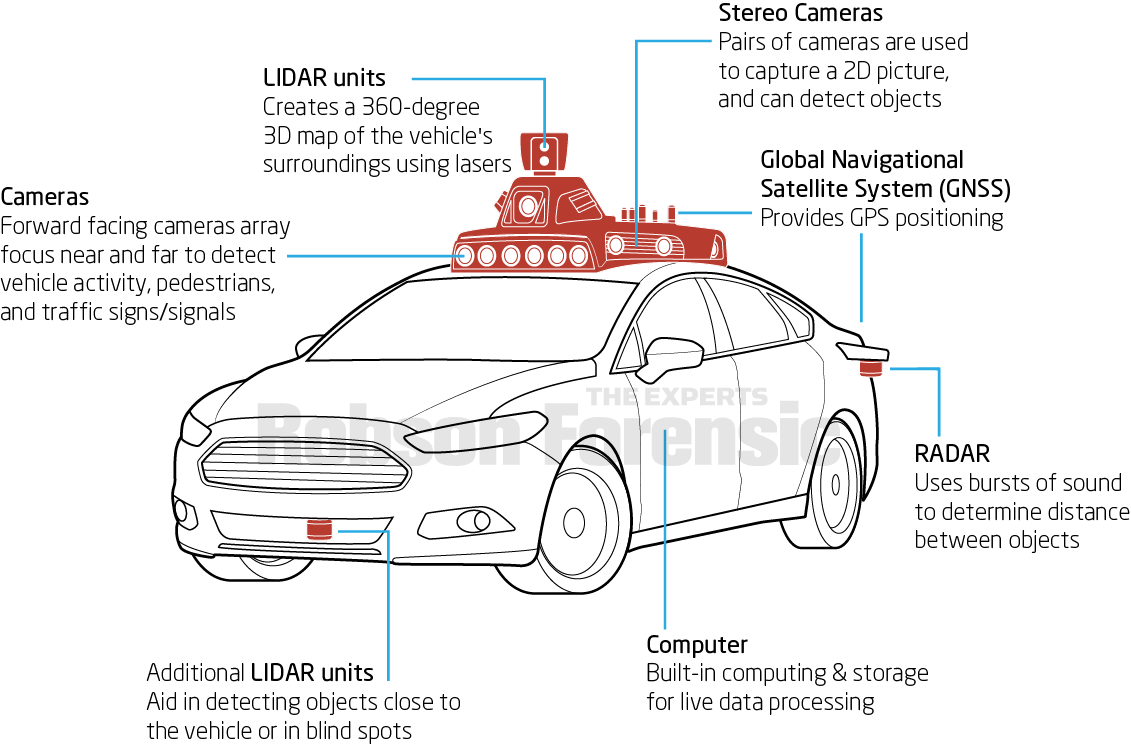 RADAR - Uses bursts of sound to measure distance by measuring the time it takes for the sound to return to the sensor.

LIDAR - Similar to radar but uses lasers to measure distance instead of sound, with a range of up to 200m.

The art of marrying the data from multiple sensors in real time enables a CPU to determine the state of the vehicle and its surroundings. Individual shortcomings of each sensor type cannot be overcome by using more of the same sensor, so data from different sensor types must be combined to mask the shortcomings in the individual sensors. In short, the whole is greater than the sum of its parts. By fusing the sensors into an integrated system, engineers enable the vehicle to identify its surroundings and threats with greater accuracy.

The vehicle experts at Robson Forensic are more than just mechanical engineers and reconstructionists, they are automotive engineers with industry experience in design, development, and manufacturing. Our experts have designed, fine-tuned, and incorporated driver aids and semi-autonomous systems into modern passenger vehicles.

Contact the author of this article or submit an inquiry to determine which of our experts is most appropriate to assist on your case.

This article discusses the human factors behind autonomous vehicles; it provides an overview of the various levels of vehicle automation and also discusses some of the challenges involved in…

In this article, the experts at Robson Forensic discuss the typical components of a vehicle-pedestrian collision and delve into specialty technical issues that are frequently relevant to these…

In this article, the automotive engineers at Robson Forensic provide an introduction to vehicle restraint systems and how forensic experts inspect these systems as part of an investigation. Vehicle…