At a catered event, the industry standard of care when multiple drinks are served to an individual is that the bartender/server be able to observe the recipients of those drinks to prevent service to a minor or to someone who is visibly intoxicated. Issues of over-serving or service of alcohol to a minor are pertinent in many liquor liability disputes, particularly in cases involving events with an open bar.

In this article, Food and Beverage Operations & Dram Shop Expert, PJ Romanos details the standards of care that apply to catering facilities, hotels, and other event venues that serve alcohol. 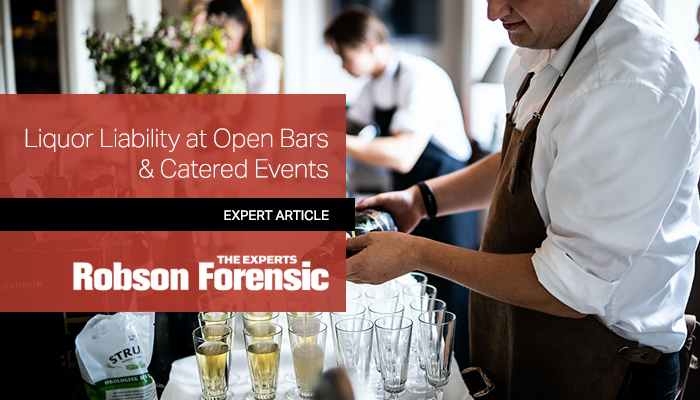 The ability to recognize and understand the behavioral cues associated with alcohol intoxication is foundational to alcohol service programs. These behaviors and their corresponding intervention techniques are taught in every responsible service of alcohol program, including TIPS, RAMP, and TAM. The four traditional behavioral cues are:

By understanding the behavioral cues associated with alcohol intoxication and the factors that affect Blood Alcohol Concentration (BAC), servers can make safe and informed decisions regarding the service of alcohol. The case described in this article represents an example of a venue that overserved alcohol resulting in deadly consequences.

The decedent in this case and his girlfriend attended a holiday party sponsored by his employer, held at a local banquet facility. Testimony showed that throughout the course of the 4-hour party, the decedent ordered a steady stream of drinks – often multiple drinks at a time – from the bar, and drank liquor from a flask with other coworkers in sight of the bar staff. One witness noted that just during dinner, the decedent went to the bar 6-7 times, and each time returned with at least 2 drinks for himself.

As the evening progressed, the decedent became increasingly visibly intoxicated – he became loud/vocal, inappropriately removed articles of clothing, dropped a drink and broke the glass, had slurred speech, glassy eyes, and impaired motor function. For the duration of the party, none of the venue staff monitored the number of drinks he was being served, nor was he refused a drink, including the “last call” drink he ordered at the end of the party.

When the party ended, the decedent drove off in his car with his girlfriend in the passenger seat. Shortly thereafter he lost control of his vehicle and collided with a telephone pole. He succumbed to his injuries the next day. His girlfriend suffered severe injuries.

The decedent’s BAC measured .190 approximately 3 hours after leaving the catering venue. A forensic toxicologist determined that at the time of the accident, his BAC would have been .226, more than two and a half times the legal limit.

Responsible service of alcohol programs teach that .08 is the threshold for Driving Under the Influence in every state. One of the bartenders at the venue testified that she was not aware that legal intoxication was .08 BAC. She further testified that when she received the safe alcohol service training several years prior, the instructor gave her the correct answers to pass the test and that she didn’t remember anything from the training. She never renewed the training.

Based on the safe alcohol server training programs, toxicology protocols, and BAC charts fully accessible to all alcohol serving establishments, some of the behaviors a person with a BAC of .226 may exhibit would be:

In this case, our expert determined that the venue deviated from the standard of care in multiple ways that contributed to the fatal outcome.  They allowed the decedent to order as many drinks as he wanted each time he went to the bar, without determining who was consuming them. They failed to have written policies or procedures in place to ensure that guests would not leave their premises while intoxicated. The venue also failed to have regular training processes in place to ensure that all staff were thoroughly trained on the safe service of alcohol.

Robson Forensic is equipped to provide the full range of expertise required towards the resolution of claims and litigation involving the abuse or misuse of alcohol and other drugs. Our firm includes experts in toxicology, dram shop, premises security and police practices, all of whom are nationally recognized leaders in their fields.

Paul “PJ” Romanos is a food and beverage operations and liquor liability expert with over 30 years of experience in the hospitality industry. PJ has worked for some of the most… read more.

The most reliable indicator of driver impairment is an observation of a driver’s behavior behind the wheel, followed by an assessment performed by a qualified Drug Recognition Expert (DRE). Forensic…

Bars, taverns, nightclubs, and restaurants have a responsibility to implement reasonable measures to provide a safe environment for guests and employees. A central task in many of our cases is to…