Bars, taverns, nightclubs, and restaurants have a responsibility to implement reasonable measures to provide a safe environment for guests and employees. A central task in many of our cases is to determine what constitutes reasonable security. This article explores that topic by evaluating a specific scenario involving a fight that starts inside a bar. 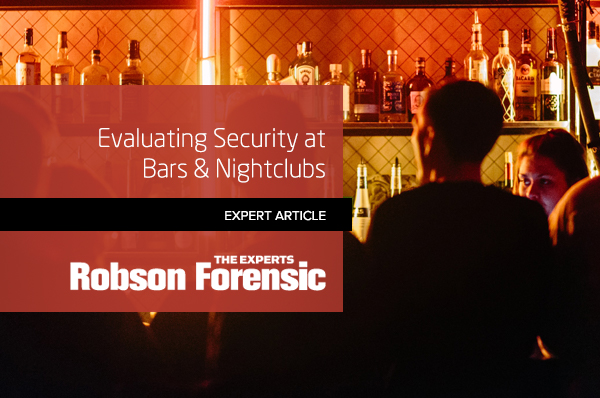 The standard of care for security at alcohol-serving establishments is informed by the specific characteristics of a property, including the type of facility, crime demographics, and location.

The type of facility will inform the level of security measures that are reasonable. For example, while country clubs may be magnets for high value vehicles and jewelry, we typically expect to see more assaults and violent crime at crowded bars and nightclubs.

Location is an important factor to consider in determining reasonable security. Whether an establishment is located within a city center, suburban neighborhood, or commercial area may influence the security risk. Crime demographics compiled from police reports during the last two to five years prior to the incident are essential tools in determining the frequency and pattern of relevant crimes. For this type of analysis, relevant crimes are primarily assaults and acts of violence.

Following a systematic approach, it is possible to reliably determine the foreseeability of crime at a specific location and the appropriate security measures to provide a safe environment for guests and employees. More information on the criteria for determining reasonable security can be found in this presentation.

The Scenario – Bar Fight Reengages in the Parking Lot

It is a Friday night and a popular bar is hosting a highly anticipated sporting event. Drinks are flowing and verbal banter between opposing fans is escalating. Suddenly, a fight breaks out between two groups of visibly intoxicated men. Security responds quickly, gathers around the men, and stops the fight. Both parties are removed from the bar and escorted out of the building at approximately the same time. Once outside, the two groups reengage in a physical altercation in the parking lot and one of the males is assaulted and sustains a serious injury.

What Is the Standard of Care?

The expert’s investigation will typically seek to determine if the bar failed to meet the standard of care and if so, address whether the bar’s actions caused or contributed to the plaintiff’s injuries. Two key issues for review within this scenario include:

Evaluating the Service of Alcohol

In this scenario, fans of rival teams, fueled by alcohol became combative. The service of alcohol itself is not indicative of foreseeability, however, the men involved in this incident were visibly intoxicated and over-service of alcohol violates the standard of care.

Bars are responsible for every drink an employee serves. As such, written policies and procedures are necessary for the service of alcohol. In addition, all bartenders and wait staff should hold current alcohol service certification.

A check of local alcohol control boards revealed previous alcohol violations by the establishment during similar types of hosted events. Management had sufficient notice of improper alcohol service and opportunities to remedy the problem.

Regarding the security response to the altercation, the bar’s security personnel broke up the fight and moved the two groups of men outside to the parking lot. Given the assaultive behavior of the individuals while inside the premises, and their visible state of intoxication, security knew or should have known that there was a risk of another physical altercation when the two groups were moved outside.

The standard of care would have been to separately escort the two groups out of the bar to decrease the likelihood of reengaging in the fight outside. As a preventive measure, security should have called for taxis or rideshare companies to see each group off the premises. If the groups resisted rides, the bar should have contacted police to diffuse the situation. When the first group had left the premises, the second group should have been escorted outside, following the same protocol.

The history of police reports showed previous violent issues with the bar during similar hosted sporting events. Due to a history of assaults on the premises, it was determined the amount of security detail personnel for or this event was inadequate. Additionally, the bar should have had policies and procedures in place to properly respond to this incident.

In this example, it was determined that the bar failed to meet the standard of care in a manner that caused or contributed to the plaintiff’s injury.

The factors discussed here will be considered by an expert when evaluating whether an alcohol serving establishment met the standard of care for reasonable security. By conducting an analysis of the factors of premises type, crime demographics, and location, a level of crime foreseeability can be established to determine reasonable security measures for the premises and to then inform an assessment of the security measures that were in place at the time of the incident.

Forensic analysis of CCTV video evidence is potentially broader than scrutinizing the visible elements in a recording. System analysis can often be used to identify other relevant video files,…

In this article, the Premises Security Experts discuss security as it relates to Bars, Taverns, Restaurants and Nightclubs. This article was published by HospitalityLawyer.com in their December 2017…