Dr. Justin Ramsdell is a clinical psychologist and college professor who also works as a Crisis Intervention Trainer for the Arlington and Fairfax County Sherriff’s and Police Departments in Virginia. He specializes in educating law enforcement and emergency medical personnel on best practices of interacting with mentally ill or emotionally disturbed individuals. He was asked by the AirTalk® show on 89.3 KPCC/Southern California Public Radio (SCPR) to lend insight on the degree of responsibility officers have de-escalating a potential “suicide by cop” situation. 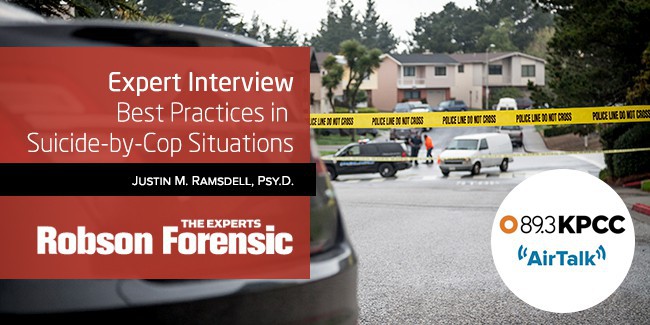 The conversation is centered on an ongoing “suicide-by-cop” case which is going to trial in January 2019, where the family of the victim is pursuing a wrongful death suit against the officer in civil court. As Dr. Ramsdell explains, officers have a tremendous responsibility to keep themselves, bystanders, as well as the suspect safe during an intervention. During crisis intervention, officers have to assess whether the suspect is committing violence, intent on violence, or emotionally disturbed. They will then use crisis intervention skills to put a stop to that violence or eliminate the risk thereof.

Listen to the segment by clicking below, or read the transcript:

LARRY MANTLE: But first a so-called suicide-by-cop incident is at the center of a civil suit against the Sacramento County Sheriff’s Department. It raises the question of what degree of risks officers are expected to take on versus efforts to deescalate such incidents. Two years ago, Sacramento deputies responded to a call from a woman concerned about the behavior of her depressed husband. She said he came home drunk and behaving erratically. After deputies arrived the woman’s husband grabbed a knife. According to witnesses he asked the deputies, “If I come at you, you are going to shoot me, right? It’s over I’m going to die.” He then approached the deputies. One deputy opened fire and killed the man. Now his family is suing the Sacramento deputies. This case is scheduled for trial this coming January. So the tragic incident raises the question of what degree of responsibility officers take on to deescalate a potential suicide by cop and how much risk should law enforcement take on to try and keep someone from using someone else to end his or her life. With us is Justin Ramsdell, who is a Crisis Intervention trainer for Arlington and Fairfax counties’ Sheriffs and Police departments in Virginia. Also, Assistant Professor of Psychology at George Mason University. Professor thank you for joining us.

JUSTIN RAMSDELL: Thank you. It’s good to be here.

LARRY MANTLE: So as you see this, kinda, where do you draw the line and how far should officers and deputies have to go in risking their lives to keep someone intent on suicide potentially alive?

JUSTIN RAMSDELL: Well I think it should be recognized that first off, that officers have an incredibly difficult job just on a day to day basis. But second of all, when you’re talking about a situation in which your officer assisted suicide or suicide-by-cop, whichever terminology you’re choosing to use, then it falls in an interesting in-between category where you’ve got someone who has probably some form of mental illness or at least emotional distress who is intent on hurting themselves. Whereas, if we’re talking about someone with a mental illness who’s not being violent there’s no intent, there’s no violent intent there. They just may happen to be committing a crime or trespassing and so officers can deescalate that situation one way. If you’ve got someone who is without a history of mental illness, who is being violent, then the officers are going to approach that scene in an entirely different manner because it’s going to – they’re going to focus on stopping the violence. And when it’s suicide-by-cop you’ve got this combination of both of those things, right? So you’ve got someone who’s having some emotional disturbance who is also intent on violence but violence to themselves. And whether or not officers put themselves in harm’s way is ultimately their decision and how they feel. But the important thing for them is to keep themselves safe, to keep the bystanders safe, and do the best they can to deescalate the situation while keeping the suspect safe.

The police practices and procedures experts at Robson Forensic are frequently tasked with reviewing the adequacy of police department policies and procedures and determining whether or not they were properly adhered to in relation to a specific incident. Among our experts, you can find former police officers, retired FBI agents, and professors of forensic science.

Please submit an inquiry to determine which of our experts is most appropriate to assist in your case.