In cities with streetcars, trolleys, trams, or other light rail systems (or remnants of abandoned rail systems), the tracks embedded in roadways are a known hazard for bicyclists, potentially resulting in wheel entrapments or loss of control. This article discusses some of the issues typically considered in relevant forensic investigations, including the anatomy of embedded rails, available safeguard options, and other methods used to notify cyclists and promote public safety. 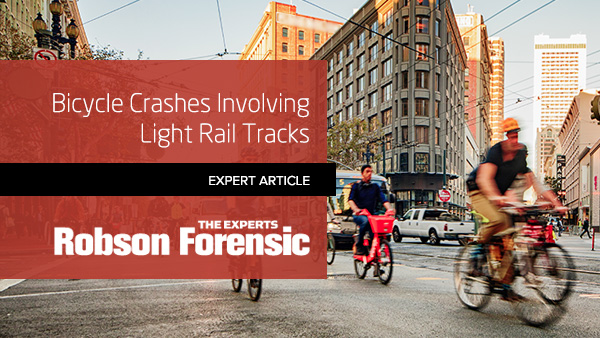 The embedded rails used for light rail systems include a flangeway gap, or depression, running alongside the length of each steel track. This gap is designed to accommodate the streetcar’s wheel flange as the trolley or tram rolls along the rail, but the dimensions of a typical flangeway gap make it a potential hazard for narrow wheels, canes, or the foot of a pedestrian. 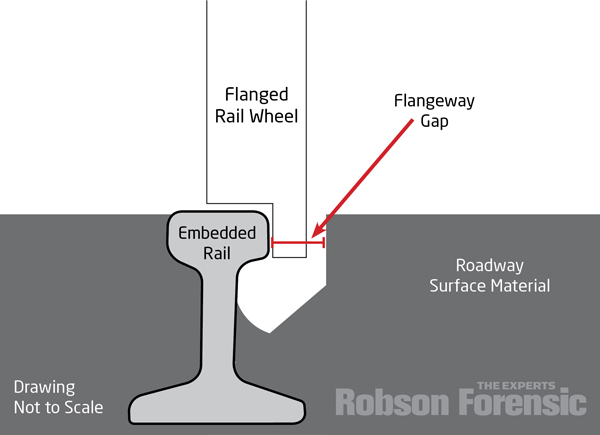 The size and depth of the gap, relative to the width of the bicycle tire, determines how a bicycle will be affected:

Both deflection and entrapment of a bicycle wheel can result in a crash. These incidents are typically more perilous where the front wheel of the bicycle interfaces with the flangeway gap. Bicycle crashes of this kind have the potential to be fatal, not only as a result of impact injuries, but also from the rider being thrown in an area with motor vehicle traffic and getting hit and/or run over.

There are a number of methods used by municipalities to reduce the prevalence of injuries related to embedded tracks, which include guards, re-routing pedestrian and bicycle traffic away from potential danger zones, posting warnings to alert the public to potential danger, and public outreach and education. The solution appropriate for each application is dependent upon a number of specific environmental conditions.

A common method of protecting against wheel entrapments and other mishaps, is the installation of compressible rubber flangeway filler. Flangeway filler provides a nearly flush surface for bicycles and pedestrians to traverse, but compresses under the weight of the streetcar’s wheel flange, allowing for normal transit operation. 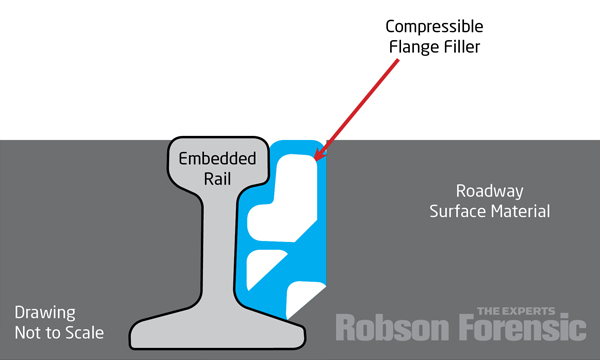 Flangeway filler is used by many municipalities in locations where bicycle and pedestrian traffic is expected.

Orientation of tracks to bicycle lanes

The risk to cyclists is minimized when bicycles approach at, or near, a perpendicular angle to an embedded track. The Manual On Uniform Traffic Control Devices (MUTCD) provides guidance on bicycle lanes crossing over tracks, and in those cases, crossings are designed to be as close to a right angle as possible. 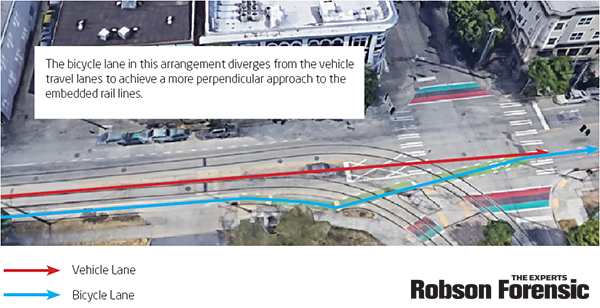 As a result of the safety achieved from perpendicular crossings, in some instances bicycle lanes will diverge from vehicle travel lanes. Where this is done, colored pavement can be used to guide cyclists. Because of the known hazards, it can be unreasonably dangerous for bicycle lanes to run in close proximity and parallel to embedded rails. The MUTCD does not provide specifications or guidance on designing for bicycle travel parallel to these roadway features.

Warnings signs should be used to alert cyclists to impending hazards. Placement of signs should be determined to draw attention and permit adequate time for response. The specific requirements will vary based on environmental conditions, but warnings should be composed of readily available sign panels that convey an easily recognizable representation of the hazard present. 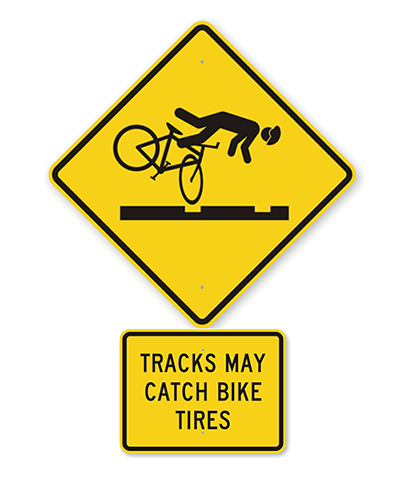 Bicycles are vehicles and, unless specifically prohibited, have the same rights to the roadway as motorized vehicles. They will travel in a designated bicycle lane (when available), but it is accepted practice, and sometimes necessary, for bicycles to be ridden on other portions of a roadway, such as when turning, passing vehicles, or avoiding hazards.

The specific actions of a bicyclist within the context of an incident will often be evaluated by a specially qualified bicycle expert. For more information on bicycle experts at Robson Forensic, please visit our Bicycle Forensics page.

In a case where a bicycle crash has resulted from an entrapment in a streetcar or light rail track, the Highway Engineering experts at Robson Forensic have the credentials and experience to examine whether the design, construction, or maintenance of the street, pavement, and track adhered to the applicable codes, standards, and regulations.

There are several experts on staff who are qualified to and experienced with investigating similar cases. please contact us or submit an inquiry to determine which expert is most appropriate to assist on your case.

When a bicyclist loses control, the resulting incident investigation is similar to automotive crash reconstruction in that it involves the use of engineering principles and scientific analysis to…

In this article the highway engineering experts at Robson Forensic introduce some of the hazards associated with the use of steel plates in roadway projects, along with the standards designed to…