Conflicting testimony in bicycle vs. vehicle collisions can often be resolved through a biomechanical analysis of the injuries. In this article, Mechanical Engineer & Biomechanics Expert, Dr. Carolyne Albert describes how engineering and physics can be used to scientifically answer questions about the mechanics of bicycle collision incidents and injuries. 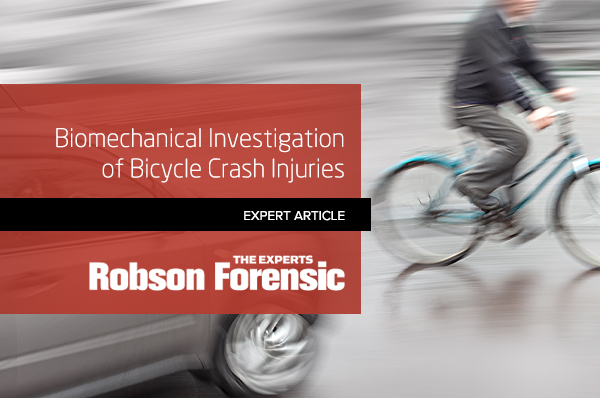 When a collision occurs between a bicycle and a vehicle, the cyclist can experience several impacts against the vehicle, ground, and/or other surfaces. Oftentimes, these incidents are unwitnessed, and the parties may have differing accounts of what happened.

Legal disputes over bicycle-related injuries may bring up questions such as:

Biomechanics is a scientific field that applies engineering and physics to biological systems including the human body, and deals with the effects of forces and motion on the body.

A traumatic injury is a material failure of a tissue (e.g., bone, tendon, skin, etc.) in response to applied loading (forces). For an event to result in a traumatic injury, it must generate the necessary type and direction of loading to cause that injury, and that loading must exceed that tissue’s injury threshold.

In this article, we review a case involving an unwitnessed collision between a bicycle and a pick-up truck, in which the individuals involved provided conflicting accounts of the event. The driver of the pick-up claimed that the cyclist crashed head-on into the front of his vehicle, whereas the cyclist testified that the pick-up struck her on the side. Photographs and repair estimates for the pick-up truck documented a cracked front grille.

The purpose of this biomechanical investigation was to determine which of the two scenarios resulted in the loading necessary to cause the cyclist’s diagnosed left hip fracture and contusion on the lateral aspect of her upper left thigh.

Our biomechanical expert determined the type and direction of force necessary to cause each of the cyclist’s diagnosed injuries, i.e., the mechanisms of injury. In this case, the mechanism for the diagnosed hip fracture and contusion were compression and bending forces consistent with being generated by an impact force to the lateral aspect (side) of her upper left thigh.

Our expert then applied the fundamental laws of physics to analyze the mechanics of each scenario presented. The motion and forces experienced by a cyclist during a collision follow Newton’s Laws. Newton’s First Law states that a body at rest remains at rest and a body in motion stays in motion at a constant velocity unless acted upon by an outside force.

The driver of the pick-up stated that the cyclist crashed head-on into the front of his truck. In that scenario, upon the front of her bicycle impacting the truck, the cyclist’s body would continue forward at a constant speed until it was stopped by an outside force. Based on her direction of motion, the anterior side (front) of her body would impact the front of the truck. An impact force to the anterior side of her body does not generate the loading necessary to cause her diagnosed injuries.

The cyclist stated that the pick-up drove into her left side. This impact generated a compression force to the left side of her body. Based on the location of the damage on the front grille of the pick-up, the height of the bicycle seat, and the cyclist’s anthropometrics, our engineer determined that the truck’s front grille impacted the lateral aspect of her left hip, which is consistent with the crack in the vehicle’s front grille. That impact force to her left hip generated the loading necessary to cause her diagnosed injuries.

Based on the physical evidence, including the diagnosed injuries and the damage to the pick-up truck, our biomechanical investigation determined that the pick-up truck impacted the cyclist on her left side as she testified.

The biomechanical experts at Robson Forensic offer a scientific resolution to conflicting testimony. By applying injury biomechanics and the principles of physics and engineering it is possible to determine if an injury is consistent with the physical evidence and descriptions of an event. In addition to bicycle crashes, we perform these analyses on motor vehicle collisions, sports and recreation injuries, workplace mishaps, and slip/trip/fall incidents.

Dr. Albert is an expert in mechanical engineering with specific expertise in orthopaedic biomechanics. She applies principles of biomechanics, dynamics, and mechanics of materials to determine the… read more.

When injury causation is in dispute following a pedestrian strike incident, a biomechanical reconstruction of the event is sometimes necessary to confirm or refute eye-witness testimony. In this…

In this article, biomechanics expert, Carolyne Albert introduces the fundamental concepts pertaining to the mechanics of bone injuries. The biomechanical experts at Robson Forensic are engaged when…

Over five thousand American workers were killed on the job in 2016.1 Over the same period, almost three million nonfatal workplace injuries and illnesses were reported in the private sector.2 Every…