An effective and skilled ship’s navigation team, subject to applicable requirements, should be well versed and trained in Bridge Resource Management (BRM). During any investigation where an examination of whether or not the bridge team effectively exercised their operational prowess through use of BRM skills, understanding how BRM could have, or should have, been used, can help the investigator identify or rule out potential causes of the casualty.

In this article, Captain Hendrik Keijer discusses the concept of BRM and provides examples of how this concept can be applied to maritime incident investigations. 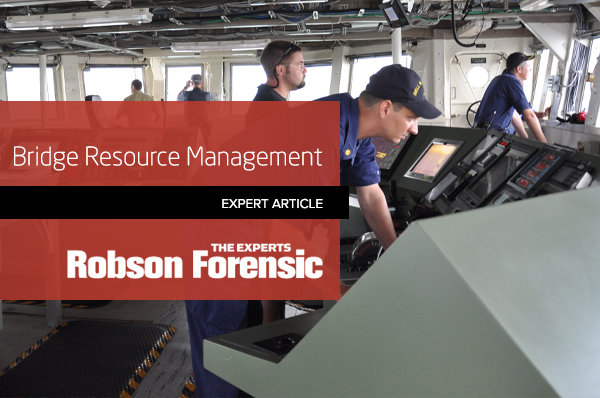 A ship’s bridge is the navigational nerve center of shipboard operations and each member of the bridge team has a role to play to execute safe operations. In days gone by, the various crew members took orders from frequently authoritarian Captains, who generally did not appreciate or tolerate feedback whether the feedback was in the interest of safety or not. Over time, however, forensic investigations into ship casualties and their causes have revealed the importance of BRM and that if a bridge team worked more like a team, as envisioned and mandated by the application of BRM principles, casualties likely could have been averted. Thus, through hard lessons learned, the system called Bridge Resource Management (BRM) was introduced. BRM tasks all team members to challenge others, the captain included, when clarification is required and possible errors are identified whilst working as a team. The introduction of the BRM concept generally phased out authoritarian captains. The publication Shipboard Bridge Resource Management describes BRM as follows:

“Bridge Resource Management is an analytical method that can be used to predict a vessel’s encounter with adversity due to human factors – or be used to avoid such adversity. BRM is simply the study of human behavior in a specific circumstance: humans operating ships. The goal of BRM is to help mariners operate their ships successfully, and it can achieve this goal because human beings have the ability to modify their own behavior. Once we learn what we are doing wrong we can start doing it right.”

BRM makes use of all available resources including equipment, information and human resources to achieve safe operation. BRM can be termed as the effective management and utilization of all resources, human and technical, available to the bridge team, to ensure the safe completion of the vessel’s voyage. The title “team management” is the interaction required within the team for the system to work.

For BRM to be effective, it is essential that a team communicate, monitor and cross check the actions/inactions of each other. Failure to do that may lead to working in isolation, which in turn creates a potential single point failure with a risk of going undetected.

One tragic example where a failure of the bridge team to use BRM led to 33 deaths, was in the loss of the steamship El Faro, which sailed into the path of a hurricane with disastrous consequences. In the National Transportation Safety Board’s (NTSB) published findings, they stated:

“41. By failing to adequately consider the suggestions of the ship’s junior officers to alter the passage plan and failing to alter his decision to proceed, the captain endangered El Faro and its crew.
42. The concepts of bridge resource management were not implemented on board El Faro
43. The company’s failure to ensure the implementation of bridge resource management contributed to the sinking”

Furthermore, the NTSB addressed BRM in their probable cause, which stated:

“Contributing to the sinking was ineffective bridge resource management on board El Faro, which included the captain’s failure to adequately consider officers’ suggestions.”

Being able to understand and adequately determine whether or not BRM was appropriately used, or should have been if it was not, is no easy task. One has to be well versed in its theory and application, since numerous factors affect the effectiveness of a team and could be studied during the investigation of any case. Some examples include the individual’s experience to ensure availability of appropriate skills, and the presence of a reasonable watch schedule which provides a sufficient number of qualified and experienced watchkeepers for each phase of a passage. An entry into port, a passage through heavily congested waters and/or reduced visibility conditions may require more personnel on the bridge and an avoidance of distractions to ensure safe passage.

The well-established publication Bridge Team Management addressed the importance of identifying errors in the lead up to a maritime incident:

Maritime incidents or disasters are seldom the result of a single event, they are almost invariably the result of a series of non-serious incidents; the culmination of an error chain. Situational awareness, i.e. knowing what is happening in and around the ship, helps the OOW or other watchkeeper to recognize that an error chain is developing and to take action, based upon this recognition, to break the error chain.

Certain signs apparent to the members of a bridge team will indicate that an error chain is developing. This does not necessarily mean that an incident is about to happen, but that the passage is not being conducted as planned and that certain elements of situational awareness may be lacking. The vessel is being put at risk and action must be taken to break the error chain.

BRM should ensure that a detailed plan, known as a voyage plan, is in place and understood by all involved. A voyage plan should commence at the berth of departure and concludes at the berth of arrival and should contain two major stages, namely: planning and execution. An incomplete, or a non-existent plan may result in involved personnel not being able to identify a deviation from the plan. It is very challenging to identify a situation which is going wrong unless we are aware of how a situation should develop when executed right. A voyage plan which not executed according to a plan may be the development of an error.

BRM is a widely encompassing system which involves much more than the examples addressed in this article.

The Maritime practice at Robson Forensic is made up of experts from every facet of the industry, from mariners to marine engineers, naval architecture and experts with on-board and on-shore maritime backgrounds. They are frequently retained to investigate collisions and other mishaps that occur on and around the water. From commercial shipping to recreational boating and everything in between, the maritime industry is multi-faceted and diverse. Our experts have the education, training, and hands-on experience to investigate the matter at hand.