In this article, automotive engineer Peter Leiss discusses some of the engineering controls used to protect against CO exposures and the methodologies used by forensic experts investigating these occurrences. 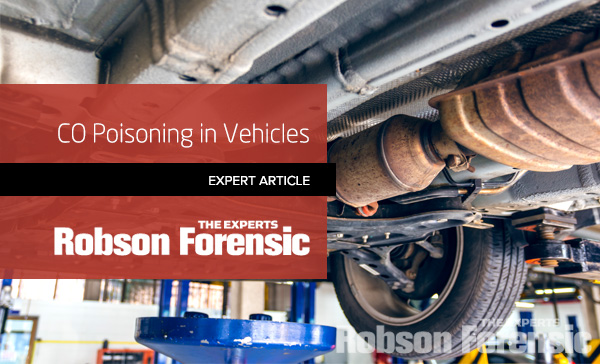 Carbon monoxide (CO) is released as a byproduct of both diesel and gasoline internal combustion engines. It is a colorless, odorless, and tasteless gas that is toxic to humans and animals at concentrations above ~ 35 ppm.

Air safety is a point of emphasis for automotive engineers because the cabin represents a relatively small volume of air, making it susceptible to rapid swings in air quality. The consequences of an exposure are elevated further by the act of driving, wherein even a minor exposure can lead to a serious crash. As a result of the known hazard of CO exposures, automotive engineers utilize three general strategies to protect air quality in and around vehicles:

As a result of strict vehicle emissions regulations in the United States, modern gasoline and diesel burning vehicles tend to emit carbon monoxide and other exhaust gases within a relatively narrow and acceptable range. As a result, most forensic investigations involving unintended occupant exposures focus on where the CO originated and how it entered and concentrated within the passenger cabin.

**There are a variety of CO exposure scenarios involving vehicles and non-occupants. While not addressed in this article, our engineers have experience investigating those incidents.

Determining the Origin of Carbon Monoxide

While a properly functioning exhaust system will divert engine exhaust to an area where it is unlikely to enter the passenger cabin, compromises in the pipe structure or joints can release toxic gases in unintended areas. Failed manifolds and exhaust gaskets, cracks or holes along the exhaust piping, or improperly tightened joints can all result in the unintended release and concentration of toxic gases.

Albeit less common, some investigations have revealed that specific component configurations from the manufacturer or aftermarket vehicle alterations have resulted in design incompatibilities between the exhaust system and vehicle body paneling that stifled exhaust dissipation.

As part of their forensic investigation, our automotive engineers conduct a thorough inspection of the exhaust system to identify points of failure. Our engineers may also utilize processes similar those from industry to test and document exhaust flow dynamics.

Determining How Carbon Monoxide Entered & Concentrated Within the Cabin

Failures in vehicle sealing or the HVAC system can inadvertently introduce contaminated air into the cabin or prevent the introduction of fresh air. Seals located along the firewall and joint sealant anywhere in the underbody are likely areas of infiltration. Engineers may also inspect air intake ports and exhausters (pressure release valves built into the cabin) to determine if fresh air was properly circulating.

During the development of a vehicle, automakers will use computational fluid dynamics (CFD) software prior to vehicles being built and introduce coolant into the exhaust system to produce a visible exhaust stream on prototype vehicles being run under many scenarios/states to demonstrate the exhaust and underbody of the vehicle are designed in a way that does not trap engine exhaust under the vehicle and prevents the engine exhaust from entering the cabin through the body exhausters.

Testing for exhaust infiltration into the passenger cabin can be achieved with a pressurized smoke emitting machine. These machines are commonly used in the automotive repair industry to find leaks in evaporative emissions systems. A smoke emitting nozzle is placed in the vicinity of tail pipe, or near any identified points of failure. This type of testing can be effective at demonstrating pathways by which exhaust entered the cabin.

The automotive experts at Robson Forensic evaluate the performance of vehicle safety systems within the context of a specific incident to determine if they functioned properly. In some cases this involves an analysis of active safety features, such as forward collision warning (FCW) and autonomous emergency braking (AEB), in others it involves an analysis of vehicle restraint systems, including seatbelts and airbags. As complex as modern vehicles are, we have an expert to address nearly every component.

Contact the featured expert or submit an inquiry to discuss your case with an expert.

All vessels, from small recreational boats to large ocean going ships, have safety systems onboard designed to reduce and/or eliminate the likelihood and consequential severity of exposure to…