Marjorie Murtagh Cooke, marine safety expert with Robson Forensic and former director of the NTSB’s Office of Maritime Safety was interviewed by the Portland Press Herald regarding the missing cargo ship, El Faro.

Federal investigators will take a hard look at what went wrong, as seasoned mariners discuss how decisions are made by captains and shipping companies, and note that running into bad weather is common. 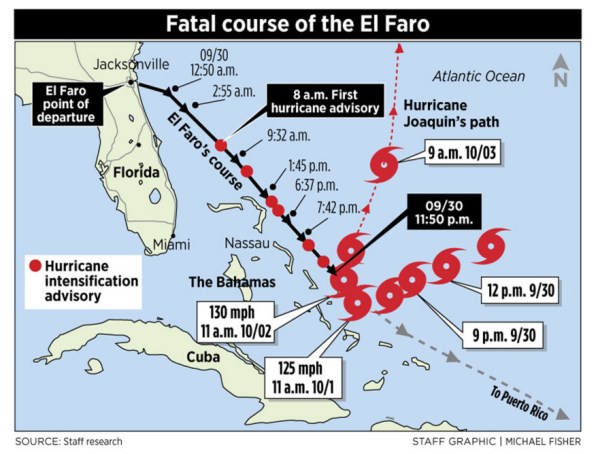 The hurricane that would ultimately sink the cargo ship El Faro was still a tropical storm when the vessel left Jacksonville, Florida, the night of Sept. 29.

The ship was hundreds of miles into its 1,300-mile voyage to Puerto Rico by the time the National Weather Service upgraded Tropical Storm Joaquin to Hurricane Joaquin, packing 75 mph winds, at 8 a.m. the following day.

But ship tracking data show that the El Faro appears to have stayed its course toward the storm’s predicted path even as the weather service issued seven more hurricane advisories over the next 21 hours – each warning of the storm’s growing strength – before the ship’s last known communication near the Bahamas.

Capt. Michael Davidson’s decision to stay the course in an apparent bid to outrun the storm will likely be a key part of the investigation launched Tuesday by the National Transportation Safety Board into what appears to be the United States’ worst commercial maritime disaster in decades. But as frequently happens immediately after such disasters, debate has already begun about whether the captain or the El Faro’s owner, TOTE Maritime Puerto Rico, made fatal calls or whether the ship fell victim to that “perfect storm” of bad luck and the unpredictability of Mother Nature.

Answers to some of those questions are likely months away, if they are ever known.

“They want to document thoroughly the investigation, and it will take time,” Marjorie Murtagh Cooke, who headed the NTSB’s Office of Maritime Safety from 1994 to 2005, said of the federal investigators. “Unfortunately, everybody wants to know what happened immediately, but … it’s a long, detailed process of getting the facts that will lead to not just (NTSB) conclusions and recommendations, but also information that can help make sure something like this doesn’t happen again.”

Cooke, the former director of the NTSB’s Office of Maritime Safety, said that investigation will be even more complicated if the El Faro is not located. However, investigators’ first task will be to collect facts and then get agreement from the various parties – including TOTE and the U.S. Coast Guard – about those facts. Eventually, investigators will present a draft report and recommendations to the board, which will review them during a public process.

Cooke would not speculate about the case or offer opinions about the ship’s course, saying, “We don’t know what (Davidson) knew and when he knew it.

“However, in this case they lost the use of the main engine, and once you lose your main source of power at sea, you are at the mercy of the sea,” Cooke said. “You have no control of the vessel and no power to take the ship away from the path of the hurricane.”

Read the complete article from the Portland Press Herald

The Admiralty/Maritime group at Robson Forensic covers every facet of the maritime industry. Among our experts you can find experienced ship captains, naval architects, a cohort of marine engineers with varying areas of expertise, professors from the finest maritime institutions in the nation, and the former director of the Office of Marine Safety for the National Transportation Safety Board.