In this article, Civil Engineer and construction expert Michael J. Tuttman explores how the essential questions of “Who, What, Where, When, Why, and How” are as important for construction projects as they are for newspaper stories. They are needed to establish the scope of the work involved, and to estimate its cost. When the unexpected happens, resulting in a construction claim, you also have to know how to deal with the “How About.” 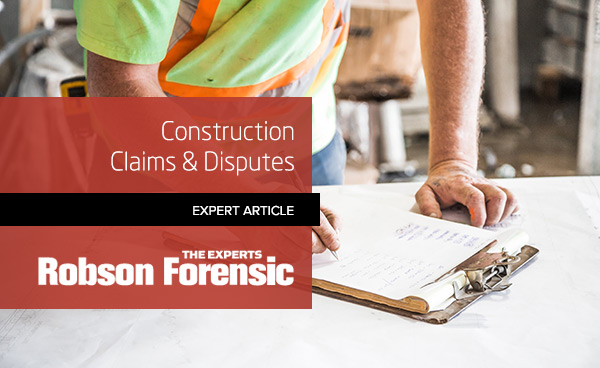 Who: Scope of Work

Who is responsible for doing the work? This sounds like a direct question but sometimes the answer is unclear and, even worse, sometimes the answer is “nobody.” The owner sets the project’s Scope of Work for the contractor who, in turn, can divide that up, taking some for themselves and assigning other parts to subcontractors, services, and/or suppliers. Sometimes important tasks get lost in the shuffle and, often, this only becomes apparent on the day that some item of work isn’t done. These “lost tasks” can lead to construction claims. Such as:

What: Project Plans and Specifications

Construction projects vary from the simple to the complex. However, even simple projects can have their challenges. That is why it’s so important to have well devised plans and, on larger projects, complete and detailed specifications. It is incumbent upon the Owner to completely and accurately detail what their project entails in their Plans and Specifications; otherwise, how else can a Contractor furnish an estimate of costs and bid for the work?

Digging a hole, even a big one, is easy – Right? Trick question. The answer is sometimes, but not all the time. In the Plans, the Owner should specify where and how big the hole has to be (length, width and depth). The Contracted will be guided by these Plans and Specifications so it’s in the Owner’s interest that they be as complete as possible.

Conditions affecting the work, such as restrictions on how or where soil can be disposed of, limits on the contractor’s access, restrictions on work hours, or the presence of contaminated material, should be part of the information provided by the Owner via the Plans and Specifications. Whether or not they are intentional, omissions of relevant facts misrepresent the character of work, can affect the cost of a job, and risk a claim.

Where and When: Scheduling

The Owner says when a project can begin and by when it has to be finished, they sometimes even set Milestones by when certain portions of the project need to be complete; however, it’s the Contractor who schedules the work.

A common method of scheduling work activities on a construction project is the Critical Path Method (CPM). When creating a CPM schedule the project is divided up into separate, distinct work activities, or Tasks, each associated with the estimated amount of time necessary to complete it. The Dependencies of each Task to the others is also determined – in the case of our hole, we can’t begin to dig until the ground is cleared. Bearing in mind that certain work activities can be done simultaneously, using their Dependencies, Tasks are linked together, into different Paths, in the order that they will need to be performed. The longest single Path, measured by time, beginning at the start of the project and ending at its completion, becomes the Critical Path. The length of this Critical Path is the minimum amount of time necessary to build the project.

Sometimes a non-critical path will begin as a branch of the Critical Path and all of them will end connected to the Critical. There will usually be more time than is needed to complete the Tasks on non-critical paths, this is referred to as Float; however any additional time taken, on top of what was estimated, to accomplish any Task on the Critical Path will lengthen the time required to complete the project. It’s important to keep in mind that any circumstance that lengthens the Critical Path could result in the Contractor requesting additional time to finish their work and possibly result in a claim.

The Owner’s Plans and Specifications describe what the project involves, sometimes even specifying construction techniques; however, it’s the Contractor who is responsible for determining the manner, or method, in which the work will be accomplished and what will be used to do the work - this is referred to as the Contractor’s Means and Methods. The Plans and Specifications describe our hole, for example, but it’s up to the Contractor to decide whether it will be dug with a shovel or a backhoe. If the hole is larger and deeper than what can be reached from undisturbed ground then it is the Contractor who figures out how to get the needed equipment into the open excavation, during the course of the project, and how it gets out once the hole is completely dug.

Knowledge of Means and Methods is needed to accurately estimate the cost of a construction project, or to analyze a claim.

Various types of unexpected events and conditions have been defined, and procedures to deal with these have been established. These types of situations include Extra Work, Differing Conditions, and Time Delay.

Within the context of a Construction Claim or Dispute, Robson Forensic is positioned to provide a thorough and comprehensive investigation by addressing every aspect of the case, from improper procedure to estimates of reasonable costs involved, specialty aspects of construction techniques, and forensic investigation of damages claimed.

In this article Civil Engineer Michael Tuttman discusses the locating and protection of underground utility facilities, provides an overview of the various safety measures used while excavating in the…

This article discusses the purpose and importance of the submittal process. The construction experts at Robson Forensic are frequently retained to provide expert witness investigations relevant to a…