In this article, architect and construction expert, Will Martin discusses the role of “transitions” in the investigation of construction claims. Will explains how shortcomings at the physical transitions as well as transitions across construction teams within the jobsite are frequently the cause of failures. 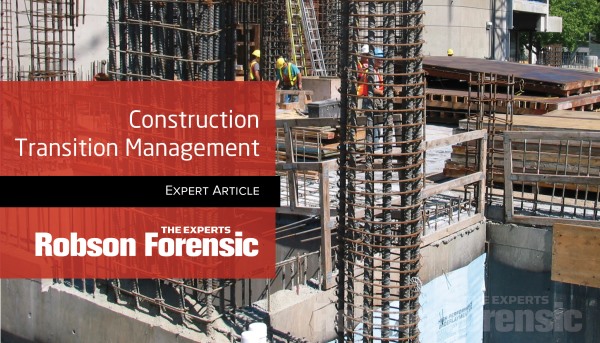 Over the past decade, construction has rebounded from the great recession. In nominal terms, construction is now proceeding at volumes greater than any time in the past decade according to US Census data. More mistakes, disputes, and failures of various kinds that lead to legal action are likely now than in the recent past when construction activity was depressed.

Analysis of those mistakes, disputes, and failures requires digging for underlying causes. A focus upon how materials, parties, and responsibilities fit together provides a framework for that analysis. Common causes for construction defects are transitions between or within materials. A similar analysis is applicable to other issues that arise during development and construction. There are contractual, communication, and coordination issues that can lead to budgetary and scheduling problems, design failures, construction failures, and injuries if they are not properly coordinated.

Transitions exist between sections of like materials and between dissimilar materials. At the simplest level, a building may leak because the materials used to create a weather resistant barrier are not overlapped correctly. Thermal expansion and lateral deflection require expansion joints. A missing expansion joint can cause material failure at a point of weakness somewhere in that material. In the worst case, a poorly detailed joint may cause catastrophic failure due to different rates of thermal expansion.

Materials and assemblies commonly used in construction are governed by trade - specific standards published by organizations such as the American Concrete Institute, American Institute of Steel Construction, ASTM, UL, and others. Problems caused by design flaws and physical joints may or may not be straight forward to uncover and analyze, depending on how they interact. An example is a leak caused by a hollow access ladder into a stormwater detention tank within an apartment building. The hollow ladder allowed water to siphon into an inaccessible hollow space below another part of the building. From there, it followed a construction joint between the concrete retaining wall and then leaked out more than one hundred feet away from the detention tank. The leak occurred several days after a hard rain. The culprit was the series of material and product characteristics and joints that interacted in an unanticipated manner.

The project design team typically includes a number of specialist consultants. The project architect is responsible for coordinating the work of a variety of engineering disciplines whose work is necessary for a functional building or other facility. Those individual engineering disciplines do not have the same overall perspective as the architect, but are instead tasked with creating specific solutions addressing specific requirements within the overall project. Unless their work is properly coordinated, engineers will optimize the systems they are responsible for in a manner that may conflict with other similarly optimized systems.

Structural conflicts with HVAC system space requirements are common, as are specification omissions where electrical and mechanical systems interact and overlap. If these conflicts and omissions are not resolved during the design phase, the result is delays and additional cost during construction.

The design work must be completed, coordinated in a timely manner, and presented in an adequately clear set of contract documents in order for the work to proceed smoothly. As the lead designer, the architect is responsible for ensuring that the documents are comprehensive and that the information in those documents is complementary and complete, but not conflicting.

An example of failure to coordinate the drawings is a duct that had to be redesigned because it projected three feet beyond the sloped roof it was intended to fit under. This coordination failure caused delays to the project schedule and additional costs. The American Institute of Architects and Associated General Contractors provide model contract documents that define the standard of care for design coordination.

The group of model contracts that provide standards for design coordination are coordinated with those utilized to define contractor responsibilities before and during construction. The general contractor’s internal organization can have additional gaps and interactions to overcome.

For example, if the project’s schedule is kept on a specific computer program and the project superintendent is not fully conversant with the way that computer program works, then the schedule must be created and then updated by another individual. If the superintendent and scheduler do not understand the schedule in the same way, problems may crop up. The owner may be set up for false expectations. The general contractor may under- or overestimate the schedule impact of a change during construction or may attribute unrelated schedule impacts to a decision by the owner or designers.

Sequential coordination failures are especially pernicious. An example is an anchor bolt problem that started with poor drawing coordination on the part of the designer and is followed by poor coordination between concrete and steel structure in the field. The designer failed to consider the congested nature of the reinforcement at the tops of concrete columns when the anchor bolt connection was designed and detailed. The contractor then failed to prepare coordination drawings that would have discovered the inherent conflicts caused by the uncoordinated design drawings. The failure to coordinate design or construction came at the connection between two structural systems. The overlapping failures to coordinate the transitions between materials in the design, between design and field, in the field between subcontractors, and then between materials in the field caused extra cost, extra work, and delays. It ultimately cost everyone involved time, money, or both.

Another project example demonstrates the effect of multiple overlapping contract and authority splits. On a single federal project, the contracting authority was split between two branches of the same agency, located in different parts of the country. The project included work on two different sites, with one site split into two projects with different designers. Two prime contracts were let for the work, but in a manner that had one of the prime contractors working for both agencies, on both sites, with both designs.

The two designs were not coordinated because there was no overriding design authority to bridge the gap between them. The way the contract was divided between two prime contractors caused disputes between the contractors and resulted in additional delays and cost overruns. The fact that the project was split between two separate jobsites was a minor problem relative to the lack of rational central controls that the project suffered from. The results were a nearly twelve month completion delay and large cost overruns.

Inside and Outside the Fence

For the safety of the general public, the transition must be scrupulously maintained. The ANSI A10 series of standards addresses jobsite safety, including maintenance of safe conditions adjacent to jobsites. Other applicable standards include the U.S. Army Corps of Engineers Safety and Health Maintenance Manual EM 385-1-1 and the Manual for Uniform Traffic Control Devices.

Physical transitions are a cause for defects in construction. Contractual, communication, and incentive issues are as likely to cause disputes on a construction project. Uncoordinated or unmanaged transitions are often the underlying cause for defects and disputes. When defects and disputes arise, analysis of the transition and those parties responsible for managing and coordinating the transition affords an effective way to gain insight into what went wrong and why.

When a project has problems severe enough to require legal intervention, the complexities of the situation can seem daunting. The cause often manifests as a relatively simple failure at a joint or transition, whether the joint is physical, contractual, or internal. Underlying poor workmanship or coordination will result in additional cost and time.

Analysis by an individual experienced in the construction process and its pitfalls can speed resolution by cutting through the complexities and arrive at what is often a straightforward underlying failure.

The experts at Robson Forensic are architects and engineers who have decades of experience with the complexities associated with design and construction projects of all types and sizes. Our experts can analyze what went wrong, why, when, and which parties were responsible to make sure that it didn’t happen.

Conceptually, rainscreen systems are an evolution of long tested techniques like shingles and lap siding, but with the addition of a drainage plane between the siding and an inner waterproof membrane.…

In this article, architect & construction expert, Will Martin discusses the project owner’s role in promoting safety on and around the construction site. Our experts are frequently retained…

After many years of depressed activity the construction industry is experiencing a renewed vigor. Along with a positive economic boost for the industry, the resumption of construction activity will…