In this article, Catherine Peterman, AIA, NCARB, provides an overview of construction project delay claims and the way a forensic analysis is conducted to determine the cause of a delay and quantify the damages. 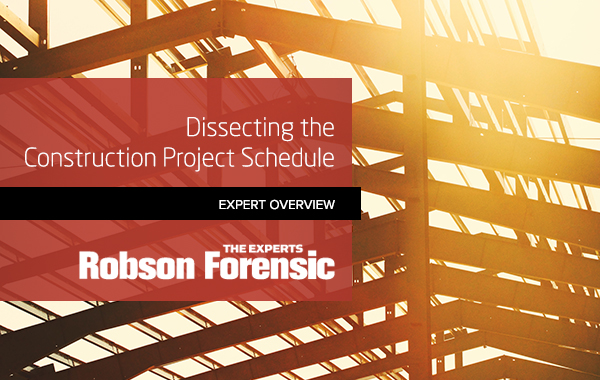 A large commercial general contractor may have a construction scheduler who develops and updates the project schedule. The project manager may also develop and maintain the overall schedule. The most common schedule is the critical path method (CPM). In a CPM schedule, construction activities are connected, including submission and review of submittals. A well-developed schedule will show that one activity can start only after another is complete, or at least started. There may also be lag times, for example, the lag between concrete placement and removing formwork due to the time concrete takes to set and achieve design strength. The overall project schedule, generally created using specialized software, is a powerful management tool for contractors and owners. In addition, field supervision personnel often maintain more informal “look ahead” schedules for day-to-day operational control on the job site.

Extension of Time or Delay Claim

The second type of claim is a loss of productivity claim or disruption claim. A disruption claim arises when the owner interferes with a scheduled activity. An example would be the selection of materials or drawing review. Because the owner delayed the activity or altered the work, the contractor can claim that their work is different from originally scheduled and bid.

Lastly, an acceleration claim arises when the owner requires the contractor to accelerate work to finish the project earlier than scheduled. The contractor can claim costs to accelerate the work, such as overtime, additional workforce, and increased costs to expedite materials.

A contractor may claim acceleration claims, delay claims, and extension claims together, and hence schedule disputes become complicated and frequently arise on construction projects. The owner and contractor should keep updated schedules and communicate regularly to avoid these claims. When the communication breaks down to the point that the dispute turns into a legal matter, the schedules and schedule updates often reveal causes, especially when compared to other documentation and information that can confirm or refute the information within the schedules. Extracting useful information from the schedules requires an in-depth analysis, including working through the logic used to generate the initial schedule and the changes to that logic in schedule updates.

The Process of Forensic Delay Analysis

One of the more commonly used methods to determine delays is constructing an updated project CPM schedule. The analysis starts with the baseline CPM schedule and continues through the available updates, monitoring progress along with the critical or near-critical activity intervals. This methodology is often called a “window” analysis because it looks at the activity intervals.

In the long run, the window analysis method uses the known schedule updates and the as-built data to quantify the delay impact. For this reason, this method depends on a well-established baseline schedule, progress updates, and verifiable as-built data.

For nearly any issue, Robson Forensic can assemble a tailored team of construction professionals to provide a thorough and efficient investigation. Our ability to analyze construction documents and evaluate the performance of construction parties allows our experts to identify liability, quantify damages, and assist in resolving disputes in a timely and cost-effective manner.

In this article, experts from the architectural practice at Robson Forensic provide an overview of error and omissions change orders. The discussion includes an explanation of change orders, the…

This article provides an introduction to BIM and discusses how this relatively new technology is likely to affect the landscape of construction litigation in years to come. Construction Disputes and…