The process of admitting new prisoners into a correctional setting is one of the most important components of operating and maintaining a safe and secure facility. This intake process occurs at a central access point of the facility where all incoming prisoners enter. It is often the first opportunity for correctional staff to gather essential information regarding a prisoner’s medical status and history, for both physical and mental health. This article reviews the standard of care for prisoner intake at correctional facilities by examining a hypothetical fact pattern. 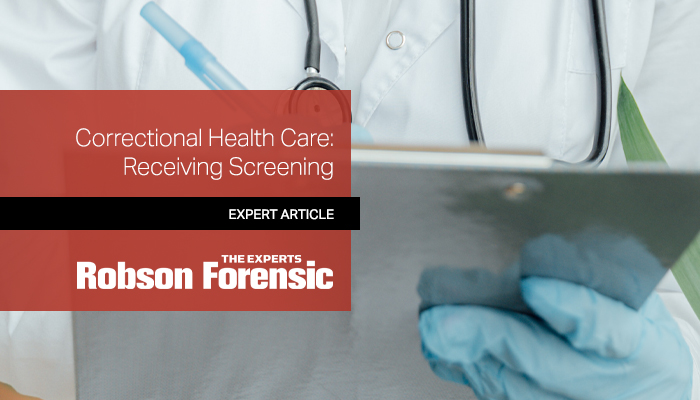 It is not uncommon for prisoners to arrive at intake with varying degrees of consciousness due to alcohol and drug intoxication or injury; some requiring emergency room care prior to being accepted into the facility; and others experiencing acute medical emergencies that require an EMS response. Failure to recognize and/or act in these situations can have devastating consequences for the prisoner and the agency.

As identified by the U.S. Department of Justice, National Institute of Corrections, Correctional Health Care: Guidelines for the Management of an Adequate Delivery System (2001 Edition):

The requirement for receiving screening may well be the single most important standard for correctional facilities to meet. It represents the first opportunity health care staff have to gather basic information about the inmates they will care for as patients. The intent of this standard is to ensure that inmates with serious health needs (e.g., chronic or communicable diseases, mental illness, alcohol withdrawal, suicidal ideology) are identified rapidly and appropriate follow up care provided so that continuity of care can be maintained and potential medical emergencies averted.

As identified by the National Commission on Correctional Health Care, Standards for Health Services in Jails (2018):

Screening is performed on all inmates upon arrival at the intake facility to ensure that emergent and urgent health needs are met.

Many, but not all jails throughout the United States have medical professionals on-site 24 hours per day. In instances where medical staff is not available, security staff is tasked with conducting the medical receiving screening of the prisoner prior to acceptance into the facility.

In either case, when an arresting or transporting officer presents a new prisoner to a jail or receiving facility, it is incumbent upon the receiving staff to inquire about the prisoner’s current medical and mental health status with the arresting officer. This inquiry should consist of ascertaining facts regarding any pre/post-arrest injuries that the arresting officer is aware of, drug and alcohol use, detoxification issues, along with any statements or actions regarding potential suicidal ideations that the prisoner may have made or displayed.

If medical staff is not on-site, corrections officers/jail deputies should also be observing the prisoner and asking them questions in accordance with established agency medical receiving screening policies, procedures, and training. If medical staff is on-site, the outcome of these inquiries and observations should be communicated to the medical team as they will be responsible for conducting the receiving screening and providing medical clearance to accept the prisoner into the facility.

A male prisoner involved in an alcohol related automobile accident, as the driver of the vehicle, prior to arrest was admitted to a jail facility with obvious signs of head trauma. EMS responded to the scene of the accident but did not transport the individual to the hospital. Instead, they provided medical clearance for the arresting officer to transport the prisoner to jail.

The prisoner refused to take a breathalyzer test and was charged with driving under the influence. The arresting officer assisted the prisoner while walking into the facility as the prisoner’s gait was unstable. Upon presentation to the jail facility the arresting officer advised jail staff of the charges against the prisoner, the automobile accident, EMS’s medical clearance of the prisoner, and their own observations of the prisoner being unstable. While undergoing the intake process, the prisoner appeared lethargic and unsteady, and asked jail security staff if they could lay down. Jail staff allowed the prisoner to lay down inside of a holding cell and advised medical personnel, who responded to the holding cell to assess the prisoner. The prisoner appeared cooperative and insisted to all staff that he was fine, and just wanted to lay down for a while. Other than this short interaction with the inmate, medical and correctional staff did not conduct a medical receiving screening, and the inmate was allowed to lay down and go to sleep.

Over the course of the next several hours correctional officers conducted well-being checks of the inmate, who appeared to be sleeping. During this same time, the inmate’s condition slowly deteriorated to the point of a medical emergency. Corrections officers took notice and activated the emergency medical system. The inmate was subsequently transported to the hospital via ambulance where they were diagnosed with a closed head injury. Their condition continued to worsen, and they ultimately died.

Was the standard of care met?

In addressing the fact pattern in this hypothetical instance, a reasonable response by the receiving facility staff would have been to ensure the receiving screening was conducted as required and/or refuse admittance of the prisoner without medical clearance from a hospital/emergency room. The failure to ensure that either of these occurred by staff, placed the inmate in a hazardous situation which ultimately contributed to the inmate’s condition worsening to the point of a medical emergency.

Forensic investigations of incidents similar to the scenario in this article may consider several factors to determine if the involved parties met the standard of care. Common materials that would typically be reviewed include policies and procedures, training records, medical records, video surveillance, trauma protocols, well-being monitoring notes and forms, and other relevant documents.

Paul Adee is a police practices and corrections expert with over 32 years of experience in correctional and courthouse facilities. Paul applies his expertise to forensic casework involving the… read more.

Rebekah Price is a Board-Certified Family Nurse Practitioner and Registered Nurse with over 15 years of experience in patient care and regulatory compliance. She has hands-on experience in a multitude… read more.

Most states have a limited exemption regarding traffic laws for police officers driving during an emergency. States recognize the importance of providing police officers the ability to respond to…

The use/non-use of Body Worn Cameras (BWCs) by law enforcement may be called into question in a broad range of civil and criminal disputes. In this article, police practices expert Mark Meredith…

In this article, the health care experts discuss the process by which adverse medical events are evaluated by medical professionals and forensic experts. The article describes the concept of an…