In this article we revisit a case in which a building owner claimed that damage to his building was caused by vibrations associated with a construction project on an adjacent property. 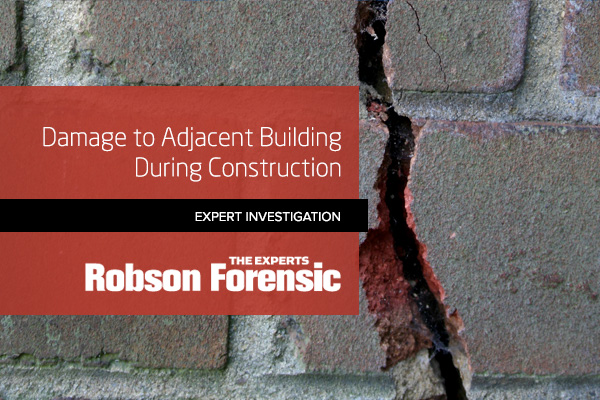 While construction was being performed on an adjacent site, the owner of an 80,000 square foot, two story office building complained repeatedly of vibrations in his building. After the construction was over he later claimed to have just discovered significant damage to his five year old building that could only have been caused by the vibrations. We reviewed the claimed damage, the original construction drawings for the owner’s building and the history of the adjacent construction.

We showed that while there were cracks in the plaintiff’s building, they were not caused by the adjacent construction. The reports of vibration were coincident with use of a vibratory rollercompactor, first at the new building and later to prepare the parking lot subgrade. We evaluated the contractor’s equipment and showed that while its vibrations might be felt next door, the energy and frequency of those vibrations was well below thresholds necessary to damage the structure.

We also diagnosed the claimed damage which was primarily vertical cracks in a long brick façade. The cracks were concentrated at an interior corner in the façade in a pattern demonstrating localized settling of the foundation. The degree of settling was actually not unusual for this type of building and would have been easily accommodated by appropriately designed control joints. However, there were no joints in this building wall that was more than 100 feet long. We explained how control joints were necessary for this type of construction, and they had in fact been shown on the original building drawings. It was discovered that the Plaintiff building owner had acted as his own builder and it had been his decision to eliminate the joints.

In this document we highlight some of the most common causes of deck failures and steps that can be taken to safeguard against such failures. Residential Deck Failures Based on data from the Consumer…

In this short article, Civil Engineer, Brent Leisenring, P.E., retells the details of a heavy rigging project that he was responsible for managing prior to joining Robson Forensic. Brent now applies…