In this document we highlight some of the most common causes of deck failures and steps that can be taken to safeguard against such failures. 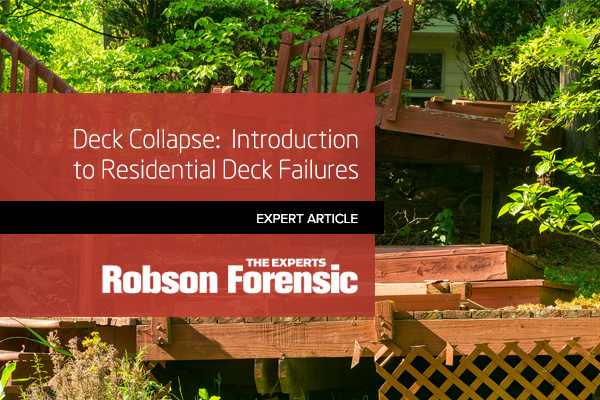 Based on data from the Consumer Product Safety Commission, more than 6,000 people are injured each year in incidents involving the structural failure or collapse of a deck or porch. In recent years the experts at Robson Forensic have investigated more than 50 such incidents. In this document we attempt to highlight some of the most common causes of failure and steps you can take to safeguard your investment and your family. 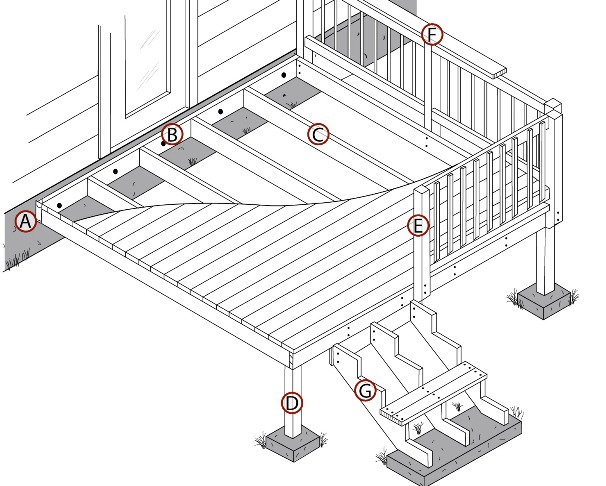 In support of a technical discussion regarding the failures or defects of the deck in your case, we have provided accepted industry vocabulary below:

Pulling Away From the House

Structural failures also occur involving the support posts and deck joists. Primary Questions: Were the posts sized correctly based on overall height? Were the post foundations installed below the frost line, and did it follow the ‘7 Foot Rule’? Was proper lateral bracing installed on each post? How were the deck joists attached to the ledger board? Did the contractor use the correct hardware?

There are more injuries related to railing failures than any other portion of a deck. Investigations often reveal that railing posts were not installed correctly and could not withstand the specified lateral load requirements. Primary Questions: Did the design/construction use the appropriate connections? Have railing posts been modified at the base? What is the post spacing? Were railings built to the appropriate height, with correct baluster spacing?

A properly designed and constructed deck can support a reasonably expected load of people, snow and objects (40-60 PSF). The design must also be able to resist the lateral and uplift loads that are generated by people, wind, or seismic activity. Railings must be able to safely resist a 200 pound lateral force.

The North American Deck and Railing Association has established May of each year as “Deck Safety Month” as the time for homeowners to inspect their deck. NADRA provides a 10 point checklist for deck owners. The following is a summary list that highlights deck components and areas that should be inspected annually:

While most people have used ladders, few people are familiar with the proper terminology to describe the components of a ladder; for this reason, the experts at Robson Forensic have created this…