In this article, Forensic Document Examiner, Mark Songer provides an overview of the cases where forensic document examination can be applied, the techniques and technologies used, and standards that exist in the field. 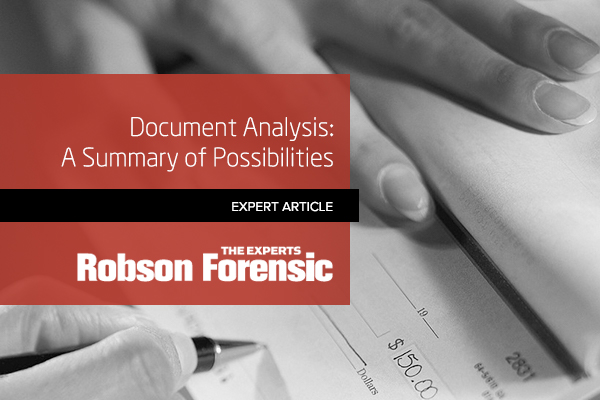 In 2010, an intruder broke into the home of an elderly couple living in California. The couple was robbed, beaten, and forced to write checks from their personal account before being murdered. A few days later, police arrested a man trying to cash several of the couple’s checks. The suspect denied having anything to do with the murders. He claimed the checks were payment for landscaping work he had done for the couple two weeks earlier.

While detectives were able to link the suspect to the crime scene using DNA evidence, they still had questions about the checks the suspect attempted to cash. Could one of the victims have written the checks? If so, was it possible to discern if the writer was under duress at the time?

Police contacted a forensic document examiner, also referred to as a handwriting expert. The expert examined several example or “exemplar” checks written by the victims. Those checks were compared with checks the suspect had attempted to cash. The examiner determined that the wife had written those questioned checks. Upon closer inspection, the examiner observed significant differences in the wife’s known writing style compared with that of the questioned checks, which contained a significant amount of tremor, pen lifts, and other features indicative of “unnatural’’ writing. Taking into consideration that the woman had been found gagged and beaten, the examiner concluded that the checks had probably been written under duress.

After being presented with the overwhelming evidence against him, the suspect confessed to the murders and was given a death sentence.

Incidents of financial exploitation frequently leave an evidentiary paper trail. Signatures, checks, and other documents can be analyzed and compared to determine if they are genuine, counterfeit, or altered. However, many attorneys do not recognize the significance of document evidence, which could provide the “smoking gun’’ in many cases. Questioned document cases and techniques can be traced back to the 3rd century and have evolved with the advancement of technology, research, and development. The examiner is constantly trying to stay one step ahead of the criminal mind as the latter attempts to create, alter, or manipulate everything from contracts to currency using sophisticated software programs and the sheer power of innovation.

In medical malpractice matters, examinations for the presence of indented writing are conducted by side lighting, photo-graphic techniques and the use of the Electrostatic Detection Apparatus, most commonly referred to as an ESDA. This powerful piece of equipment can in some cases determine if records or patient notes have been altered. Procedurally nondestructive in nature, this device can detect indentations or impressions several layers below the top sheet, and many years after the indentations were created. Furthermore, computers, facsimile machines, photocopy machines, and (though they are less commonly used these days) typewriters can sometimes be traced to their source.

Although there is an element of subjectivity in the field of forensic document examination, an examiner’s findings reflect more than mere opinion. Findings must be supported by valid scientific investigation. The premise of handwriting identification is based on the principle that no two writers share the same combination of handwriting characteristics. Hand-writing is a complex motor skill consisting of sensory, neurological, and physiological impulses. Through practice and repetition, writers inject their own characteristics into their writing. This becomes a pattern of habitual formations that are repeated from one writing to the next. This habitual repetition in writing is referred to as “variations,” which are natural deviations that are repeated in a person’s writing. This is what makes each person’s writing unique and individualized.

In addition, the document examiner takes into consideration a wide variety of individual characteristics including letter construction, proportion, spontaneity, spacing, slant, and the use of punctuation, spelling, and grammar. A writer’s identity cannot be established through a single individual feature; rather, it is established through a combination of significant and unique identifying features absent any significant differences. Examiners also analyze the source of paper which may contain handwriting, markings, printing, or graphics. Tests are conducted on color, thickness, weight, the presence of watermarks, weave patterns, and fiber. Ink can also be analyzed as well to determine its source or in some cases the sequence of intersecting pen strokes.

According to Skip Palenik, President and Senior Research Microscopist at Microtrace Laboratories, inks often play a crucial role in the solution of document examination problems. In many instances it is possible to compare links(1) from different documents or different pages of the same document by purely optical methods, using a variety of wavelengths of light combined with appropriate filters. Most document examiners possess instruments that can be used to perform and document such examinations. If two inks cannot be distinguished by purely optical methods and suspicion still exists that they are not the same, chemical methods of analysis come into play.

Chemical analysis of inks formerly required that liquid reagents be applied to the ink line by fine pipettes or that punches through the paper carrying an ink line from a suspicious entry be removed and tested. Analytical methods now have been developed for removing single paper fibers under a microscope and then testing the ink on it using physio-chemical instruments such as infrared micro-spectrophotometry, x-ray spectroscopy and Raman micro-spectroscopy. Such methods are virtually non-destructive and provide a variety of chemical and elemental data that can be used to characterize or identify the components of dried ink for comparative or dating purposes.

The accuracy and precision of ink dating depends primarily on the interval involved. Old ink formulations are well documented and high quality chemical analysis has shown to be of great value in helping to unmask, for example, fraudulent signed sports memorabilia. Absolute dating of modern inks, however, has proven to be one of the great quests of modern document examination. It is rare to be able to assign an absolute date to an ink line, but it is possible in certain cases because of specific circumstances. Relative ink dating is most commonly employed in document examinations when the dates of entry are in question, though the various methods used to conduct such examinations all have intrinsic problems or require that certain assumptions be accepted, which usually leaves the results open to justifiable criticism.

Another area involving scientific analysis of inks is in the determination of the order of ink entries. This problem has been studied by document examiners for over a hundred years. While there is no general solution to the problem, it is possible in almost every instance to provide a good analysis if both sides permit the micro-analyst to remove the requisite specimens and subject them to the appropriate test methods.

With respect to electronic documents, Matt Peterson, a forensic computer examiner with Seattle-based Robson Forensic, explains: “Not all devices and applications scan and process files the same way. Many leave telltale artifacts either on the scanned image (watermarks, for example) and/or embedded in the metadata of the file.’’ Metadata is information that describes specific attributes of a file, and may contain information describing the specific device or application that processed the file. Metadata also includes the date and time the file was created. When validating digital scans, it is important to look not only at what is present but also at what is not present. For this reason alone, it is imperative that the digital file of a scanned document be preserved correctly so that the metadata is unaltered. The proper handling and preservation of any evidence should be discussed with your expert prior to shipment or delivery.

Document examiners go through rigorous training to learn how to scientifically analyze documents to determine authenticity. Most government-trained examiners as well as private examiners, complete a two-year, full-time training program or apprenticeship. Peer group interaction is available through various organizations which encourages on-going training and education.

The American Society for Testing and Materials (ASTM), a global leader in the development and delivery of voluntary consensus standards, publishes standards for methods and procedures used by forensic document examiners. In addition, the National Institute of Standards and Technology (NIST) created the Organization of Scientific Area Committees (OSAC) for Forensic Science, which is composed of both government and private examiners selected based on their expertise, contributions and competency in the field. The purpose of this committee is to develop guidelines and standards which are consensus-based and supported by sound scientific principles.

Document examiners must also meet the criterion of reliability as outlined in the Supreme Court decision Daubert v. Merrell Dow Pharmaceuticals, 509 U.S. 579 (1993). These factors include the following:

Numerous papers and research studies have been published in peer-reviewed publications on the individuality of hand-writing and other issues related to the examination of documents. Some of these articles and studies can be found in the Journal of the American Society of Questioned Document Examiners, the Canadian Society of Forensic Science Journal, and the American Academy of Forensic Science. Like many other scientific disciplines, peer-reviewed research is continuous and rapidly evolving in this field of study.

In this article, Forensic Document Examiner, Mark Songer discusses the role of document examiners within the context of construction disputes. The article highlights examples of “cut and…