In this article, Forensic Document Examiner, Mark Songer discusses the role of document examiners within the context of construction disputes. The article highlights examples of “cut and paste” forgeries and provides background into the processes and techniques utilized as part of the investigation.

Mark conducts document analysis involving a wide range of cases stemming from various industries. Please contact Mark to discuss your case and how he can assist. 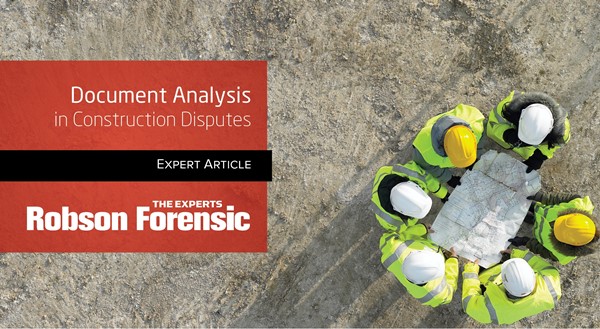 A worker is injured on the job. Because this worker is a subcontracted employee, he brings a claim against the general contractor (defendant) who then names the subcontractor (plaintiff) as a third-party defendant. This complaint filed against the plaintiff by the defendant, claimed contractual indemnity based on a signed Contractor/Subcontractor Agreement. The plaintiff denied having ever signed the document. Both parties retained forensic document examiners to address the validity of the questioned signature. The defendant’s expert testified that the signature appearing on this document was signed by the plaintiff. Plaintiff’s expert agreed that the signature was indeed his client’s but was actually a result of a “cut/paste” from a legitimate signature which was found by plaintiff’s expert on another document. Examination of this document revealed it was written years prior to that of the questioned document. Based on the insurmountable amount of forensic evidence, the jury returned a verdict in favor of the plaintiff.

Documentation is a critical component in many legal disputes, extending far beyond construction cases. The presence of forgery or fraud in documents that establish business relationships and other contractual duties can drastically affect case outcomes. Proper review of documents should be performed by a forensic document examiner, whose primary function is to:

Handwriting is a complex motor skill consisting of sensory, cognitive and physiological impulses. It can be demonstrated that no two writers share the same unique combination of handwriting characteristics. Through practice and repetition, writers interject their own individual style into their writings which become a pattern of habitual formations and deviations that are repeated from one writing to the next. This is referred to as “variation”. In the case example above, natural variation could not exist due to the fact that both signatures were identical to one another. This defies one of the fundamental principles of handwriting identification that no two writings are ever exactly alike.

Other opportunities for forgery in the construction industry include building permits, building inspections, safety training cards and invoices and billing documents. Other factors relating to construction fraud include fraudulent resumes resulting in the employment of unqualified personnel and lack of certification of the personnel.

An AIA Document D401-Certification of Document’s Authentication was submitted for analysis. This document acknowledges that the person signing the certification made changes to the base document reflecting any additions or deletions in the report. It is widely accepted and used in the construction industry.

The scope of my assignment was to determine if the document had been altered or manipulated. The person who purportedly certified the document admitted the signature appeared to be his as well as the printed word “CEO”. However, he was adamant that he did not sign the questioned document on the purported date “11/17/2014” (Fig.1).

Microscopic examination of the document revealed it was a photocopy and not an original. It is always best practice to ensure that originals are examined if made available. In this case, only a photocopy existed, but was still sufficient and suitable enough for examination purposes. Not all cases are created equally and certainly not when it comes to photocopies. Each examiner must determine individually the inherent limitations imposed in reviewing photocopied documents.

The questioned document was examined using a transmitted light box which provides even illumination of the subject from below through a translucent cover and fluorescent lights. A measuring grid was placed on top of the questioned document and adjusted for alignment. In Figure 2, the signature and date lines appear not to be in full left alignment in comparison with other portions of text which are aligned and in agreement with one another. The examiner must also take into consideration the possibility of printing distortion when analyzing documents that have been photocopied multiple times. However in this case, the alignment deviation was far too significant to ignore.

Microphotographs of the questioned signature, title and date were taken and compared to one another. As seen in Figures 3 & 4, it can be seen that line quality characteristics are not shared with the “dated’ entry appearing in Figure 5, which exhibits far less degradation in its line quality. 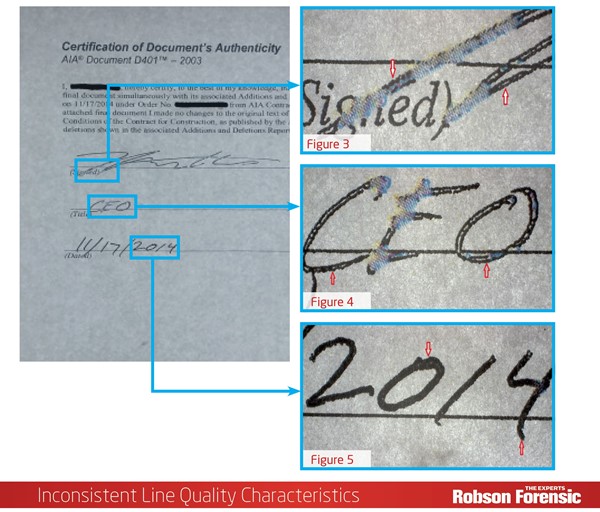 In conclusion, it was determined that the purported “signature and ‘title” were removed from a legitimate document and inserted onto the questioned document and then dated. In cases involving potential “cut & paste issues’, every effort should be made to locate the genuine signature (model) used in the deception. However, should the “model” not be located, a qualified opinion can still be rendered if supporting facts are tested and verified through an objective scientific methodology. It is important to recognize that documentation is the basis in which all disputes or claims are constructed. Proper handling and storage of all potential documentary evidence is crucial and could be the most significant piece of evidence to support or refute your claim.

A former FBI Special Agent who was also a Forensic Examiner within the FBI’s Questioned Documents Unit spearheads our Questioned Document Examination (QDE) practice. We are engaged in a broad range of QDE cases ranging from homicides to white collar crimes. For more information submit an inquiry or contact the author of this article.