This article discusses the optimal body condition to promote successful breeding in horses. The animal science experts at Robson Forensic investigate a broad range of nutritional and behavioral issues involving horses and other animals. 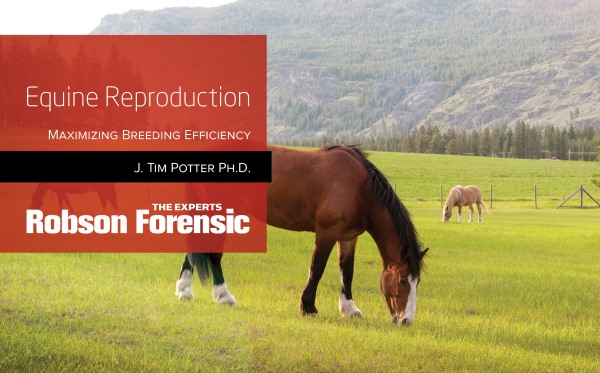 Maximizing Breeding Efficiency in the Mare

The primary objective of most horse producers in breeding operations is to produce as many foals as possible. The number of foals born in an operation will greatly affect the profitability of the breeding farm, and it is imperative that conception rates and foaling rates be high in order to accomplish this objective. While many factors play a role in the reproductive efficiency of the broodmare, two areas of critical importance are nutritional management to maximize reproductive performance and manipulation of the photoperiod of the mare.

Nutritional Management of the Broodmare

Several years ago, a common practice utilized in broodmares was that of “flushing,” or feeding the mare to gain weight while breeding. This practice was implemented largely to misinterpretation of data published from South Africa (van Niekerk, 1972). In that study, two groups of mares were utilized, one group that was maintained on pasture alone and one that was fed a concentrate supplement. The mares fed concentrate during breeding gained weight, and ovarian activity was greater in this group as opposed to the group on pasture alone. As a result, it was assumed in the horse industry that all mares should be fed to gain weight during the breeding season. Many mares that came to a breeding farm in moderate body condition were placed on a diet that promoted a loss of weight, and subsequently fed to gain weight once breeding commenced.

Because of the practices employed in the industry regarding nutritional management in the mare, studies were conducted to evaluate the effects of dietary energy intake on the reproductive performance of the mare. Henneke et al. (1983) developed a body condition scoring system to monitor the level of body condition in the mare. This system is a management tool that can aid horse producers in evaluating body condition, and condition scores range from one to nine, with one being extremely emaciated and nine being extremely fat. 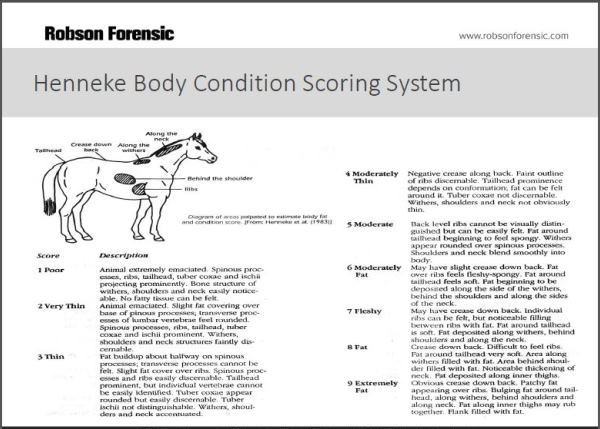 Once mares are diagnosed as being in foal, it is important that a moderate level of body condition be maintained to allow the mare to carry the foal to term. Mares in early gestation are often subjected to limited amounts of feed. Similarly, timid mares will not always compete for limited feed in a group feeding situation. Potter et al. (1985) conducted a study to evaluate the effects of dietary energy intake on fetal loss rates in early gestation. Upon diagnosis of pregnancy at 14-18 days post-ovulation via ultrasonography, mares were assigned to one of two groups. The control group was fed to maintain a body condition score of six or better throughout 90 days of gestation, and the treatment group was fed a diet that was low in dietary energy, to promote a weight loss of 1.5-2 pounds of body weight per day. At the conclusion of the study at 90 days of gestation, all control mares had maintained the pregnancy. In the group fed the restricted energy diet, a 30% fetal loss rate was observed. Results from this study indicated that mares should be maintained at a moderate level of body condition in early gestation to optimize the mare’s chance to maintain the pregnancy.

The role of excessive fat or obesity during pregnancy and parturition has been debated for years. It was believed that obesity would increase the incidence of dystocia and decrease rebreeding efficiency in many species, including humans. It is not economically feasible nor safe from a nutritional standpoint to feed a mare to become obese. Still, cases exist in the horse industry of the pathologically obese mare. The feeling of most horse producers was that the obese mare would be difficult to manage in a breeding operation because of dystocia and lowered rebreeding efficiency. Kubiak et al. (1987) studied the effects of obesity on reproductive performance in broodmares. Mares in late gestation were utilized, and the control mares were fed to maintain a body condition score of six. The mares in the obese group were fed to achieve a body condition score of nine, the upper limit of the body condition scoring system. Results from this study indicated that there were no differences in the control and obese groups in the incidence of dystocia, cervical and vaginal bruising, foal weights, or rebreeding efficiency. While it is not recommended to feed a mare to become obese, obesity has no detrimental effect on the reproductive performance of the mare.

The mare is a seasonal breeder, and her reproductive capabilities are maximal during the longer days of the year. When daylength shortens in the fall, the mare goes into the winter anestrous period, and normal cyclicity is abolished during this time. In some portions of the horse industry, production of foals early in the year is vital to the operation in order to be competitive in futurities and sales. The photoperiod of the mare, or the amount of light she is exposed to, can be artificially manipulated to the extent that the mare will cycle early in the year.

The objectives for using an artificial lighting system are to promote earlier foaling, distribute the book of the stallion, and to effectively extend the breeding season for problem mares. Various studies have reported the effects of artificial lighting program on days to first post-anestrous ovulation, ovarian activity, and gestation lengths. Kooistra and Ginther (1975) reported that mares under a lighting scheme of 16 hours light:8 hours dark had a shorter interval to the first post-anestrous ovulation than control mares or mares that were under 24:0 or 9:15 light:dark ratios. Sixteen hours of daylight corresponds to the period of the year when daylength is longest. When mares are placed under lights, it is necessary to provide approximately two foot-candles of light, or the amount of light necessary to read a newspaper. Hodge (1982) reported that pregnant mares placed under lights prior to foaling had shorter gestation lengths than mares in the control group.

If the objective of the breeding program is to breed mares early in the year, the mares should be put under lights approximately two months prior to the desired commencement of breeding. The biological basis for photoperiod stimulation is that the mare will respond to a burst of light approximately 9-10 hours after dark. Studies have shown that a single burst of light at this time of one hour duration will stimulate the mare in the same manner as extending the daylength with lighting. The feasibility of this approach is limited, and most horse farms will have the mares under lights from 6-10 p.m., with slight variations occurring according to the time of sunrise and sunset.

The energy status of the mare is critical to ensure reproductive success. Use of the body condition scoring system to palpate and visually estimate body fat is a reliable indicator of body condition, and it is recommended that broodmares should maintain a body condition score of five or higher to promote high conception rates, fewer cycles per conception, and lower incidences of fetal loss. While it is not economically feasible or nutritionally safe to feed a mare to obesity, obesity has no detrimental effect on foaling difficulty or breeding efficiency in the mare. Extending the photoperiod of the mare by artificial lighting promotes earlier foaling, aids in distributing the book of the stallion, and extends the breeding season for problem. Gestation lengths are shorter in mares that have been managed under lights, as is the interval to the first post-anestrous ovulation, or the transitional ovulation. Mares should be placed under lights nightly beginning approximately two months prior to foaling or the start of the breeding season.

Robson Forensic provides specialized forensic experts to investigate a variety of issues involving animals, animal facilities, and their interactions with people. Our experts approach this casework from the perspectives of trainers, facilities owners, nutritional specialists, and more.

Submit an inquiry to discuss your case and how Robson Forensic can assist.

This article discusses issues related to the contamination of animal feeds. Topics of discussion include the causes and consequences of contaminations, and how feed manufacturers should respond in…