In this article, Structural Engineer Anthony Volonnino, P.E., discusses excavation engineering, the common issues that arise with excavations in urban settings, and some of the failure points that we consider in our forensic investigations. 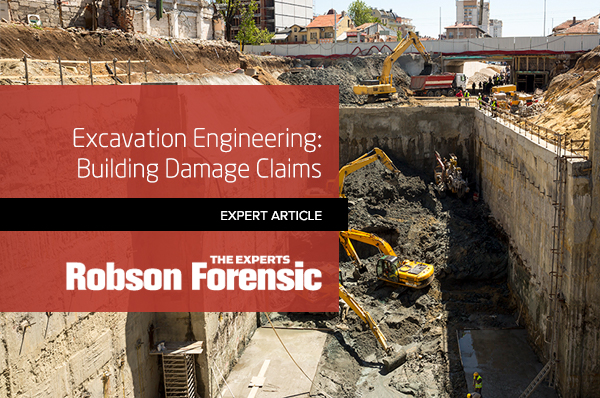 When Is Excavation Engineering Needed

Buildings rely on surrounding soils for support. Disruption of those soils can cause significant damage in the form of settlement. Therefore, any projects that pose a risk for settlement related damage to adjacent buildings should involve an engineering professional to design an excavation support system.

In urban settings, buildings are sometimes constructed on small footprints given the limitation of land. Oftentimes, older buildings share common walls. As an example, the gold building in the photo below is a separate property from the blue and green buildings, but the floor and roof framing shares party walls on either side which also share the same foundations. 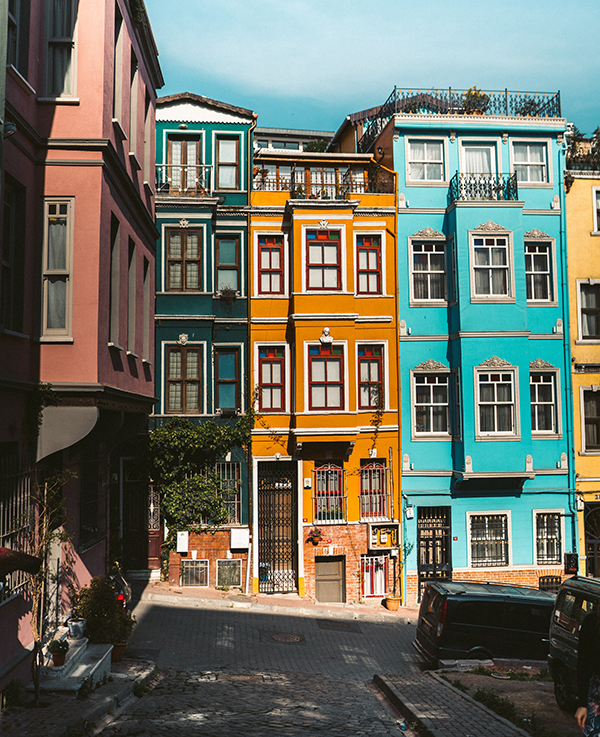 If the center gold building was hypothetically removed as part of an urban development project, it would not be uncommon for the foundation for the new building to have a greater depth than the original. If the new building’s foundation was excavated to the required depth as shown in Diagram 1, the underlying soils of the existing adjacent building may shift. The unsupported foundation could result in damage from partial or full collapse. 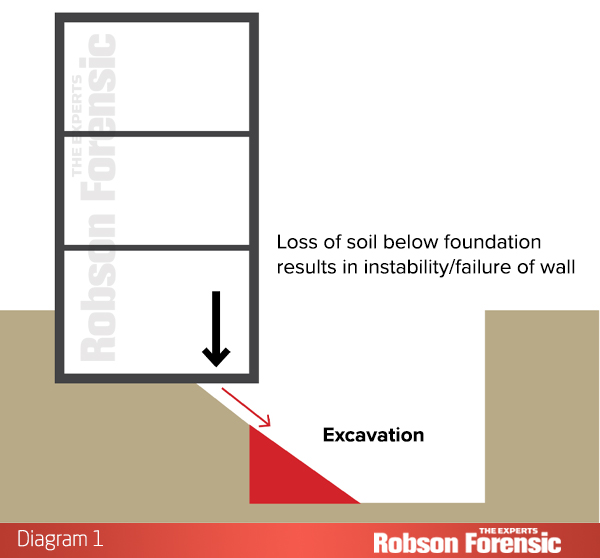 Some degree of settlement is expected over time with most buildings, but absent of disruption from natural or unnatural occurrences, typically, soils will stabilize.

Supported by surrounding soils in all directions, most types of soils are reasonably stable. As shown in Diagram 2, buildings are stable when the restraining soils are undisturbed.

Soils settle when the adjacent soils providing lateral restraint are removed or disturbed. Building failures (local or global failures) often occur when the lateral restraint afforded to soils supporting a foundation are disturbed. The soils will slump to their natural angle of repose as shown in Diagram 1. The slumping of soil under the footing causing a foundation to settle is known as undermining. 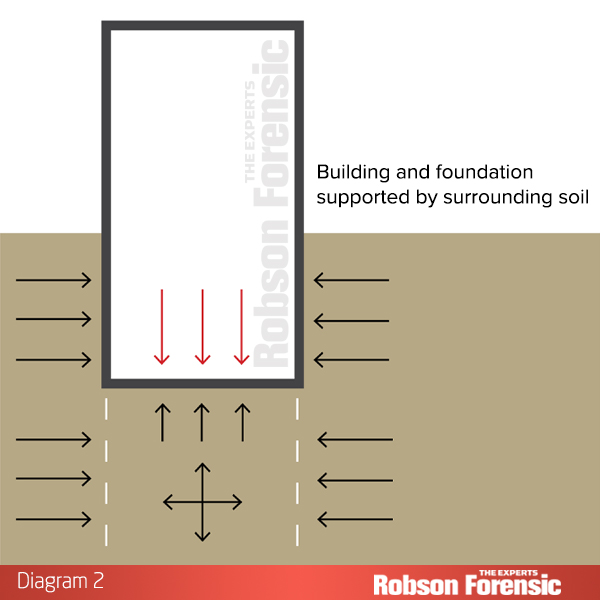 When soils settle and foundations are undermined, the entire building can be affected. Floors can shift out of level, windows and doors may rack causing difficulty in operating them, and cracks can propagate on walls starting from the foundation extending up to the roof line. Floors could also separate away from bearing walls resulting in serious damage. If the settlement is severe enough, a building could catastrophically collapse.

The Prevention of Excavation Related Undermining

Since all structures will settle to some extent when underlying soils are disturbed, the excavation must be carefully engineered, pre-planned, and monitored before and during the work.

Soils below a building must be laterally restrained by added engineered measures if the adjacent restraining soils are going to be removed through excavation. In addition to only restraining the load of the soils under a building, the restraint provided by the engineered measures must also support the surcharge (added weight) created from the weight of the building. To safely retain the soil and building surcharge, a shoring system for an excavation must be engineered, properly implemented and properly monitored.

The shoring system is an engineered system that temporarily replaces the existing, natural lateral restraint provided by adjacent soils that are removed during the excavation process. The shoring system must be properly sequenced and installed prior to the natural soil restraint being removed. Typical examples of shoring are underpinning and/or retaining earth of the existing foundation.

Underpinning is a method of using piles or concrete to support a structure by extending the existing building’s foundation downward to an elevation below the bottom of the adjacent excavation, as shown in Diagram 3. Retaining earth prevents the soils from finding their natural angle of repose. The retaining system should support both the lateral earth pressure and the surcharge weight of the building, as shown in Diagram 4. 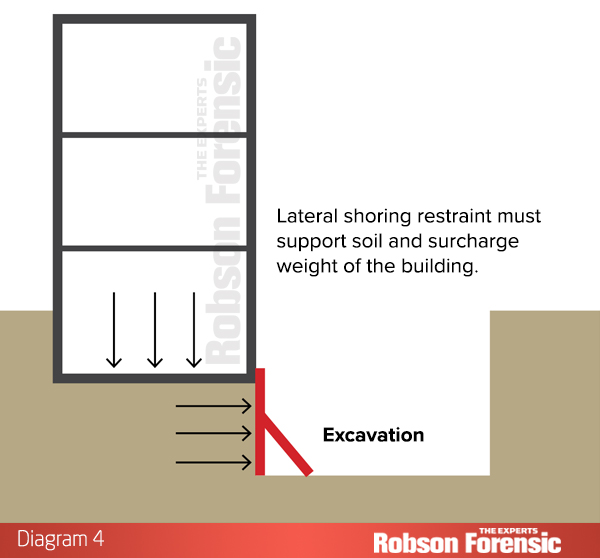 Causes of Damage to Adjacent Structures

Soils are expected to shift and settle if lateral restraint is removed or disturbed. The affect of settlement upon a given building or structure may vary; certain buildings are more susceptible and sensitive to settlement given their construction, type, and age.

Controlling the anticipated shifting of soils by proper engineering and planning, in addition to properly monitoring the building and the shoring for movement should reasonably control potential settlement, undermining, and resultant building damage. Field conditions or engineering oversights in excavation projects which can lead to building damage include:

As a precaution, contractors should perform a pre-construction survey that includes taking ample photographs and measurements, creating sketches, and thoroughly documenting all pre-existing conditions in the adjacent buildings prior to excavation. In some cases, the design professional of record will incorporate pre-construction surveys and building monitoring as part of the contract documents. All of these documents can be helpful in the forensic investigation and should be requested as part of the discovery process.

Forensic structural engineers are uniquely qualified to investigate excavation failures due to their intimate knowledge of how shoring is designed, constructed, maintained and how they are intended to safely perform. The experts in the Structural Engineering practice group at Robson Forensic are experienced in investigating incidents of excavation failures and collapse.

Failed structure investigations take many forms: from conventional examples such as buildings and bridges to the less obvious such as traffic signs, tents, trees, and chairs. From a lay perspective,…

Un-level floors, inoperable windows/doors, and various misalignment issues of cladding and partitions in high-rise buildings are sometimes the result of a phenomenon known as differential column…