Cellular towers require frequent service calls to repair, upgrade, or install new communications equipment. They are also subject to routine inspection related to the structural integrity of the tower and associated climbing facilities. In this article, Structural Engineer Anthony Volonnino looks through the lens of a specific fall incident to discuss some of the standards and safety features intended to protect communications workers when working at heights. 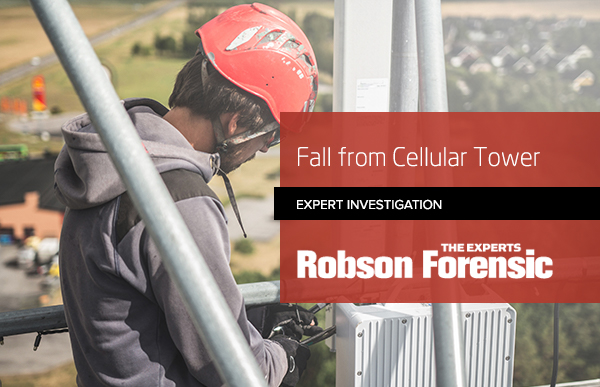 In the summer of 2013, a tower climbing crew arrived on site to perform installation of new communication equipment on a concealed cellular tower. Designed to discreetly blend in with the surrounding environment, concealed towers take many visual forms depending on their location, but function no differently than monopole or latticed mast towers. The tower in this incident was more than 50 feet tall and was constructed to outwardly appear as a three pole church bell tower. The incident tower included a fixed ladder with detachable ladder rungs and no safety climb device.

On the morning of the incident the first tower climber successfully ascended the tower utilizing a safety harness while double hooking to the tower climb rungs. The plaintiff, who had never previously been to this site, ascended the tower next. He was using his safety harness and, in the absence of a permanent safety climb device, was also double hooking with his pelican hooks to the rungs on the tower similar to the first climber. Before transitioning from the tower climb to the platform, the plaintiff fell to the ground from a height of approximately 50 feet, sustaining serious injuries.

After his fall, a steel detachable rung from the tower climb was discovered near the injured victim at the base of the tower; the rung was not present on the ground at the time the climbers began their ascent.

Investigation revealed that the workers were attaching their pelican hooks to detachable rungs, and that no safety climb device was available to be used as a secondary required fall protection. The victim’s fall and associated injuries were caused by the rung’s untimely detachment and lack of safety climb device. This anchorage arrangement did not meet the relevant TIA safety requirements for cellular towers or OSHA standards since the rungs were not welded or permanently affixed to the tube inserts that were welded to the structure. 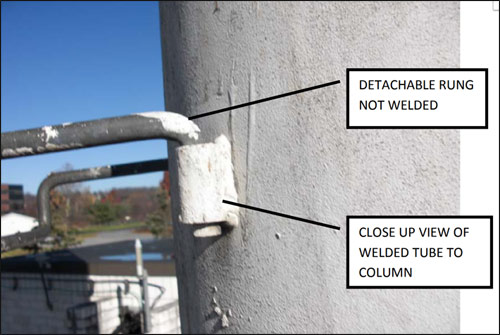 By visual observation, it was impossible to determine which rungs were loose and easily detachable versus ones that were snug and difficult to remove. No warnings of this concealed climbing hazard were posted.

ANSI/TIA-222-G Structural Standard for Antenna Supporting Structures and Antennas - provides the industry standard for the structural design and fabrication of new, and modification of existing, structural antennas, antenna-supporting structures, mounts, structural components such as the tower climb facility, guy assemblies, insulators and foundations. Any installation of new cellular equipment constructed on an existing tower structure requires a complete inspection, confirmation of all materials and sizes, and a thorough structural analysis for their associated loads imposed on the existing tower structure.

Findings from our expert witness investigation

Following a thorough forensic investigation, our experts concluded that the tower failed to meet industry standards and was unsafe due to its detachable ladder rungs and its lack of a safety climb device.

The hazard of the loose rungs and lack of safety climb device was known and had been previously reported by an independent inspection agency hired by the owner. The owner of the tower knowingly failed to ensure the safety of the tower climbers and violated applicable minimum safety standards for a cellular tower owner, rendering the tower unsafe for ascent or descent.

The owner’s in-house field technicians who routinely inspected the tower also failed in their duties to properly inspect or report the cellular tower deficiencies, given their inspection maintenance procedures. Consequentially, the owner’s actions were improper and violated applicable standards in failing to permanently attach the ladder rungs to the tower and/or provide a safety climb device.

The findings of our structural engineer were critical in the positive outcome of this case for our client. The defendants agreed to a $30 million settlement. Additional information on the settlement is available through wirelessestimator.com.

Contact the author of this article or submit an inquiry to determine which of our experts is best suited to investigate the technical issues specific to your case.