The root cause analysis in many structural failure investigations leads directly to a failed connection, and ultimately to a failed fastener. The failure of a connection often leaves a structure vulnerable to global failure or collapse due to load path discontinuities, rendering the structure unstable and incapable of withstanding the intended loads or forces or even supporting its own weight safely. In many cases, the root cause for the failure is that an improper fastener was used.

In this article, structural engineer Mark Duckett focuses on the standard of care for fastener selection as it relates to structural failures. In doing so, he will introduce critical technical concepts including types of loads, material characteristics (fastener and base material), and application-specific choices regarding fasteners. 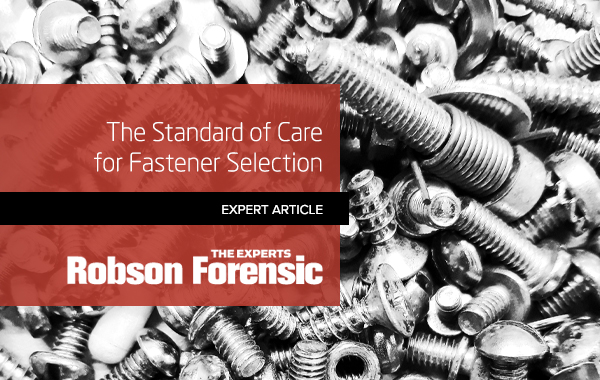 The Standard of Care for Fastener Selection - Expert Article

In cases involving the collapse of an ADA compliant shower seat or grab bar, collapse typically occurs due to a failed connection between the ADA fixture and the wall to which they are mounted. Fasteners used to connect those fixtures to the interior gypsum drywall walls can be subjected to relatively high shear and tension forces, as those fixtures are required to safely resist, in any direction, a concentrated minimum load of 250 pounds.

The typical root cause in these cases is the utilization of an improper fastener type to connect the fixture to the wall. Even when mounting through tile, the fastener might only be anchored to the gypsum drywall and not to a wood member behind the drywall. While there are some specialized drywall anchors that may safely support an ADA fixture (butterfly/toggle anchors, sleeved anchors, and some threaded anchor inserts), the capacity of these fasteners degrades significantly when the drywall becomes wet or moist and can fail suddenly without warning. The best practice when mounting ADA fixtures is to ensure there is wood backing (that is, itself, properly affixed to adjacent vertical wall studs) behind the drywall into which proper fasteners can be installed to safely support the fixture.

Corrosion is another failure mode for fasteners used to mount ADA fixtures. While corrosion-resistant fasteners might be utilized, if the finish or base material of the fastener is different from the mount finish or base material, accelerated corrosion will occur. This is a phenomenon known as galvanic action. For example: if the mount for an ADA fixture is stainless steel, using hot-dipped galvanized or aluminum fasteners, coupled with the presence of water, will create a galvanic cell and will accelerate the corrosion of the fastener or the mount itself.

It is important that fasteners are selected with consideration of the specific materials to be joined. As an example, lag screws are large diameter wood screws that are intended to be used on dimensional lumber (i.e. 2x4, 2x6, etc. wood members) and when used in conjunction with that type of lumber, they can achieve large tension and shear capacities, and create strong connections. However, lag screws have no published capacities when installed into engineered wood panels (i.e. OSB boards and plywood) and are an improper fastener to be used with that type of wood member.

In a particular case involving a guardrail failure, the base plates were affixed to OSB flooring by lag screws. Regrettably, the guardrail system failed when interacted with at forces well below the minimum requirements. The lag screws were incompatible with the OSB board and simply tore out of the supporting material.

In other cases, we have seen wood screws pull free from engineered wood composites, such as Medium Density Fiberboard (MDF). In one such case, a pull-down attic ladder was designed such that the MDF ceiling “cover” was integral to the structure of the ladder assembly, rather than being purely cosmetic.

The fasteners used by the manufacturer to connect the ladder to the MDF cover were shallow threaded wood fasteners that did not penetrate the full thickness of the cover. The shallow threaded fasteners were incapable of transferring the necessary loads from the ladder to the cover and the system failed when under load. The ladder system collapsed, and the homeowner was injured. The proper fastener selection in that instance would have been a through-member fastener, such as a bolt with washer and nut or carriage bolt and nut.

When investigating a case involving a failed fastener, it is important to consider the following:

Forensic structural engineers are uniquely qualified to investigate the failures of structures and their individual components due to their intimate knowledge of how structures are designed, constructed, maintained AND how they are intended to safely perform. The experts in the Structural Engineering practice at Robson Forensic are experienced in investigating incidents of structural failure and collapse.

Submit an inquiry or contact the author of this article for more information.

Materials science experts are often called upon to investigate fastener failures across a multitude of applications, from everyday consumer products to highly sophisticated industrial machinery. In…

In this article, Structural Engineer, Mark Duckett, P.E., S.I., discusses the topic of construction guardrail failures. Through video, he introduces a properly designed and constructed guardrail, and…