In this article, forensic document examiner, Mark Songer discusses the role of document analysis in elder care disputes. He provides relevant data on the scope of the problem and outlines his involvement in two such cases. 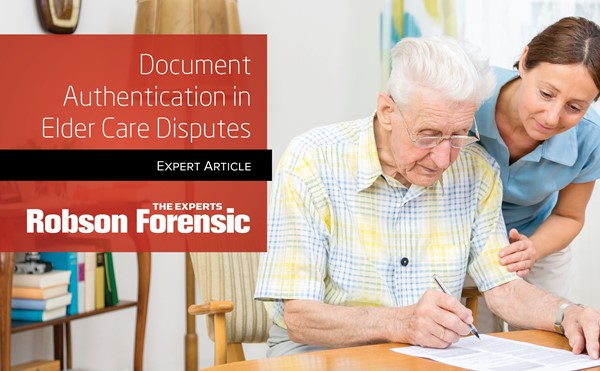 The Centers for Disease Control and Prevention defines elder abuse as an intentional act, or failure to act, by a caregiver or another person in a relationship involving an expectation of trust that causes or creates a risk of harm to an older adult. (An older adult is defined as someone age 60 or older.)

Elder abuse is an umbrella term that may include physical, sexual, or emotional abuse; financial exploitation; and neglect, abandonment or self-neglect. While all of these issues are of vital concern to our aging population and the nation’s welfare as a whole, this article will specifically focus on the financial abuse and exploitation of the elderly and how document examiners are sometimes called to assist in such cases.

A 2004 study conducted by the National Center of Elder Abuse outlined the following statistics:

National Trends- Abuse of Vulnerable Adults of All Ages

Even in the digital era, incidents of financial exploitation frequently leave a physical paper trail of signatures, checks, and other documents. In the section below we outline two incidents in which forensic document examiners were able to use existing samples as part of their analysis to determine the authenticity of questioned documents.

Eighty-five year old Frederick recently lost his wife of 60 years and now lives with his son Chris. Chris has two other siblings that live in other states. Chris convinces his father that he will “take care of things” but needs access to his banking and credit card information. Chris takes this opportunity to open several credit cards under his father’s social security number as well as writing checks from his father’s accounts to himself. The scheme continues until Frederick passes away and the other siblings become aware that Chris has looted the estate. The siblings suspect multiple forgeries on accounts and contact a forensic document examiner to examine and determine if Chris had indeed forged his father’s writings.

A comparison of Frederick’s known signatures to multiple forged checks and credit card applications reveals the signatures as having been simulated. A simulation is an imitation of a genuine signature. A successful simulation is often difficult for the forger as they must disregard all the writing characteristics of his or her writing and adopt an entirely new set of writing characteristics of another writer. This task is extremely difficult as writing is a complex motor skill consisting of sensory, neurological and physiological impulses. Through practice and repetition, writers interject their own individual characteristics into their writings which become a pattern of habitual formations that are repeated from one writing to the next.

It’s 1975 and 60 year old Rita has suffered a major stroke leaving her incapacitated and under the care of her daughter Mary. Mary takes this opportunity to start scheming a plan to inherit her mother’s entire estate worth millions, leaving her twin sister Heidi with nothing. Mary opens accounts and starts signing her mother’s signature on various business and non-business documents. It’s now 2005 and Rita has just passed away.

At the reading of the Will, Heidi is shocked to learn that she only receives a small inheritance, leaving the majority of the estate to Mary. Heidi is furious and requests a copy of the Will and quickly questions the validity of her mother’s signature. Mary insists its legitimacy and volunteers to provide signature samples from her mother going back 20 years. Heidi contacts a document examiner to compare the signature on the Will with several exemplars provided by Mary.

Unbeknownst to Mary, Heidi also requests her late mothers government employment files as comparison materials. Rita served in the military during WWII and was a records clerk for several years. The document examiner was able to quickly determine that the writings provided by the government and those provided by Mary were from two different writers. The examiner also identified Mary as having forged her mother’s signature on the Will. In this case, it was imperative that adequate and timely samples were provided for a thorough analysis.

Forensic examination of writing is commonplace in elder abuse cases and is frequently requested by family members, law enforcement and attorneys when the validity and or authenticity of writings is questioned. The examiner is always faced with uniqueness to each case and considers all factors of identifying writing such as slant, alignment, size, fluency, skill level and variation. However, when dealing with infirmaries attributable to aging or affliction of mental illness, disease or other debilitating conditions, the examiner must take into consideration deterioration of the writings and in some cases, assisted or guided hand writings. This presents a very difficult challenge for the examiner as the amount of assistance often comes into question. These types of examinations require a sufficient quantity of comparable exemplars that predate the illness and predate the involvement of the person giving assistance.

Overall, the forensic document examiner can typically assist in questioned document cases involving the intentional and deliberate exploitation of our elderly population. If you feel you may have a potential case, please contact the author of this article or submit an inquiry.