When pipes freeze and burst releasing water, the mechanical engineers at Robson Forensic are frequently retained to determine the cause of the failure. This article provides a starting point for frozen and burst pipe investigations. 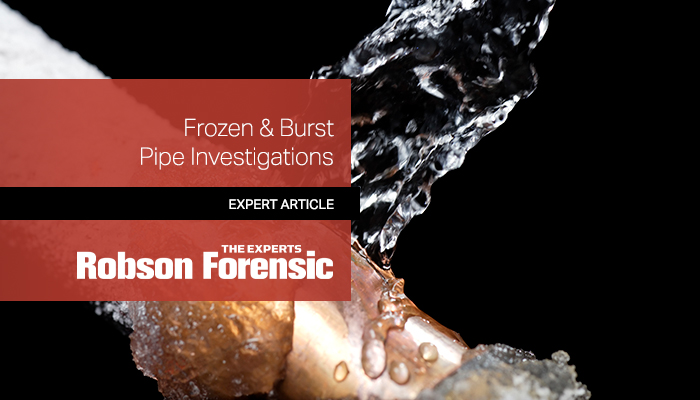 The water in pipes can freeze when they are exposed to temperatures below 32°F for an extended period of time. Frozen pipes occur for two basic reasons:

Domestic water piping, HVAC heating and cooling piping, irrigation piping, and fire protection piping are all susceptible to damage from freezing. Both plastic and metal pipes can burst when they freeze. Dependent on pipe size and system pressure, a small crack in a burst pipe can spew hundreds or even thousands of gallons of water in a day, causing flooding and property damage, and the potential for mold.

In the course of these investigations, there are common questions that need to be addressed involving system design, installation, maintenance, and operation.

When a pipe bursts, the break does not necessarily occur at the exact spot where the ice blockage is located. Ice expansion will exert pressure against the pipe wall but also pressurizes the water trapped between the ice and a closed valve or fixture. As the water continues to freeze and expand inside the pipe, it causes the trapped water to continue to increase in pressure. The increased water pressure may cause a pipe to burst or a sprinkler head to release in a location where there is no ice blockage. 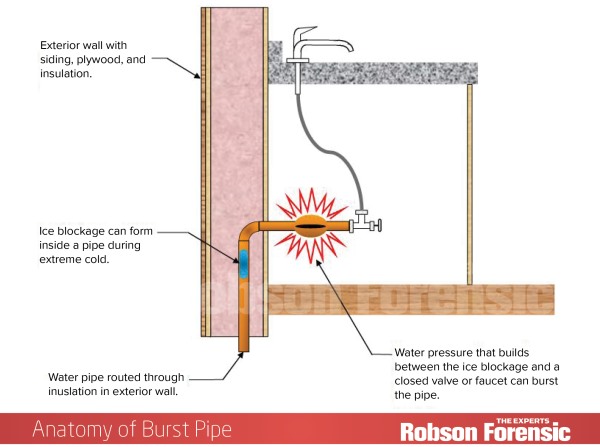 A few common locations where pipes freeze are: outdoor hose bibs, swimming pool supply lines, fire protection lines, and water supply pipes in unheated interior areas, including basements, crawlspaces, attics, garages, bathroom sink cabinets, and kitchen cabinets. Pipes that are along exterior walls that have little or no insulation, voids in the insulation or improperly installed building wrap are also subject to freezing.

The National Fire Protection Association (NFPA) requires that wet (water-filled) fire protection systems be designed, installed, and maintained at a temperature above 40°F to prevent the risk of freezing.

The International Plumbing Code (IPC) requires pipes to be protected from freezing:

“305.6 Freezing. Water, soil and waste pipes shall not be installed outside of a building, in attics or crawl spaces, concealed in outside walls, or in any other place subjected to freezing temperature unless adequate provision is made to protect such pipes from freezing by insulation or heat or both. Exterior water supply system piping shall be installed not less than 6 inches (152 mm) below the frost line and not less than 12 inches (305 mm) below grade.”

There are several preventive steps that building owners can take to prevent pipes from freezing, including the following:

Before the cold weather sets in:

When cold weather is expected:

If away from home for an extended period of time:

Insurance companies may deny claims resulting from frozen pipes if:

Building systems refers to the mechanical (HVAC), electrical, and plumbing systems found in modern buildings. Our experts are frequently engaged in cases involving design and installation errors, product malfunctions, as well as maintenance and operations issues.

Ron is a Mechanical Engineer with over 30 years experience in the design, construction, startup, control, and commissioning of mechanical, fire protection, plumbing and process systems. Ron held… read more.

In this case, a security guard was badly scalded by hot water from an outdoor hose bibb. Robson Forensic was retained to explain the biomechanics of scalds and opine on the victim's ability to…

In this article, mechanical engineer, Daryl Smith, P.E., provides an introduction to hot water scalds, including information on the temperatures at which scalding injuries occur as well as the safety…

When fire sprinkler systems activate and/or release water we are frequently retained to determine if the systems worked as intended. In the course of these investigations there are common questions…