This case involves a woman who visited a haunted house in the weeks leading up to Halloween. While ascending a dark unlit stairway within the attraction, an actor dressed as a monster unexpectedly jumped-out onto the landing, startling the plaintiff and causing her to lose her balance and fall backwards down the stair.

Architect and Premises Safety Expert, Mark Williams, AIA, NCARB was retained to investigate the incident and determine if dangerous conditions caused the incident to occur. 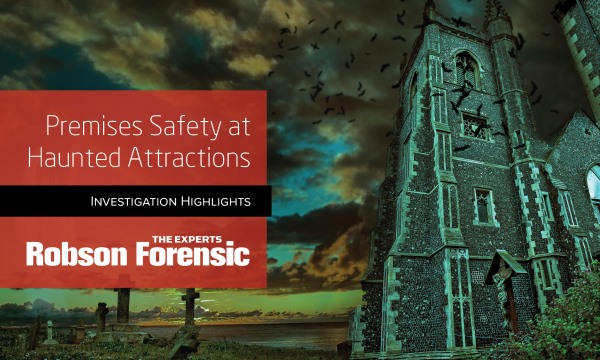 The haunted house in this case was one component of a seasonal attraction, created and run by the owner of a small farm complex. The amusement attraction consisted of a maze cut through a two-acre cornfield and a two-story haunted barn. The Haunted Cornfield & Barn was open to the public during the month of October for seven dollars admission. After purchasing their tickets and waiting in line, patrons were directed to a single point of entry, which accessed a dark path leading to the bottom of a stair. The path of travel required patrons to pass through a suspended curtain and ascend a dark unlit stair attached to the exterior wall of the barn structure. The incident stair was a straight run beginning at grade with at least 18 risers until it reached an exterior landing at the second floor. Construction was from nominal 2-inch dimensional grade lumber with closed risers. The stair was enclosed with wood boards resulting in a “dark tunnel” effect as viewed by patrons entering from below. There was no handrail on either side of the stair. There were no lighting fixtures installed in the stair. There were no exit signs or emergency lighting inside the building leading out to the stair. There was no emergency lighting on the stair. Available illumination at the incident stair was limited to multi-colored Christmas tree lights suspended along the wall near the ceiling.

After waiting in line for about an hour, the plaintiff’s group proceeded in single file to the bottom of the stair. The plaintiff and her sister were leading their group and proceeded up the stair ahead of the remaining three. The plaintiff testified that as she and her sister ascended it was necessary that they “felt their way up the wall because there was nothing to grab onto.” As they approached the top of the stair a character, dressed as a monster, unexpectedly jumped out onto the landing. This startled the plaintiff, causing her to suddenly lose her balance and fall backwards down the stair.

The dangerous conditions that caused the plaintiff’s fall and injury include the failure to provide a handrail, the failure to provide adequate lighting, and the active distraction caused by the amusement character. The mood control put in place by the owners and operators increased the impact of being startled and scared. More importantly, the lack of adequate lighting for safety impaired the plaintiff’s ability to maintain orientation and balance. As a result, the plaintiff was more susceptible to a loss of balance if disturbed or startled. In fact, she was purposefully distracted by the amusement character while ascending the stair and was more likely to fall. The plaintiff had no opportunity to regain her balance because there was no handrail. The lack of handrails and adequate lighting violated applicable standards for safe stair design and construction and made the stair dangerous in a manner that caused the plaintiff’s fall.

History of Disasters at Haunted Attractions

Code provisions for special amusement buildings are based on a 1988 Board for the Coordination of the Model Codes (BCMC) report as a result of the 1984 fire in the “Haunted Castle” at the Six Flags Great Adventure Park in New Jersey, where eight patrons were unable to exit the building and died. The hazard associated with such buildings is not related to the permanence or length of use. The commentary to the 1993 Building Officials Code Administrators International (BOCA) code identifies that seasonal uses such as haunted houses are included.

For more information on this case and to discuss the standards relevant to haunted attractions, please contact Architect, Mark Williams.

The Premises Safety Experts at Robson Forensic investigate cases involving the design, construction, operation, and maintenance of residential, institutional, and commercial premises. We conduct site inspections, perform tests, and review applicable standards to learn facts and form opinions about how and why individuals were injured within the built environment. For more information submit an inquiry or contact the author of this article.

This article addresses some of the relevant standards and safety features used to improve the safety of short flight stairs and single step transitions. Short Flight Stairs & Single Step…

In this article, the premises safety experts at Robson Forensic provide an introduction to the International Building Code stairway design requirements for new buildings. Particular attention is paid…

In this article, biomedical engineer, Valentina Ngai discusses the process by which it is possible to reconstruct an incident by examining injury data. In this instance, Dr. Ngai was tasked with…