In this short article, Civil Engineer, Brent Leisenring, P.E., retells the details of a heavy rigging project that he was responsible for managing prior to joining Robson Forensic. Brent now applies his industry expertise to a variety of civil engineering matters, including casework involving heavy rigging operations. 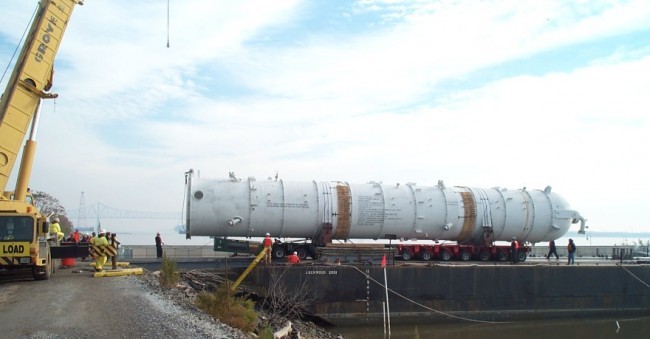 Brent engineered and managed a complex heavy rigging operation in which a 120 foot long, 600,000 pound reactor vessel had to be moved from a barge, two miles into and through an operating oil refinery, picked up and rotated into a vertical position and set, within 1/8 of an inch accuracy, onto 12 anchor bolts on a concrete foundation pad-without the use of a crane to handle the vessel in the refinery.

This operation was performed utilizing a variety of rigging tools including a deck barge for transporting the vessel from the overseas ship to a specially created docking location at the refinery shoreline; a 13-line Self Propelled Modular Transporter (SPMT) for moving the vessel off of the barge and through the refinery (on 104 tires); a 300-ton hydraulic gantry for repositioning the vessel on the SPMT at the erection site; a custom engineered self-tailing device for tailing the vessel on the SPMT during its rotation to a vertical position; a custom engineered Modular Lift Tower (MLT) with a 500-ton hoist and hydraulic slide system for lifting, rotating, moving into position, and lowering the vessel into final setting location.

Two support cranes and two bulldozers were also utilized in preparing the site, erecting and dismantling the MLT. In addition to the barge docking site, a temporary railroad crossing was also constructed and dismantled to accommodate the SPMT. This is just one example of the numerous customized rigging solutions that Brent helped to develop during his time with Elgood Mayo Co. and Barnhart Crane and Rigging. 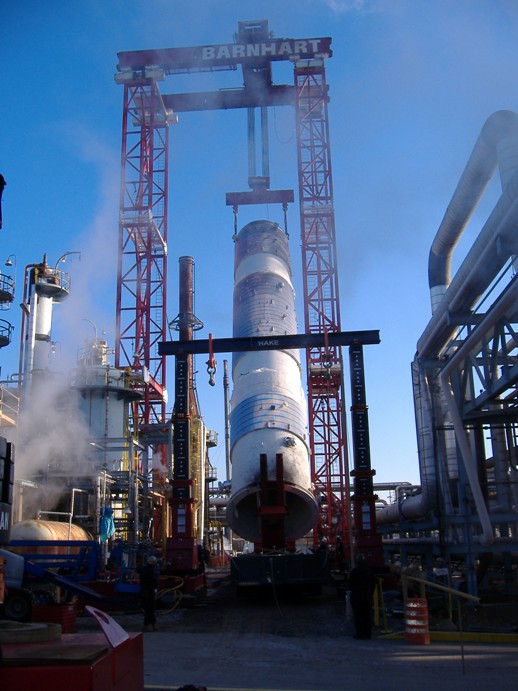 In this document we highlight some of the most common causes of deck failures and steps that can be taken to safeguard against such failures. Residential Deck Failures Based on data from the Consumer…

While most people have used ladders, few people are familiar with the proper terminology to describe the components of a ladder; for this reason, the experts at Robson Forensic have created this…