Un-level floors, inoperable windows/doors, and various misalignment issues of cladding and partitions in high-rise buildings are sometimes the result of a phenomenon known as differential column shortening. This article provides an introduction to this topic and discusses the standard of care for structural engineers of record relative to this issue. 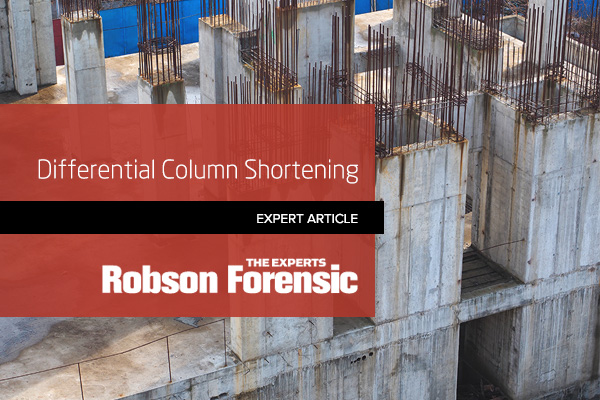 A reasonable and responsible Structural Engineer is judicious about not only the strength or structural integrity (i.e. structural safety) of a structural frame, but the applicable standard of care also requires the structural engineer to be focused on the serviceability of the structure as well. The American Society of Civil Engineers (ASCE) defines serviceability as “a state in which the function of a building, its appearance, maintainability, durability, and comfort of its occupants are preserved under normal usage.” In general, serviceability issues involve the response of people and objects to the behavior of the structure under load. For example, the occupants may feel uncomfortable if there are unacceptable deflections, drifts, or vibrations. Serviceability limits are typically not codified.

What Is Differential Column Shortening?

Differential column shortening is most prevalent in high-rise buildings where the columns are constructed of cast-in-place concrete but it can also occur in buildings with steel columns. This article will focus on concrete construction only. Concrete is widely utilized in high-rise construction because of its sustainability, ease of form shaping, cost, durability and energy efficiency.

All concrete columns and walls will shorten or “compress” under vertical load; the greater the load, the more a concrete column will axially shorten or compress. The two physical parameters with the greatest effect on this phenomenon are the magnitude of the vertical load and the size (cross-sectional area) of the column or wall member. In concrete buildings, the elevator walls and stair wells are frequently used as concrete shear walls to resist lateral loads such as wind or seismic. As a result, shear walls have a very large cross-sectional area while typically carrying the same or less vertical loads as compared to individual column members. 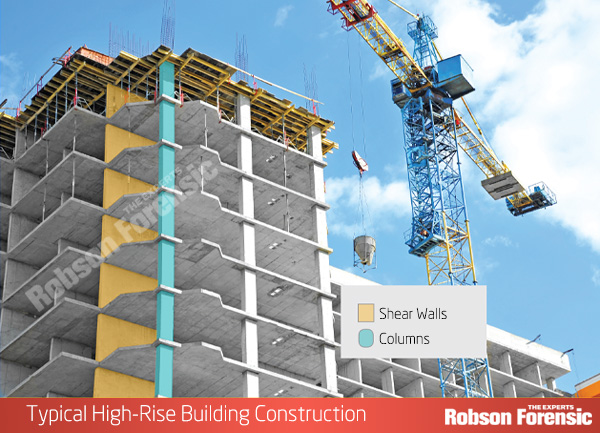 While column/wall shortening, in and of itself, might not represent a problem (i.e., if all of the columns and walls shorten the same amount), differential shortening typically does present problems. Because shear walls will shorten less than the individual columns, the concrete floors attached to/supported by those different members will slope/tilt/rotate in unintended ways. This issue is exacerbated when an individual column is located relatively close to a shear wall. Due to the cumulative load effect as the structure is constructed, the columns and shear walls on the lower levels will shorten to a greater degree than their counterparts on higher levels. Further complicating matters, columns on the same story and of the same size can have different axial loads, thus experiencing even more differential shortening.

Why Is Differential Column Shortening a Problem in High Rise Buildings?

Differential shortening in a high-rise building can create constructability challenges and result in serviceability problems if not properly addressed before and during construction. Column shortening may seem minute in scale when viewed on a floor-by-floor basis, but a column that may only elastically shorten 1/16th of an inch per floor can have a cumulative effect of 3 ¾” over 60 stories. This is exclusive of creep and shrinkage effects; other phenomena that affect axial shortening.

Differential column shortening can lead to the unintended sloping/tilting/rotating of the building’s concrete floors, which can subsequently result in unintended stresses and misalignment of the interfacing building systems, partitions, and cladding.

The cumulative effect of differential column shortening in a multi-story building can result in costly defects to:

Remediation of these defects can require costly change orders, significant project delays, substantial retrofits, and repair to damaged components. Extreme examples can result in structural overstress not considered in the original design.

Mechanical, plumbing, electrical, curtain wall and interior finish work follows the construction of the structural floor slabs, columns, and shear walls in sequence. If the effects of elastic shortening, creep, and shrinkage are not properly accounted for, the various trades could come back months later and find that the once level floor has shifted out of level in some cases as much as 2 to 4 inches, introducing multiple constructability issues and delays. 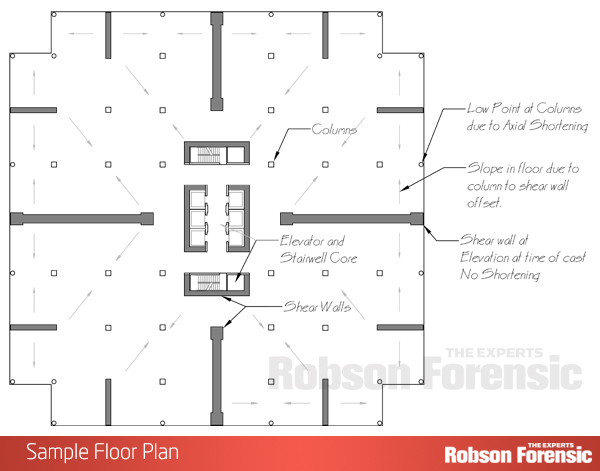 After the foundation is constructed, vertical elements such as columns and shear walls are cast first. The floor slab is then constructed above the shear walls and columns. Shoring (formwork) is used to temporarily support the floor during the placement and initial hardening of the concrete. Competent contractors ensure every floor is level at the time it is cast. After the casting and initial hardening of the concrete floor, the shoring is stripped and re-shores are installed under the newly cast floor (until the concrete reaches its requisite strength). The re-shores are placed to transfer the construction loads to the slabs below. In many cases, the re-shores can remain in place for 7 to 10 floors depending on the construction schedule. With high early strength concrete and a highly skilled contractor, a new floor can be constructed every 2 to 4 days.

What Is the Standard of Care for Structural Engineers?

Addressing the effects of differential column shortening presents a challenging responsibility that all competent and prudent structural engineers should address in the design of high rise structures. Unless the effects of creep, shrinkage, and differential column shortening are explicitly incorporated in the structural analysis, the high rise building has not been reasonably evaluated for serviceability.

Finite element software programs are used to develop building models that analyze and calculate building member forces and stresses for the structural engineer to utilize. The same, or similar software can also be used to predict the differential shortening considering, axial deformation, creep, shrinkage and be used as a tool to plan the construction sequencing. A structural engineer should never guess or use a “rule of thumb” for the anticipated differential shortening since no building will respond exactly the same.

The Structural Engineers at Robson Forensic are frequently tasked with identifying the causes of structural failure in cases involving professional liability, construction defect claims, and personal injury. Structural cases often require an expert with focused expertise, and our licensed professional structural engineers have decades of experience in residential, industrial, institutional, municipal and commercial structures, including roadway and railroad bridges.

To discuss your case with an expert, contact the author of this article or submit an inquiry.

In this article we revisit a case in which a building owner claimed that damage to his building was caused by vibrations associated with a construction project on an adjacent property. Damage to…