This article addresses common safety issues related to horses and equestrian activities like horse shows, riding lessons, trail rides, and pony rides. We discuss a number of horse safety issues that frequently result in injuries to riders, spectators, and the general public. For each scenario we provide an explanation of the hazard with guidance on how exposure to these hazards should be prevented by following the applicable standard of care for equestrian activities and equine facilities. 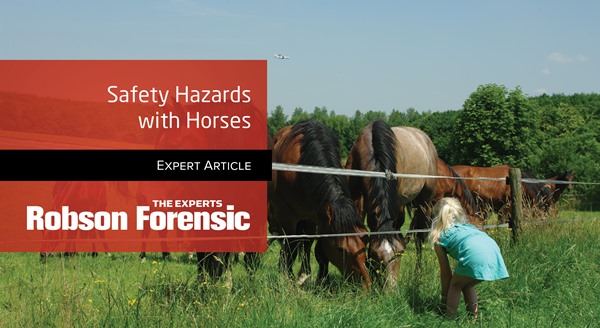 There are many potential hazards at horse shows, equine events, and at equine facilities which can be causative factors in personal injuries, as well as possibly being harmful to the horses. While it is impossible to illustrate every scenario, the following are examples of the most common hazards we have observed.

Proximity of spectators/participants to horses - Participants can be defined as anyone who is physically engaged with the horse (e.g., leading, riding, handling), while spectators are people who are not physically engaged with the horse. Spectators who have little to no knowledge of equine behavior may enter the “horse area,” unknowingly putting themselves at risk for injury. Facilities should be constructed and managed in such a way to separate spectators from participants. For example, at a horse show where competition rings are separated by a walkway, the width should be adequate to separate horse traffic from spectator traffic.

Moving around horses - No level of domestication and training of horses will ever remove their basic survival instinct, which is referred to as “fight or flight.” In approaching horses, it is important to understand that they should always be approached from the side. Horses have two blind spots: one directly in front of them, and one directly behind, and approaching from those areas must be avoided. A horse is a perceptive creature that is constantly scanning his environment for perceived threats, and an approach from one of these blind spots is likely to startle the animal.

Leading Horses - When leading a horse, it is important to keep the horse relatively close. The most common position is for the handler to be on the horse’s left side, shoulders even with the horse’s throat latch. It is suggested that handlers work with leading horses from both sides, as the need for leading from the right side will most likely be important at some point. If a horse becomes frightened, the handler should always pull the horse’s head TOWARD their body until the horse is calmed and restrained. This is the best method to ensure the handler’s safety, as pulling the head toward themselves sends the hindquarters of the horse away, thus protecting them from kick injuries.

The most common mistake seen in leading horses is the handler out in front of the horse, holding the end of the lead rope and not paying attention to where the horse is and how they are acting. In that scenario, if the horse becomes frightened, the handler could be run over by the horse, or the horse could kick the handler while running by. It is important to be in the proper and safe position whenever leading horses. 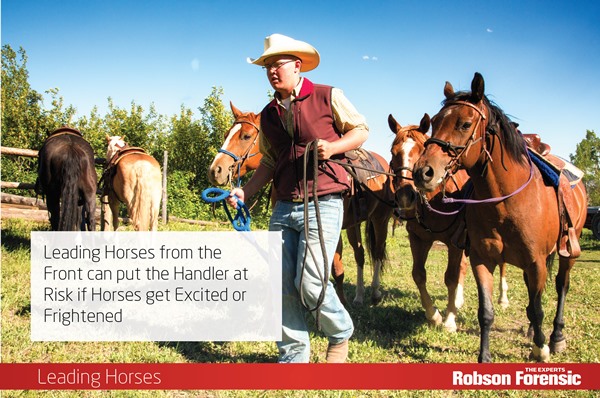 Mounting and Dismounting – Many injuries result from horses running away while the rider is attempting to mount or dismount. The rider should be sure to have light contact with the horse’s mouth before attempting to mount or dismount, so that the horse can be corrected easily and quickly if necessary. With horses that are strong, non-cooperative, or difficult to mount, the horse’s head should be pulled toward the rider to keep control when mounting or dismounting, or for pressure to be added to the outside rein to prevent it from moving away from the rider.

Despite how movies make it look, mounting or dismounting while a horse is in motion is dangerous and can have disastrous consequences. A worst case scenario would be if the rider gets a foot stuck in the stirrup, falls, and is dragged by the horse. Because of this, care should be taken to ensure the stirrups fit the rider’s feet; if the rider’s foot goes through the stirrup, it should not be used, as the rider’s foot could get hung up.

Owners should always train their horses to stand still when mounting or dismounting, and stables that offer riding lessons or guided tours should be prepared to assist novice riders with mounting and dismounting, once an appropriate horse has been assigned to the rider.

Once the rider’s foot is in the stirrup, they should get on or off the horse as quickly and quietly as possible. Many riders are bucked off because they landed hard in the saddle. Only when both feet are securely in the stirrups should you attempt to ride off. When dismounting, the rider should take their foot out of the stirrup and get off as quickly and gently as practical.

Mismatch of horse with rider’s ability – Pairing a young, inexperienced, or green horse with an inexperienced rider is an accident waiting to happen. A commonly used rule of thumb in the industry is that a child’s age plus the horse’s age should be greater than 20. Horses and ponies used for novice riding lessons or pony rides are generally older animals that have been desensitized to external stimuli by years of experience in the show ring or lesson environment. The size of the horse does not matter in pairing a horse with a rider, but rather the temperament, training, and experience level of the horse is of utmost importance.

Lack of situational awareness when riding – It is important for riders to be aware of their surroundings as they ride, and avoid getting too close to other horses. Just as we have to be careful in approaching horses on the ground, the same principles apply when riding. Remember the horse’s basic instinct of “fight or flight”; in this instance, the horse is most likely to fight (strike or kick), as the control of its rider would hopefully be sufficient to prevent flight. When riding in groups, riders and event coordinators must be sure to keep at least two horses lengths between riders, and if there is a horse in the group that is a known kicker, that horse should be identified. The most common way to identify kickers is tying a red ribbon on their tail. 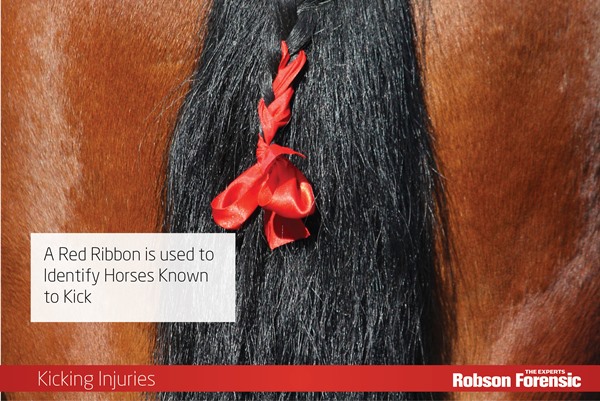 Riders must also be alert when riding alone. Horses can and will spook at almost anything, especially if they are a younger, inexperienced horse. When riding in the arena or on the trail, riders must be aware of stimuli such as other animals, vehicles, or other structures which might cause the horse to spook.

Tack: When in doubt, replace it – Just as tires wear out on cars, tack and equipment used in riding becomes faulty due to age, wear, and/or inadequate maintenance. Tack should be checked for evidence of weak spots or breaks prior to every ride. If there is any question as to the durability of stirrup leathers, cinches/girths, headstalls/bridles, or other tack, it should be replaced.

Environmental factors – As we’ve discussed, horses become accustomed to their environment and surroundings through desensitization to stimuli that they frequently encounter. For example, horses that are pastured next to a railroad initially may be uncomfortable as the train passes, but over time they will be desensitized through repetition, and will no longer be alarmed by the train.

Especially with young horses, a reaction of fear and anxiety upon leaving familiar surroundings is quite common. These “green” horses can often be seen at horse shows, spooking at the arena fence, other horses, or unfamiliar sounds. With repeated exposure to unfamiliar stimuli over time, the horses will adapt to these new surroundings.

Weather is also an important factor, as storms can precipitate the flight response in horses. Bursts of lightning and thunder will alarm even the most seasoned and well trained horses, and extra precautions should be taken when these events occur. In addition to checking local weather forecasts before any ride, group ride or event organizers should be aware of where trails intersect with vehicular, pedestrian, or any other traffic and prepare participants accordingly.

Robson Forensic provides specialized forensic experts to investigate injuries to humans as well as claims of neglect and abuse toward animals. Our experts can approach these investigations from the perspectives of horse trainers, facilities owners, nutritional specialists, and more.

Submit an inquiry or call 800.813.6736 to discuss your case and how Robson Forensic can assist.

This article discusses issues related to the contamination of animal feeds. Topics of discussion include the causes and consequences of contaminations, and how feed manufacturers should respond in…