In this 2016 update of an article from late 2015, the technical experts at Robson Forensic highlight the available information regarding hoverboard fire/explosion incidents. Our experts are frequently engaged to investigate battery fires in a range of consumer products, and at the time this article was first published, hoverboards represented a new and exciting product category. 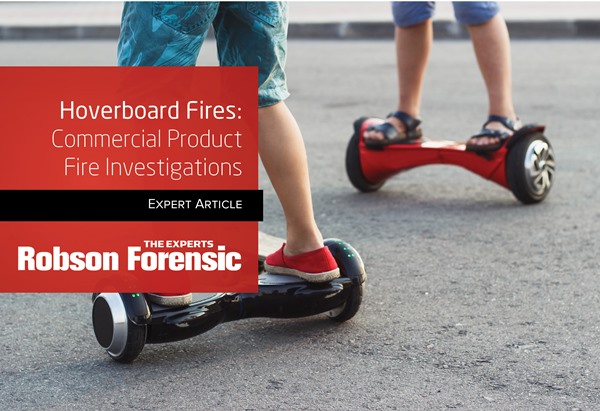 Published 9/2/16 Hoverboards were the hot topic last Holiday Season and a popular gift on many holiday lists; however a dangerous trend developed with these self balancing, two wheeled scooters being linked to fires.

A house fire in Louisiana occurred due to a hoverboard explosion. The board was charging in a bedroom when it exploded. The owner was in possession of the device for only a day before the fire occurred. The homeowner stated that sparks were seen coming from both wheels, “like fireworks”. A hoverboard burst into flames within a Washington State mall and was caught on video. The incident board was sitting unused, in proximity of another board that was being ridden at a mall kiosk, when it exploded. Nearby employees were able to put the fire out with an extinguisher. Another incident involved a young man riding the board in Florida when it burst into flames. He hadn’t even travelled 100 feet before the incident occurred. In Boca Raton, Florida, a lady reported that her 11-year old daughter was riding a hoverboard when she noticed her feet were getting hot. She hopped off and saw flames coming from the board.

In December of 2015, the National Fire Protection Association (NFPA) published a flyer on hoverboard safety. In January of 2016, the Consumer Product Safety Commission (CPSC) announced they were devoting necessary resources to determine the cause of the fires. The CPSC conducted tests on models that were reported to be involved in fires as well as new models. The outcome of their tests found that the lithium-ion battery packs can overheat, posing a risk of fire and explosion. The result of this finding was a massive recall of over ½ million hoverboards manufactured by a variety of companies and sold through various retail stores and on-line retailers. Underwriters Laboratories Inc. (UL) responded quickly to the need to establish requirements covering the electrical drive train system, including the battery, for hoverboards and published the first issue of UL 2272 – Outline of lnvestigation for Electrical Systems for Self-Balancing Scooters on January 29, 2016. UL followed up with a 2nd issue on April 22, 2016 with revisions to the overcharge test, crush test and partial immersion test.

Last December, U.S. Customs and Border Protection (CBP) seized nearly 1,400 hoverboards at New York’s JFK airport with counterfeit batteries. In January, CBP seized thousands more hoverboards containing counterfeit batteries, including over 16,000 in Chicago, over 300 in Miami, and 180 in Buffalo. Many of these hoverboards arrived from China and contained batteries with a fake trademark logo. Counterfeit batteries are a continuing concern for CBP with more recent seizures in Norfolk, VA, Washington-Dulles International Airport, International Falls, MN, and Miami, FL. CBP continues to work with the U.S. Department of Transportation, Pipeline and Hazardous Materials Safety Administration on the use of counterfeit and unauthorized batteries in hoverboards. If you are using a hoverboard or considering the purchase of one, be sure to check that is it UL listed and follow the manufacturer’s guidelines related to use and charging. Only perform charging in supervised conditions.

The fire investigators and electrical engineering experts at Robson Forensic are frequently retained to determine the origin and cause of fires in consumer and industrial products. Our experts evaluate the design, operation, use and instructions of products. We also perform testing to evaluate possible failure modes and if the fact patterns match the evidence. For more information visit our Fire & Explosion practice page.

Daryl is a licensed Professional Engineer. He was an Electrical Engineer for the two largest commercial printing firms in the world and provided the full range of electrical engineering services for… read more.

In this article, the fire investigators at Robson Forensic discuss the all too common relationship between barbecue grills and structure fires and burn injuries. They also share advice on grilling…