In this article, originally published in Marina Dock Age, Marina and Boatyard Expert, Carl Wolf visited 5 South Florida marinas in the days following Hurricane Irma. His goal was to identify common actions that contributed to each marina’s ability to successfully weather the storm. 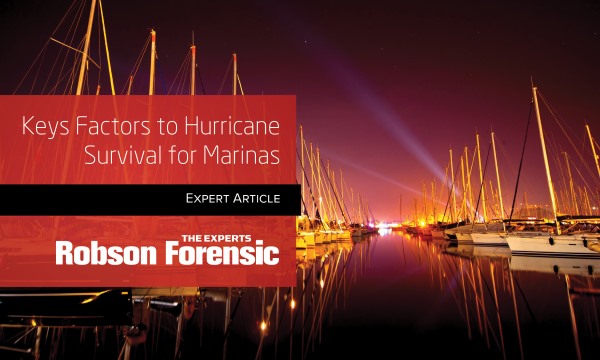 Editor’s Note: Within the first few days post Hurricane Irma, Carl Wolf visited five Southeast Florida marinas to consider the positive operational or physical factors that may have minimized damages or business disruptions at each marina. All of the visits were unannounced, as phone service and electrical outages were still rampant. The following is a first-hand account of those facilities. The marinas asked that their identity remain anonymous. Area closures and impassable roads dictated, to a certain extent, which marinas he would be able to visit. Representatives from each marina courteously took precious time from their busy schedules to discuss what helped to limit possible damages from interrupting the business at their respective facilities during Hurricane Irma.

Facility No. 1 located on northern Biscayne Bay (date of visit 9/15/17, five days after Hurricane Irma) – The marina maintains a Hurricane Plan. When an observed tropical weather disturbance is potentially seven days away from landfall, the Hurricane Plan is brought out. When the tropical storm is only three or four days away from possible landfall, full preparations take place. Potential objects which could become flying projectiles during the storm are secured.

Communication with the marina customers is through email blasts, Facebook, and Twitter. Three-quarters of the boaters visited the marina prior to arrival of Hurricane Irma. Yacht captains worked with recreational boat owners in securing the boats for the storm (teaching the boaters the right way to tie up a boat). The marina’s occupancy was 95 percent at the time Hurricane Irma hit, and the marina was 100 percent operational on September 13, three days after the hurricane hit.

Facility No. 2 located on northern Biscayne Bay (date of visit 9/15/17, five days after Hurricane Irma) - This marina also maintains a Hurricane Plan. When tropical weather activity is noted on long-range forecasts, and within a seven-day window from the storm potentially arriving, the marina activates its Hurricane Plan and starts preparations. Employees secure loose objects, such as fiberglass decking grates from the fuel pier, picnic tables, trash cans, and signs.

The marina stayed in touch with its customers via using email blasts and texts. Securing boats at the marina was a team effort between boat owners and marina employees. Through the storm, four boats broke free (mooring lines chafed and broke) from exterior mooring fields. During Hurricane Irma, the marina did not lose electricity (allowing boaters after the storm, who lost electricity at their homes to stay on board their boats). The marina was at fully occupied prior to the storms landfall and 100 percent operational on September 13, three days after the hurricane hit.

Facility No. 3 located on northern Biscayne Bay (date of visit 9/14/17, four days after Hurricane Irma) – This facility consists of a fully enclosed dry storage boat building, which is rated to withstand a Category 5 hurricane. With the exception of some landscaping and tree damage, the facility was fully operational immediately after the departure of Hurricane Irma.

Facility No.4 located in Broward County (date of visit 9/14/17, three days after Hurricane Irma) – three days of preparation were needed to secure the facility and boats prior to the arrival of Hurricane Irma. Boats that are normally stored outside on land were relocated inside the dry storage buildings. Once the interiors of the buildings were full, the outer doors were closed and braced by large forklifts on the exterior side of the doors. A considerable amount of time was spent removing potential projectiles, such as trash cans, signage, and boat trailers.

Boats in the water were secured at the dock and extra lines crossed the fairways in spider web fashion. The marina used Facebook, the marina’s web-site, and email blasts to communicate with customers. Well-maintained equipment allowed the employees to maximize their efforts in a short period of time. The marina was at 100 percent occupancy at the arrival of Hurricane Irma and except for internet service, the facility was fully operational as of September 13, three days after the hurricane hit.

Facility No. 5 located in Palm Beach County (date of visit 9/13/17, three days after Hurricane Irma) – The marina maintains a Hurricane Plan, which was activated a few days before the landfall of Hurricane Irma. The marina removed and stowed all possible objects that could break free and cause damage, such as signs, trash cans, liferings, and fire extinguishers. Marina employees worked with and taught boaters on proper ways to secure boats for the approaching storm.

The marina communicated with all customers prior to the arrival of Hurricane Irma. Two boats from moorings outside the marina broke free and drifted into the marina. The marina manager attributed some of the success of the marina to the positioning of the breakwalls protecting the basin. The facility has both floating and fixed docks and was 80 percent occupied when the storm arrived. After the storm, the marina was fully operational on September 13, three days after the hurricane hit.

Here are six common elements noted during my visits, which helped lead to the success of the facilities visited post Hurricane Irma. Each marina:

In addition, certain physical attributes in some of the marinas, such as well-placed breakwaters and hurricane proof storage buildings, enhanced their ability to weather the storm with little or no damage,

There is no assurance that these six common elements or physical features will guarantee future success in withstanding hurricanes; however, absent these keys to success, there is a greater risk of failure, including personal injury, death, and property and vessel damage.

The marina is a dynamic environment where vehicles pulling boat trailers interface with pedestrians, cyclists, other motorists, and watercraft. In addition to the roads, walkways, and buildings involved at most other facilities, the marina introduces a waterfront and great expanses of open water. Investigating injuries and other life threatening incidents in this unique environment requires industry experience and decades of relevant experience. Robson Forensic offers the nation’s foremost experts in marina and boatyard safety.

Submit an inquiry or contact the author of this article to discuss your case.

Carl is an expert in the operations and management of marinas, boatyards, and dry-stack boat storage facilities. Throughout his career, since 1976, Carl owned his own marina related businesses,… read more.

In this article, Marina & Boatyard Expert, Carl Wolf describes important topics of consideration for waterfront facilities approaching hurricane season. This article was originally published in the…