An inflight fire remains one of the top emergencies an aviator fears. Most general aviation aircraft have limited (or no) on-board fire-fighting capabilities.

In-flight fires are insidious and can create a myriad of problems in addition to the fire itself. Toxic, debilitating gases, smoke, flight control ineffectiveness and power loss are a few situations the pilot must battle while trying to find the nearest suitable place to land. In some instances the pilot/aircrew is unable to safely land the aircraft. The subsequent crash may result in death of all aboard, precluding witness statements. At this point, the aircraft accident investigator must rely on the physical evidence within the wreckage to determine origin and cause of the fire. If a post-crash fire ensues (which occurs most of the time) a significant amount of in-flight fire evidence is consumed/masked due to impact damage and post-crash fire. The task to find evidence of the in-flight fire and its source is challenging.

The good news; evidence of in-flight fire may still be present. You just have to know what to look for. Since most general aviation aircraft are constructed of aluminum, A process/resultant of heated aluminum, followed by an impact will result in what is commonly called “broom straw”. The degree of “broom straw” is dependent on structural exposure to heat and force of impact. 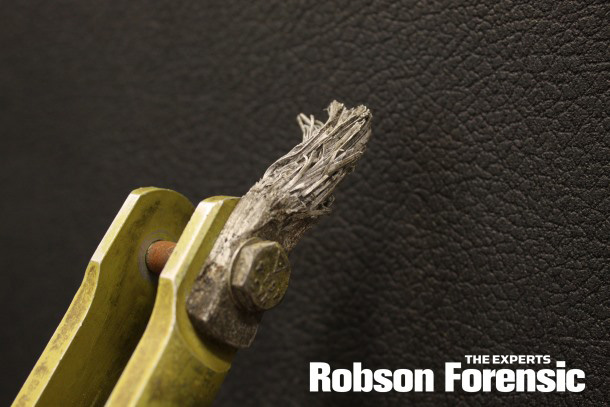 “Broom straw” is merely one indication of in-flight fire. There are more. If you have the opportunity to take a suspected in-flight fire case (or any other aircraft crash) allow our team at Robson to provide you with a thorough investigation and testimony of what happened.

Although not required for General Aviation aircraft, Halon fire extinguishers are highly recommended by the FAA and National Fire Protection Association (NFPA) to be aboard all aircraft. Halon is the preferred extinguisher due to its low toxicity, chemical properties, and minimal dust cloud production. Halon, unlike CO2 extinguishers, do not decrease oxygen levels within the cockpit when discharged. Additionally, Halon is non-corrosive and will not “cold-shock” electrical components, thereby decreasing the chance of an electrical fire.

The aviation group at Robson Forensic is comprised of seasoned aviation experts with deep roots in both government and industry. From complex event reconstruction to aircraft maintenance, materials selection, air traffic control, and airport engineering; the forensic experts at Robson Forensic are well equipped to assist in your investigation.

for more information, submit an inquiry or visit our aviation practice page.

This article, written by our materials science practice, discusses a few case studies involving jet engine failure and what went wrong to cause it. It Is an Unfortunate Reality That Planes Crash Every…