In this article, the electrical engineers at Robson Forensic provide an introduction to Lithium Ion Polymer (LiPo) batteries. The discussion includes an explanation of the technology, the applications where they are most frequently used, and the conditions that are commonly associated with their failure. 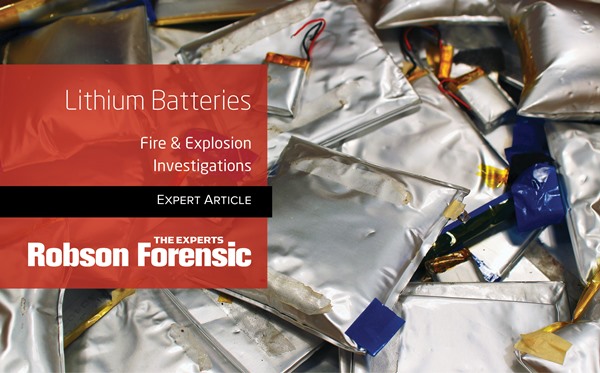 In recent years, the experts at Robson Forensic have investigated many incidents of fires and explosions involving Lithium Ion Polymer (LiPo) batteries. Through our investigations and other research, we have identified several common causes of these incidents, including: This article provides an introduction to the science behind LiPo batteries, their advantages and disadvantages, and information on the common causes of failure. If you have a case involving a LiPo battery that caught fire or exploded, Robson Forensic can assist in determining how and why the incident occurred. Introduction Lithium Ion batteries have become ubiquitous in our daily lives. These batteries power common products that we routinely interact with, including mobile phones, laptop computers, e-cigarettes, and vape pens and “mods”. As with any product that generates, consumes, or stores electrical energy, there is always some risk of fire as a result of the sudden release of energy that might occur from a short circuit. Other risks are overheating of conductors due to overloads and potential shock injury as a result of coming into contact with energized parts. One type of Lithium Ion battery that has become very popular among RC model and Airsoft hobbyists is the LiPo battery, short for Lithium Polymer or more correctly Lithium Ion Polymer battery. The LiPo battery is manufactured in a pouch format, an evolution of cylindrical Lithium Ion batteries. The shape of the pouch can be easily varied allowing for a diverse range of applications LiPo batteries offer three main advantages over Nickel-Metal Hydride (NiMH) or Nickel Cadmium (NiCd) batteries: 1) they are lightweight, and can be made in almost any size or shape; 2) they offer higher capacities, allowing them to hold much more power; and 3) they offer much higher discharge rates, meaning they pack more punch. There are some disadvantages to LiPo batteries as well: 1) they have a shorter lifespan (fewer charge/discharge cycles; 2) they have more sensitive chemistry that can lead to fire if the battery gets damaged; and 3) they need special care in the way they are charged, discharged, and stored. LiPo Battery Anatomy LiPo batteries have the same basic components as any battery; an anode, a cathode, and electrode and electrolyte. LiPo cells are constructed by stacking electrode and electrolyte materials in a flat sandwich, rather than winding them in a jellyroll style as in a cylindrical cell. See Figure 1. 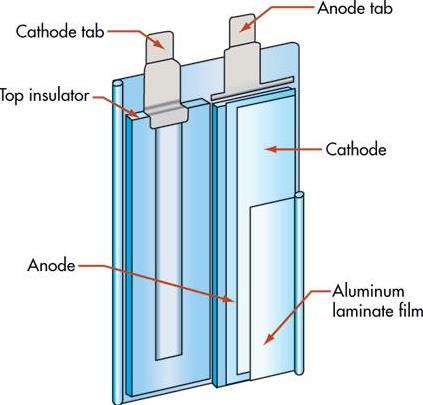 A typical LiPo battery used by an RC model hobbyist might look like the one in Figure 2. The case will include ratings and warnings to the consumer. The ratings include a “C” rating which is the discharge rate in amps, the capacity rating in mAH (milliamp hours), the cell voltage rating, and the “S” rating which represent the number of cells. Figure 2 shows the basic anatomy of a LiPo battery. 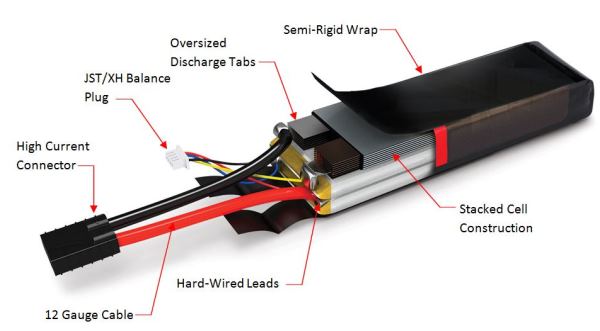 Chargers Chargers are available in many varieties. Some chargers have the ability to charge different types of batteries, i.e. NiMH (Nickel Metal Hydride) and LiPo. Some battery chargers have dual-outputs meaning they charge two batteries at the same time. There are also typically settings for number of cells, charge current, and power limit values for each output channel. When using all channels at maximum power at the same time, the power supply rating may be exceeded resulting in overheating of the power supply and risk of fire. For chargers that can charge different types of batteries, it is critically important to use the LiPo setting when charging a LiPo battery. LiPo batteries are charged using a constant current/constant voltage (CC/CV) method. The charging current remains constant until the battery reaches its peak voltage, the voltage is then held constant while the current is reduced. NiMH batteries are charged using a pulsed charging method. Charging a LiPo battery this way can have damaging effects that can lead to fire and explosion. LiPo Battery Failures LiPo cells are susceptible to the same troubles of other lithium-ion cells; overcharge, over-discharge, over-temperature, short circuit, crush and nail penetration can all result in thermal run away and catastrophic failure leading to explosion and fire. Cylindrical lithium-ion cells have a rigid metal case, whereas LiPo cells have a flexible (polymer laminate) case. This makes them over 20% lighter than equivalent cylindrical cells of the same capacity, which is the primary benefit in RC model applications. But the lack of a rigid case also makes the LiPo battery more susceptible to possible damage from RC model impacts. Impacts, jarring, and vibration may cause internal battery damage or result in some impingement on the case of the LiPo battery. When the battery is charged, the damaged area is the point where failure occurs initially due to low resistance which creates heat. This heat creates lithium oxide (Li2O) that increases resistance and causes more heat. The process continues until the battery bursts open from the pressure. At this point, the combination of heat, oxygen, and humidity in the air react with the lithium, resulting in a very hot and dangerous fire. Manufacturers typically provide instructions and warnings with the batteries. Generally, the instructions include statements similar to the following: Additional precautions include having a fire extinguisher nearby to prevent the spread of a fire.

Robson Forensic investigates fires, explosions, and shock injuries for determining their cause. Batteries have inherent risks and LiPo batteries can have catastrophic results when they fail. Investigations of these incidents involving batteries include determination of cause, determination of whether there is or is not a manufacturing or design defect including review of safety devices, and determination of whether the instructions or warnings are adequate or have been followed. For more information submit an inquiry or visit our Electrical Engineering practice page.

Daryl is a licensed Professional Engineer. He was an Electrical Engineer for the two largest commercial printing firms in the world and provided the full range of electrical engineering services for… read more.

In this article, electrical engineer, Jim Orosz, P.E., provides an introduction to the basics of electricity. He discusses voltage, resistance, current, and how each variable affects the injury…

In this 2016 update of an article from late 2015, the technical experts at Robson Forensic highlight the available information regarding hoverboard fire/explosion incidents. Our experts are…