In this article, police practices and procedures expert Michael Gerard discusses the evolution of law enforcement procedures in active shooter situations at schools in the years following the Columbine High School shooting. By re-evaluating response times and other incident related data, law enforcement and emergency response agencies have been able to adapt their strategy, enabling them to safely begin assisting victims more quickly. 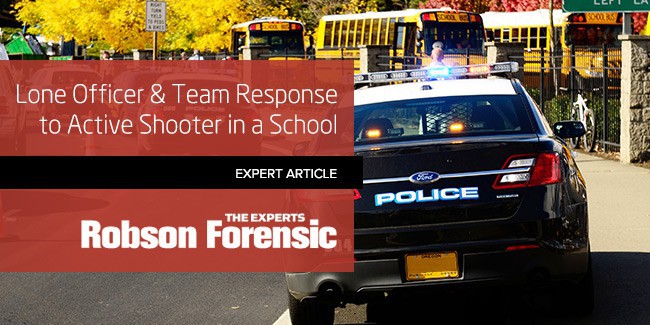 Lone Officer & team Response to an Active Shooter in a School

In 1999, when the active shooter attack at Columbine High School occurred, the term “active shooter” was not a part of our vocabulary. Columbine brought this type of attack on a school to the forefront of concern for both law enforcement and educators throughout the country. The FBI now defines an active shooter as an individual actively engaged in killing or attempting to kill people in a populated area. What law enforcement learned over the past 19 years is that they must continuously reevaluate the way they plan, prepare and respond to incidents of mass violence in our schools. Prior to Columbine, law enforcement officers were trained to respond to acts of extreme violence involving hostages, or what is now termed as an active shooter, in essentially the same manner. Responding officers were trained to surround the area of the incident and call for specially trained police officers commonly known as SWAT. A Special Weapons and Tactics Team (SWAT), is a group of highly trained officers called upon to deal with incidents of unusual danger and violence. Soon after Columbine, law enforcement changed their tactics to address the need for a more immediate response and intervention to an active shooter in a school.

As the number of active shooter incidents continued to rise, law enforcement personnel realized that the strategy for how to address incidents of mass violence and active shooter had to change. Thus, the concept of immediate action rapid deployment (IARD) was developed and implemented. No longer was it acceptable for police officers to wait for specially trained (SWAT) officers to arrive and address the threat. Officers were now trained to quickly assemble a small squad of three or more highly trained officers to locate and neutralize the threat. When implemented, IARD was believed to be an effective way to provide quick law enforcement intervention while maintaining an adequate level of safety for the responding officers. However, as the casualties resulting from active shooter incidents continued to mount, the change in law enforcement tactics had little to no effect on stopping the threat.

The problem with waiting to assemble a team of officers is the time it takes for multiple officers to respond to the location of the active shooter incident. Law enforcement was unable to respond and assemble enough officers in time to stop the shooter at the inception of an incident. Response times vary among law enforcement agencies. An FBI study stated it can take up to 18 minutes for police to arrive. The same research showed that 70% of active shooter incidents have a duration of less than five minutes[1]. By gaining an understanding of law enforcement response time and the general short duration of an active shooter incident, the tenets of IARD needed to change. Law enforcement leaders and trainers tried to balance the need to respond and intervene as quickly as possible to stop the threat, while maintaining an adequate level of officer safety. To address this need, the training concept of offering front line officers “tactical options” was introduced. This provided officers with tactics and training which instilled the confidence needed to make the decision to provide
life-saving intervention if people are still being attacked when the first officer arrives. This concept was not immediately accepted by many law enforcement trainers who believed multiple officers were needed to stop an active shooter.

Recent active shooter incidents in our schools have demonstrated the need for immediate intervention by the first responding officer. In some cases, such as the Great Mills High School and Dixon High School active shooter incidents, the lone officer was able to immediately intervene into the incident by engaging the shooter with his firearm and stopping the active shooter. In other incidents, such as the Trolley Square Mall active shooter incident, the off-duty, single officer engaged the shooter by drawing his firearm and identifying himself as a police officer. This resulted in the shooter focusing on the officer. These incidents demonstrate that action by a single officer can stop the shooter from inflicting additional casualties. Once the immediate threat is stopped, law enforcement and EMS/fire personnel must immediately assess the incident by working together, and begin the process of providing medical treatment to victims. This can be accomplished by providing officers with personal trauma equipment and implementing the Rescue Task Force (RTF).

The Rescue Task Force consists of trained EMS/fire and law enforcement personnel who work together to provide basic medical care to victims. Police escort the EMS/fire personnel into an area in order to provide immediate lifesaving treatment to victims. In the past, EMS/fire would not enter a scene until confirmation that the threat was no longer present. RTF training allows EMS/fire personnel to enter a “warm” scene, an area which has been cleared or isolated by law enforcement, under the protection of trained police officers in the minutes following a mass shooting. These measures have not only been supported by law enforcement and EMS trainers, but they are currently being taught in many jurisdictions across the country. 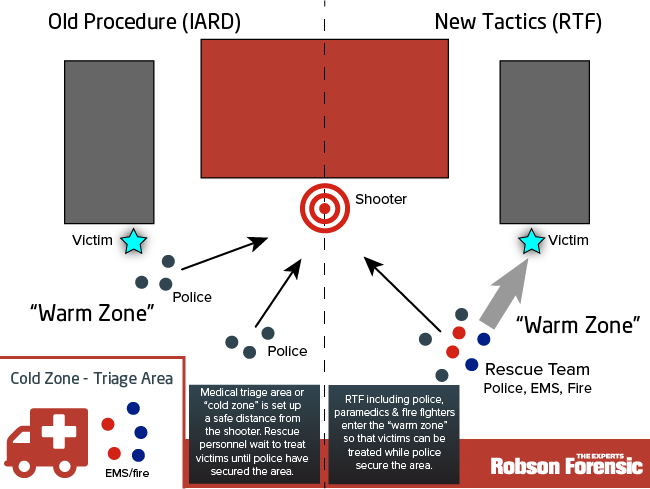 Planning, training, and policy must continue to evolve in order to protect the public and provide law enforcement officers with the training and equipment needed to address incidents of on-going mass violence. The planning function must include all stakeholders, such as law enforcement, fire/EMS, emergency management, and school administration. Policies should include clear language on both single officer and multiple officer active shooter intervention. The policy should also address operational training requirements, including Rescue Task Force (RTF) protocol.

The leadership and training personnel of every law enforcement agency should identify training and equipment needs in order to provide a safe and effective working environment for the officers in their charge. Recommended equipment for the individual officer includes a plate carrier ballistic vest and ballistic helmet, patrol rifle, and individual trauma equipment for self-aid and the treatment of potential victims.

For law enforcement officers to be reasonably effective during a violent and rapidly evolving incident, such as an active shooter, officers should be properly trained. This training must focus on taking immediate action when responding to an active shooter incident.

Former police officers, retired FBI agents, and professors of forensic science all contribute to the impressive capabilities of our law enforcement practice. Our forensic experts are often tasked with reviewing crime scenes and evidence, as well as the actions of police, forensic investigators, and security professionals. Our experts have received the highest levels of training and have done the work at every level of law enforcement.

Michael Gerard is a police practices and premises security expert with over 26 years of law enforcement and security experience. As an expert witness, Mike applies his expertise to forensic casework… read more.
All Articles