The most reliable indicator of driver impairment is an observation of a driver’s behavior behind the wheel, followed by an assessment performed by a qualified Drug Recognition Expert (DRE). Forensic analysis by a Drug Recognition Expert can be helpful in certain disputes toward validating assessments performed by field officers, establishing impairment at the time of an incident, or working with a toxicologist to determine impairment at specific times prior to an incident.

This article provides an overview of the standard of care for law enforcement to determine marijuana intoxication during traffic stops. 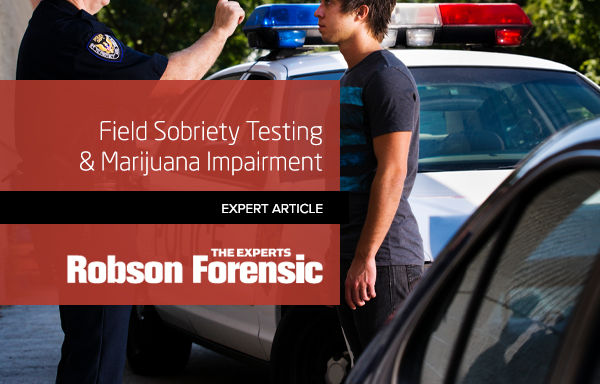 Driving Under the Influence (DUI) due to marijuana impairment is a criminal offense in every state, with differing definitions of impairment depending on state legislation. Some states only need to prove consumption of marijuana or per se laws. Conversely, prosecutors in other states need to show how the driver was impaired by the consumption of marijuana. Regardless of the state, police officers who are specifically trained and qualified as Drug Recognition Experts are often requested on scene to conduct evaluations of impairment. During these on scene evaluations, DREs make determinations as to the drug classification the driver has or likely has in their body and relative levels of intoxication.

What Is a Drug Recognition Expert (Dre)?

A DRE is a police officer who has received special training and has been qualified to conduct testing and interpret behaviors that a person may be under the influence of alcohol, drugs or combination of drugs or alcohol. They are trained to conduct a 12-step testing process on the subject that includes a blood or breath sample from the subject and gather facts through an interview of the arresting officer. A complete description of the 12 Step DRE Protocol can be accessed here, through the International Association of Chiefs of Police (IACP).

The information gained from the DRE 12 step process can then point to one or more of the seven drug categories which are:

To detect if someone is driving solely under the influence of marijuana, a trained DRE would look for whether the subject exhibits several indicators. Specifically, a marijuana intoxicated person would have an absence of both Horizontal Gaze Nystagmus (HGN) and Vertical Gaze Nystagmus (VGN). Generally, Lack of Convergence (LOC) will be present in a subject under the influence of marijuana. However, a small percentage of the population cannot cross their eyes naturally, so the DRE should ask the subject if they have that ability.

A DRE may find the subject’s pupils to be dilated. In some individuals, pupil size will be normal. While sustained pupil dilation is a sign of marijuana intoxication, normal pupil size does not rule out intoxication. Additionally, the subject’s pupillary reaction to the 3 different lighting conditions would typically be normal. Marijuana-impaired individuals can have varying results with traditional field sobriety tests, and this reinforces the importance of having the DRE to look at all the indicators and gathered information to make an assessment. The last two signs a trained and qualified DRE would expect to see in an individual who was impaired by marijuana are: an elevated pulse and blood pressure.

From my experience as a DRE officer in the field, a subject who is intoxicated on marijuana will demonstrate many of the same symptoms as alcohol impairment. Some of these shared signs are blood shot, glassy or watery eyes, and poor performance on the divided attention psychophysical test. Instead of the smell of alcohol coming from the driver, the DRE may observe the smell of marijuana, the presence of marijuana remnants, and/or a marijuana smoking device.

A police officer who is trained and qualified as a DRE should look beyond the 12-step test that they have conducted. Law enforcement should take into consideration how the subject was driving, or if they were involved in a crash. In most cases a DRE officer is called to the scene for the evaluation, so they might not have observed the driving first-hand. This would be part of the DRE’s interview of the arresting/stopping officer. Behaviors like swerving or weaving in and out of their lane of travel or driving well below the posted speed limit are long-established indicators of intoxicated or impaired driving.

Some cases require the involvement of a forensic toxicologist to analyze the results of alcohol and drug screening reports. The forensic toxicologist will use this and other case related information to determine whether an individual was under the influence of drugs and/or alcohol at the time of the incident or was served alcohol while visibly intoxicated, depending on the issues in dispute. Working in conjunction, a DRE evaluates the clinical signs of impairment at the scene, and the forensic toxicologist confirms the DRE’s evaluation by measuring the analyte in the blood.

Forensic toxicologists are often called upon to determine whether drug or alcohol intoxication was a contributing factor to a vehicle crash, workplace injury, or other fatal incident. In this article,…