This article is intended to provide an introduction into the injuries most commonly associated with miter saws, as well as information on available safety equipment/features. 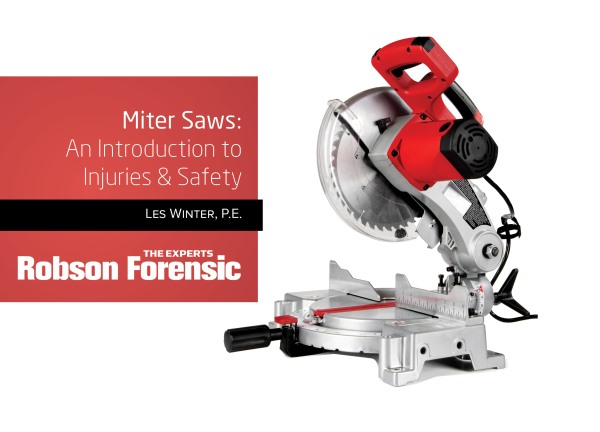 A miter saw is a type of circular saw used to cut boards to length. The motor and blade are supported on a pivoting arm. The workpiece is placed on a flat metal table, below the arm. An ON/OFF switch is located on the arm. When actuated, the switch causes the motor to become energized and the circular blade rotates at high speed. With the blade spinning, the arm is lowered until the blade contacts the workpiece and severs it. When the ON/OFF switch is released, the blade stops rotating, the arm is returned to its upper position, and the workpiece can be retrieved. The pivoting arm/motor/blade assembly is often referred to as the “head” of the saw. It is held in the upper position by a spring. A guard surrounds the blade while the arm is in the upper position. As the pivoting arm is pushed downward, the guard retracts to expose the blade, both during alignment of the cut and during cutting operations. The rear of the saw table has a “fence” or vertical stop which prevents the workpiece from being thrown backwards, away from the operator, by the force of the blade teeth. The fence has a right and left section separated by a gap of several inches which allows the blade pass through. The head can be rotated to provide cuts at angles other than 90 degrees. Miter Saw Anatomy 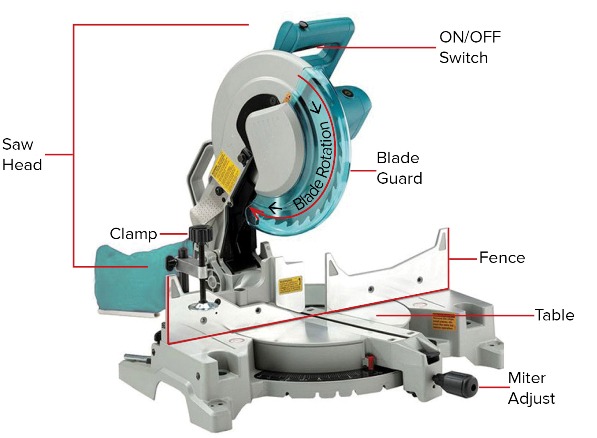 Miter Saw Injuries Most miter (chop saw) accidents can be reconstructed in order to find their causes and to determine if liability can be established among the various parties. Injuries caused by miter saw operation typically fall into two categories:

Eye Injuries Eye injuries occur when the rotating blade contacts a part of the saw due to improper installation or damage to the saw’s components and fragments are thrown towards the operator. Such injuries also occur when sawdust, splinters or even chunks of wood leave the saw at high velocity and strike the operator. Aside from checking the various mechanical parts of the saw for damage, arrangement and tightness, it is imperative that operators are provided with and that they use safety glasses or goggles at all times when operating the saw. Off-Hand Injuries Off-hand injuries occur when the hand not operating the saw, usually the left, is used to hold the workpiece onto the miter saw’s table. If the workpiece is pulled by the saw’s blade, it can slide sideways, forcing the operator’s hand into the blade. The proper practice is to use a clamp to secure the workpiece in place, thus allowing the operator to position his off-hand away from the saw. Clamps for this purpose are typically supplied with new saws and can be effective in preventing off-hand blade contact. Other off-hand injuries occur when the saw on/off button is actuated unintentionally while the hand is close to the blade. ON/OFF Controls ON/OFF controls for miter saws are typically one of two types: spring-loaded, pre-travel, and spring-loaded trigger/release. The pre-travel type requires the operator to depress the switch approximately ¼” before the switch turns the motor on. The trigger/release type requires the operator to make two separate and sequential motions before the saw’s motor can start: depress a release button and then, with the button still depressed, press the trigger. Saws equipped with the pre-travel are more prone to be unintentionally started than those equipped with a spring-loaded trigger/release. By requiring two distinct and separate motions, a saw equipped with a spring-loaded trigger/release cannot be inadvertently started by unintentionally bumping or squeezing the trigger. Relatively Safe Machines Properly equipped and reasonably used, miter saws are relatively safe machines. Where proper equipment and/or reasonable use are lacking, the hazards inherent in the rotating circular blade can cause traumatic injuries.

Our experts are regularly retained in casework involving lacerations, amputations, and deaths that are associated with the use or misuse of saws and other woodworking tools. The scope of our investigations can include equipment operation and maintenance as well as various safety features, such as guards, protective equipment, and flesh sensing technology units (sawstop). For more information visit our Woodworking Tools practice page.