How did this collision occur? What were its underlying causes? Who bears what responsibility? These are the questions Robson Forensic experts answered through the course of this investigation.

This two-vehicle collision occurred May 22, 2007, at about 4:30 p.m., on Prospect Street, in Ewing, Mercer County, New Jersey. The collision involved a 1991 Dodge Spirit passenger car, driven by Car Driver, and a 2001 Suzuki motorcycle, operated by Motorcyclist.

This investigation was performed to determine if the Car Driver’s driving was improper in a manner that was a cause of the collision. 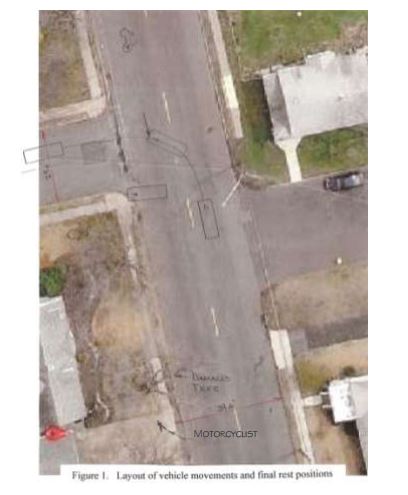 Based on the information available, subject to change with new information, and to a reasonable degree of professional certainty, I conclude:

In this collision, a car blew the Stop sign and was struck on the right side by a bus as the car crossed the through street. A passenger in the car was seriously injured. Our investigation was…

Robson Forensic was retained to determine if the forces generated in a two car, same direction crash were sufficient to cause injuries. The Plaintiff was driving slowly, approaching a stoplight, when…

The automotive experts at Robson Forensic have developed a simple motorcycle anatomy overview for clients who may not be familiar with the design elements of a motorbike. Motorcycle Fatalities The CDC…