In this case, a pedestrian was struck and killed by a vehicle while attempting to cross midblock on a four-lane, urban roadway. Robson Forensic was retained to reconstruct the incident and determine the causes of the collision. 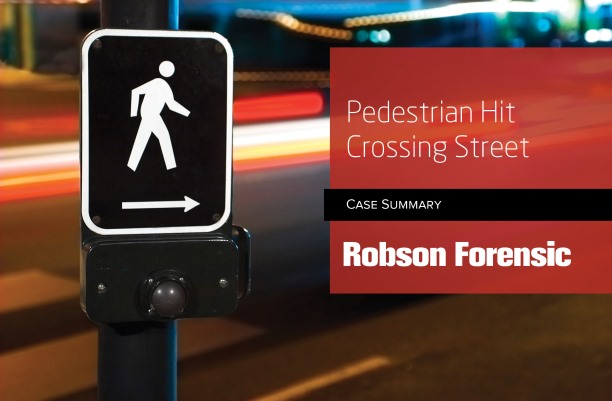 A pedestrian was struck and killed by a vehicle while attempting to cross midblock on a four-lane, urban roadway. The incident occurred at night as the victim was attempting to visit a nightclub on the southbound side of the roadway. The victim had parked her vehicle at an unrelated business on the northbound side of the roadway because the nightclub’s parking lot was in a state of disrepair. Street lights ran along the roadway. However, the street light in front of the club’s entrance was Out. Robson Forensic was retained to reconstruct the incident and determine the causes of the collision.

Robson Forensic crash experts reconstructed the collision. By reviewing the final resting positions of the vehicle and pedestrian and performing a throw-distance analysis, our expert determined that the vehicle was traveling about 28 MPH at impact, lower than the posted speed limit of 35 MPH.

Robson Forensic human factors expert investigated the light levels along the roadway in front of the club’s entrance to determine if the striking driver could have seen the crossing pedestrian in enough time and distance to avoid the collision with the street light Out and with it functioning. Using accepted scientific methods, our human factors expert determined that with the street light Out, the contrast between the pedestrian and her background was such that the pedestrian would not have been readily visible to the driver in enough time or distance to avoid collision. However, had the street light been functioning, the increased ambient lighting along the road surface would have increased the contrast to the point where the driver would have been able to readily detect the pedestrian in enough time and distance to avoid the collision. Our human factors expert was able to conclude that the municipality’s failure to properly illuminate the roadway was in violation of ANSI RP-8 Roadway lighting standard and was a cause of the incident.

Robson Forensic premises experts investigated the actions of the nightclub to determine if they acted unreasonably in a way that caused the incident. Their findings revealed that the nightclub provided inadequate on-site parking and were aware that customers were parking in the lot on the other side of the four-lane roadway and crossing under the non-functioning street light. The nightclub’s failure to provide adequate on-site parking was improper, subjected the pedestrian to the dangerous crossing of the roadway and was a cause of the collision.

The experts involved in investigating a pedestrian strike vary as much as the cases themselves. While typically rooted in crash reconstruction or highway engineering, these cases regularly involve experts specializing in human factors, meteorology, premises safety, or toxicology. For more information visit the Pedestrian Strike page on our website.

In this article, highway engineering expert, Kevin Gorman provides an overview of construction work zones and temporary traffic control. His discussion includes the planning involved in preparing for…

In this article the highway engineering experts at Robson Forensic discuss how pavement drop-offs are created, why they are potentially dangerous, and what highway engineers should be doing to reduce…

In this article the highway engineering experts at Robson Forensic introduce some of the hazards associated with the use of steel plates in roadway projects, along with the standards designed to…