This article provides an introduction to quick release operation and associated failures. The experts at Robson Forensic have experience investigating the performance of quick release mechanisms in a broad range of products, including bicycles, knee walkers, and other mobility devices. 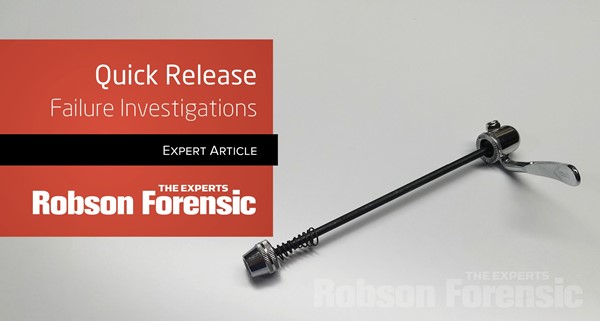 Why Do Quick Releases Fail?

A quick release (QR) is a device found on millions of bicycles sold in the United States each year. Its function is to attach a bicycle’s wheel to the frame or fork. Additionally, quick releases can clamp a bicycle’s seatpost into the frame and allow for tool-free seat height adjustment. The device consists of a threaded rod with a lever-actuated cam on one end. 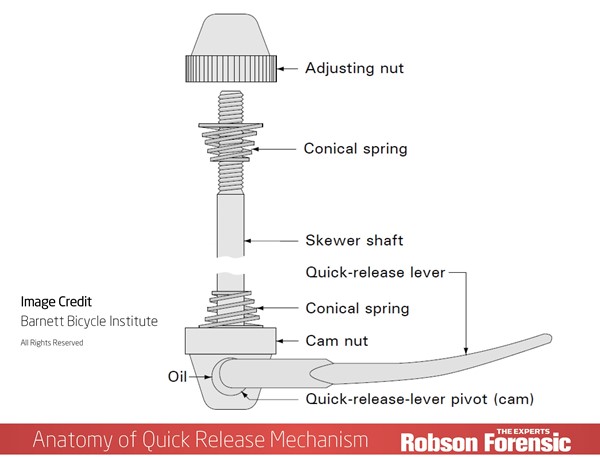 The tension that allows the quick release to safely stay closed is provided by the actual stretch of the skewer shaft. When the device is not adjusted properly, failures can be caused by too little or too much tension:

The adjusting nut opposite the lever-actuated cam must be spun such that clamping force is generated that will stretch the QR shaft by a very specific distance (usually less than 1 millimeter). If this sounds complicated, that is because it is. To a novice bicycle buyer, this information should come from an informed bicycle shop employee or other trained professional. Proper operation of a bicycle quick release seems straightforward, but instruction and practice can ensure that a QR is closed safely and consistently. 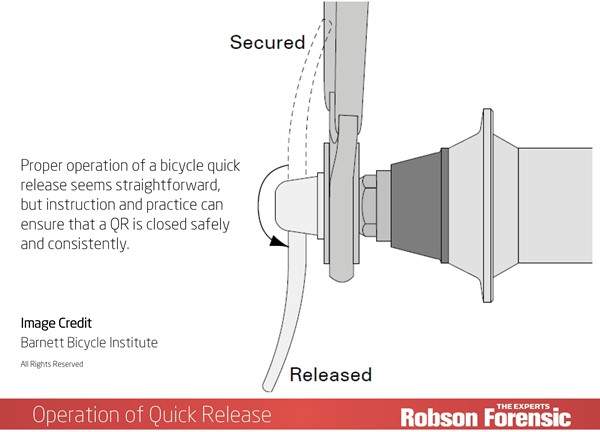 On bicycles equipped with disc brakes and quick release front axles, certain QR designs create a dangerous condition such that a loose QR lever could swing into the spinning disc brake rotor. This could cause the front wheel to lock up suddenly and pitch the rider over the handlebars. Beginning in 2015, a sweeping recall in the bicycle industry has addressed this potential hazard. To date, over 2.5 million bicycles sold in the US have been included in the recall.

Many bicycles are moving from quick release axles to ‘through axles.’ While still retaining the ability to remove wheels for maintenance and transport without tools, through axles provide performance benefits such as added stiffness and, potentially, weight savings. Through axles can also reduce the hazard of front wheel ejection on bicycles equipped with disc brakes. Bicycles using forks designed for through axles do not have open dropouts; therefore a loose through axle does not have the same potential hazards as a loose quick release. 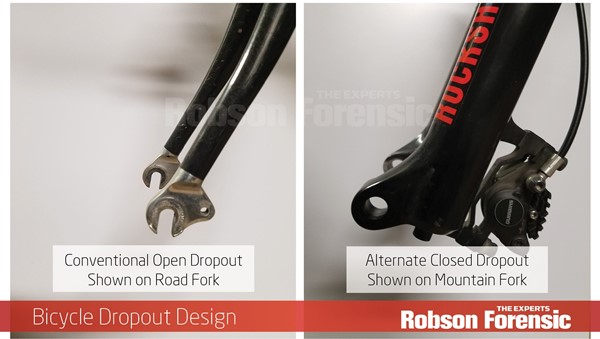 The experts at Robson Forensic are regularly retained in bicycle design, assembly, maintenance and repair cases involving falls, collisions, traumatic brains injuries and deaths that are associated with the use and misuse of bicycles. The scope of our investigations can encompass rider action, instruction, event organization, bicycle design, assembly and maintenance.

To discuss your case with an expert, submit an inquiry.

In this article, the bicycle experts discuss bicycle frame and component failures, with an emphasis on the failures that are most commonly associated with a loss of control or crash. Bicycle Frame &…