In a recent case, Railroad Engineering Expert, Gus Ubaldi, P.E. was retained to investigate a matter in which a railroad employee was injured when a switch he was operating struck him in the face. We provide a synopsis of his involvement along with a redacted version of his report on this page. 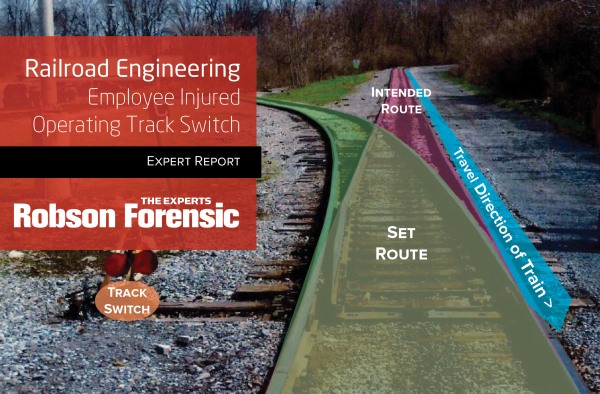 A railroad employee was delivering boxcars to an industry on tracks owned and maintained by the industry. He was operating a remote-controlled train and as he approached a turnout, he saw that the switch was lined against him. Unable to stop in time, the employee dismounted his moving train, and attempted to line the turnout for his move. He was unsuccessful and the train ran through the switch, causing the components to “blow apart” resulting in injury to the employee.Robson Forensic Railroad Engineering Expert, Gus Ubaldi, P.E. was engaged to opine if the industry’s maintenance of the turnout and its components was improper in a manner that was a cause of the employee’s injuries.The allegations against the industry concerned the position of the switch against the train and improper operation, construction and maintenance of the switch allowing the handle to strike the employee.Mr. Ubaldi opined that the industry’s actions regarding track inspection and track maintenance, switch alignment, and switch operations were reasonable and proper. He further opined that the switch failed in an “explosive” manner because the employee ran the train through it, not because of any defect in the switch, noting that the Industry had no responsibility for railroad or train crew actions. Had the employee acted in a manner consistent with railroad rules, the injury would not have occurred.Download Redacted Case Report

Our railroad experts bring decades of experience in railroad engineering from the perspectives of both designer and user. As construction engineers and maintenance-of-way supervisors, our experts are uniquely qualified to provide accurate and realistic assessments of planning, design, construction, and inspection of railroads.For more information visit our Railroad Engineering practice page

Railroad Engineering Expert, Augustine F. Ubaldi, P.E. was interviewed by MSNBC in connection with the January 12th incident in which one passenger was killed and many hurt when smoke filled a…

Railroad engineering expert, Augustine F. Ubaldi, P.E., was retained to determine if the railroad’s actions or omissions created an unreasonably dangerous condition that was the cause of the…