The National Transportation Safety Board (NTSB) has issued a special investigation report on the recent increase in deaths of railroad and rail transit track workers and has made recommendations to reduce the number of fatalities. [1] 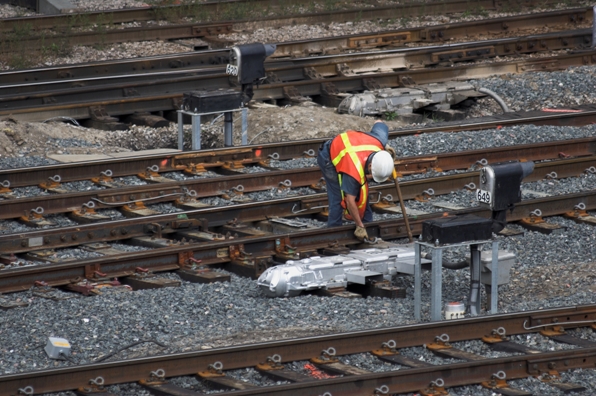 Railroading can be a dangerous activity to those working on and around the tracks. Concentration on the task-at-hand or noise from accompanying machines can prevent a worker from knowing of an approaching train. Accordingly, Section 49 of the Code of Federal Regulations Part 214 spells out specific regulations governing the protection of on-track workers. It is comprehensive – defining who is an on-track worker, when they need protection and what kind of protection is available. It spells out the responsibilities of the railroad, as well as of the worker. It requires that a job briefing be given before work begins, that the worker acknowledge receiving and understanding the briefing, and allows the worker the right to a good-faith challenge of the safety procedures in effect. The regulations cover the use of track maintenance machines and the protection required, both for the machines from trains, and for the workers from the machines. Anyone who is considered a track worker is required to not only be trained in these regulations, but also to receive annual recurrent training. In short, if correctly followed, no track worker should be injured or killed by trains or track machinery.

Yet there were 15 track worker deaths in 14 separate incidents in 2013 [2]. In one highly publicized case, a worker was killed when a dispatcher incorrectly released a track for use by trains. In another, two workers inspecting track were killed when they were struck by a train. In the other 12 incidents, what occurred? Was there insufficient training by the railroad? Did the workers fail to follow the proper procedure? Were warnings to workers and trains insufficient or ignored? Were shortcuts taken that nullified safety? In cases such as these, an independent expert can examine the facts to determine how the incident happened and why it occurred. __ Sources: [1]Railway Track and Structures, www.rtands.com, 9/25/14; Progressive Railroading, www.progressiverailroading.com, 9/25/14 [2]Railway Track and Structures, 9/25/14