The damages that can result from the failure of a retaining wall range from minor to catastrophic. Retaining walls are structures used to retain soils (i.e., laterally support them) where a change in elevation of the soils on the two sides of the wall is desired. They can be permanent as in the case of site/landscaping walls, or they can be temporary structures as in the case of shoring walls for adjacent excavation/construction. 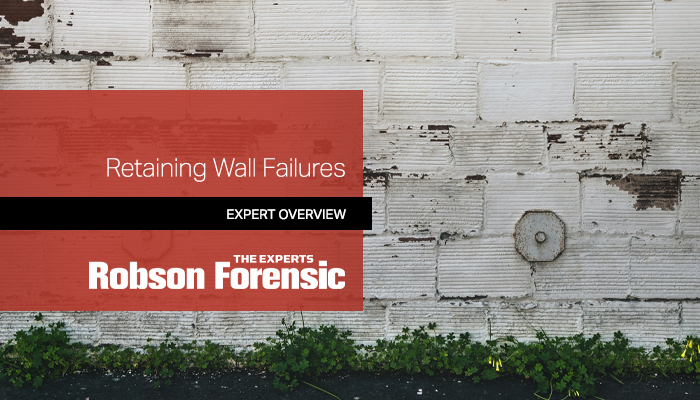 Retaining wall failures may be local, with minimal impact to the wall’s overall stability, or the failure may be global and defined as a total loss of the wall along with the retained soils. With fewer redundancies in their lateral load support mechanism, global failures of cantilevered-type walls may consist of the entire wall, or large portions thereof, horizontally translating (i.e., sliding failure), failing by overstressing the soils below the footing (i.e., bearing failure), or rotating (i.e., overturning failure). Those failure scenarios are depicted below:

Owners of retaining walls are required by local ordinances, building codes, and other applicable standards to properly maintain their retaining walls. Proper maintenance not only helps to assure greater longevity and proper performance of the wall but will also help to identify corrosion or deterioration of the structural elements of the wall system in a timely manner, which should reasonably result in less costly repairs. Federal and state DOT agencies are a valuable resource for proper maintenance planning due to their desire to protect their assets and the public from retaining wall failures.

A forensic investigation of a retaining wall failure by a qualified structural and/or geotechnical engineer will typically consider the following as potential contributing factors:

Material that would be useful in a forensic investigation for a retaining wall failure includes the original plans for the design of the wall and its foundation, a geotechnical report, and all maintenance records. Site inspections of the failed wall and material testing of the structural components is often required. Information gleaned from these sources, along with information acquired during a site inspection and/or material testing must be scrutinized and analyzed in order to identify the cause of the failure or collapse.

There are many factors that can potentially contribute to the structural failure of a retaining wall. The engineers at Robson Forensic approach these investigations not only with experience designing and constructing these features, but also the experience of investigating failures and testifying how and why they occurred.

In this article, the civil and structural engineers at Robson Forensic provide an introductory lesson on concrete spalling. They address the common causes and why spalling is a problem. Concrete…

In this article, Structural Engineer Anthony Volonnino, P.E., discusses excavation engineering, the common issues that arise with excavations in urban settings, and some of the failure points that we…