Many of our equine expert witness investigations involve incidents where a rider has been thrown from a horse and sustained injuries. We are tasked with determining the cause of the horse’s behavior, which is likely related to weather and environmental conditions, training, rider behavior, the use of tack and equipment, or other factors that are known to trigger the ‘fight or flight’ response in the horse. 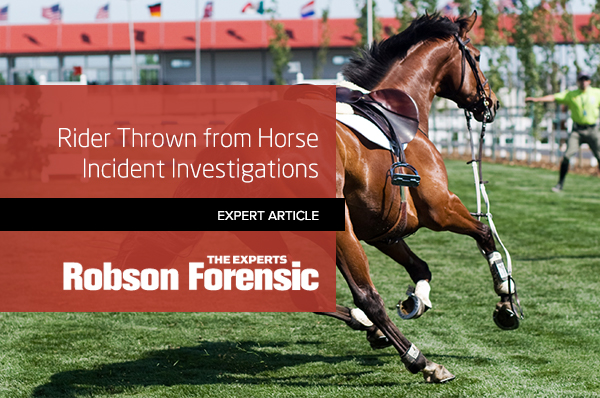 Falling Off vs. Being Thrown Off

For clarity, we should first differentiate between a rider falling off a horse, and a rider being thrown from a horse. Riders can fall off for a multitude of reasons that are not the result of any negative behavioral response or action taken by the horse. For example, beginner and/or novice riders are particularly susceptible to falling off due to a loss of balance.

Proper tack and equipment, attentive instruction, and appropriate horse/rider pairings all contribute to providing a safe environment for the rider.

When we say that a rider was thrown from a horse, we are talking about an unexpected ejection from the saddle that resulted from the horse bucking, rearing, spinning, stopping short, bolting, laying down, or any combination of reactive behaviors.

What makes a horse throw its rider? (and who is at fault?)

The primary factors that are known to cause riders to be thrown from horses include, but are not limited to:

In this case, a small child was thrown while participating in a pony ride. Defendant stated that she had minimal experience in teaching horseback riding. On the day of the incident, an employee of Defendant was leading the child on a pony ride in a non-enclosed area that appeared to be a trail. During the ride, the employee was leading the horse improperly, at which time the horse bucked, causing the child to fall from the horse.

Minimal instruction was provided to the child prior to the pony ride. The stirrups were not adjusted for the child prior to the ride, as Defendant stated that the stirrups and stirrup length did not matter for a pony ride. No boots or riding helmet were used by Plaintiff, as Defendant stated that the decision for boots and helmets is the responsibility of the parents.

As we cover in the article Pony Ride & Trail Ride Safety, the standard of care for pony rides at fairs, carnivals, or other events are distinct from that of an equestrian facility that conducts riding lessons due to the typical age and experience level of the riders involved. Like with a riding lesson, the skill level of the rider should be assessed by the staff member or attendant prior to mounting, and the mounting/dismounting action of the rider should be performed with the assistance of the attendant.

In this case, Plaintiff was injured while attempting to ride Defendant’s horse, a gelding. Plaintiff had 27 years of riding experience, and stated in testimony that she was aware of the risks of riding.

Defendant’s role was to hold the horse while Plaintiff mounted and rode. Defendant became detached from the horse (some testimony said she dropped the lead rope, others said the horse jerked away). The horse took off, Plaintiff was thrown and broke her leg.

Plaintiff alleged that Defendant was negligent in not holding the horse and did not warn Plaintiff that the horse was untrained and had not been ridden. However, Plaintiff had previously ridden the incident horse, and based on her previous experience with the incident horse and Plaintiff’s 27 years of riding experience, the case was decided based on the facts that the plaintiff freely and knowingly assumed the risk of injury and relieved the defendant of the obligation to act with reasonable care.

There are several factors to assess when conducting a forensic investigation into a fall or other injury that has occurred during equestrian activities. Our experts are qualified to address the means and methods as to whether best practices were followed to ensure the safety of the rider, the appropriateness of the horse/rider pairing, and other variables that may have contributed to the cause of a horse riding incident.

This article describes industry-accepted best practices for conducting trail rides and pony rides. Riders involved in these activities often have limited knowledge or prior experience with horses and…