There is a depression in the ground in front of you as you are heading into work. It wasn’t there when you left yesterday. Could this be a sinkhole?

Not every depression in the ground meets the geologic definition of a “sinkhole.” To meet this definition, the depression must be in an area of karst topography. The term “karst” is used to identify a topographical area with subsurface drainage and landform features like caves, springs, and underground rivers. If a hole forms in an area without karst, then it is just a depression or collapse, often caused by poor drainage, development activity, or weak soils.

In this article, Geologist Brendan Merk explores the topic of sinkholes, how they form, and the harm they can cause within the context of an actual event. These concepts form the methods that a geologist uses to conduct forensic investigations involving the identification of sinkholes. 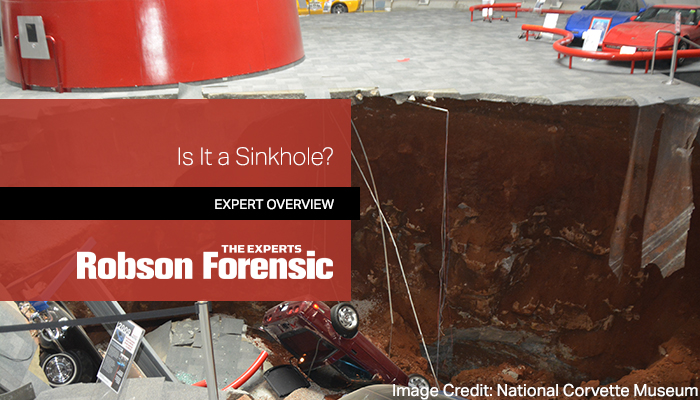 Is It a Sinkhole?

Water from rain events commonly collects in puddles, forms streams, and flows downhill to join a larger stream or river. But that’s not what happens when sinkholes are present. The “sink” in sinkhole can be compared to a kitchen sink. The bottom of the features is lower than the edges, but it does not hold water. Instead, water flows out through a “drain” and away into underground passages.

As such, sinkholes are not isolated features. They connect their small area of drainage to a larger hydraulic (water) system. The resultant karst topography refers to a network of sinkholes, caves, springs, and other features associated with dissolved bedrock. This dissolved bedrock in a karst area is typically composed of limestone but can also form in other water-soluble materials like dolomite, gypsum, and salt deposits.

The presence of limestone is a key ingredient in understanding karst development and sinkhole formation. Limestone is a sedimentary rock1 formed mostly of the mineral calcite. This mineral is fragile and can easily dissolve in even a weak acid. As it turns out, natural processes can create such an acid. Rain falls to the ground and absorbs into the soil, encountering carbon dioxide. This starts a simple chemical reaction that results in the creation of carbonated water, just found in any carbonated beverage. This acid moves slowly into the limestone, dissolving the calcite.

Over time, large and extensive underground passageways can be created. A well-known example is Mammoth Cave in Kentucky, which is the longest cave system in the world. This impressive cave system formed in limestone rock over many thousands of years.

The same natural systems that resulted in cave development are still hard at work dissolving away limestone. This process continues to the point where the cave passageways become unstable and collapse, creating sinkholes that will eventually dominate the landscape. In karst topography, surface streams can be rare because the water drains through underground rivers rather than remaining above ground. One positive outcome is that karst areas are generally less prone to flooding issues.

Given the special hazards that karst brings, the land must be surveyed, and buildings and infrastructure must be engineered carefully. Sinkholes are essentially drainage features for water and should be considered as such. Development that cuts off natural drainage pathways will cause new pathways for water distribution that will form over time. If this flow of water moves underground where it is no longer visible, it can be hard to determine if these new pathways exist or may be forming below a building.

This is a concern, since a structure is only as solid as the ground beneath it. Engineers need to know when they are dealing with sinkholes in karst environments. Putting a building over a sinkhole hazard is analogous to putting a building over a stream or other water feature, which increases the risk of building failure. Unreasonably dangerous conditions may be created when a structure is constructed over a sinkhole.

Another concern with karst is that the connections between the surface and subsurface water supplies are strongly intertwined. As such, soil contaminated with a hazardous material can move from one area to another quickly and easily. Transportation of chemicals can affect sensitive ecological environments and endangered species in caves. But this connection can also lead to unreasonably dangerous conditions for humans.

For example, sinkholes were historically used as sites for convenient waste disposal in many rural areas. Since sinkholes are water features, contamination from waste materials often moved through the water and bedrock as easily as it would through a surface water feature (i.e., creeks or rivers). In some cases, people (and entire communities) inadvertently polluted their own water supply by disposing of waste in sinkholes.

Located in the heart of cave country, the city of Bowling Green, Kentucky, is well known for its underground passageways, springs, sinking streams, and most notably, its sinkholes.

On February 12, 2014, a sinkhole measuring 40 feet across, and 30 feet deep opened below the National Corvette Museum in the middle of the night.

Eight classic cars disappeared into the ground, all caught on security cameras. The spectacle gained national attention and captured the imagination of the public. As noted on the museum website:

“Corvettes are eye-catching, even when they lay mangled in the bottom of a 30 foot [sic] sinkhole.” 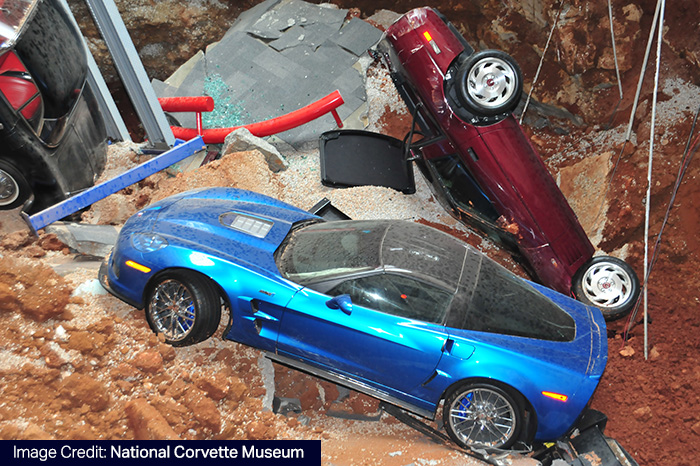 Given the media attention of events like these, small soil collapses can make people wonder, “Could something like that happen where I live or work?”

The formation of sinkholes is a slow process that often takes hundreds or thousands of years. But their formation represents a real hazard for those living in such areas. To prevent increased risk to an area, the most important step is to know whether an area is likely to have karst topography. If the area is not in a karst environment, then hazardous sinkholes are not present. Depression features will likely be limited, indicating that a larger problem due to sinkhole formation is not present.

Local bedrock geology maps and soil surveys are commonly reviewed to determine if limestone or another soft bedrock underlies an area. The topography of an area also provides data for analysis, which is coupled with the presence or absence of large land areas without streams or rivers. Well-developed karst areas may also have an abundance of sinkholes that resemble circular depressions similar to the cratered surface of the moon. The presence of these features support, but do not necessarily confirm, the presence of these karst sinkholes in an area.

The expert geologists at Robson Forensic can provide assistance in assessing whether the proper surveys were conducted prior to construction, evaluate areas where sinkhole are suspected, determine whether contamination in karst areas may be due to upstream pollution, or analyze soil sample results to establish additional data regarding the likelihood or the presence of unreasonably dangerous conditions at a property.

1.  A sedimentary rock is a layered rock resulting from the consolidation of sediment, e.g. a clastic rock such as sandstone, a chemical rock such as rock salt, or an organic rock such as coal. Dictionary of Geologic Terms, Third Edition, 1984.

Residential and commercial development can permanently affect the flow of stormwater, potentially negatively impacting local waterways and neighboring properties. Activities during the construction of…