Collisions between non-powered recreational watercraft (kayaks, canoes, paddleboards, etc.) and faster, wind or motor powered vessels can be catastrophic for passengers in the slower vessel.

Any boater experienced with congested waterways is likely aware of the threat of a collision, but prior to 2012 almost no scientific research on the topic had been published.

Recreational boaters and professional mariners alike often share anecdotal advice on boating safety, but that guidance can be of mixed value, and lacks scientific merit.

In 2012, Robson Forensic published research that quantified factors in small boat collisions such as visibility thresholds and boater actions that influence visibility.

This article provides an overview of that study, discussing the relationship between speed and visibility in small craft collisions, known danger zones, and provides tips for all vessel operators to reduce the likelihood and severity of marine mishaps. The complete study can be accessed here. 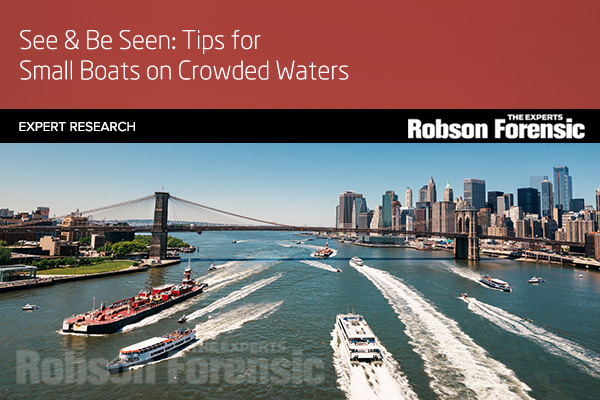 Operator inattention and improper lookout are leading factors in marine accidents. These factors can be exacerbated by a vessel operator’s inability to see and identify a small craft in the water in time to make evasive maneuvers.

Recreational boaters should be aware of the conditions that may diminish their visibility, traffic patterns that put them at risk, and what they can do to make themselves and their vessels as conspicuous as possible.

Mishaps most frequently occur when non-powered craft encounter faster moving vessels, such as speed boats and personal watercraft. With speeds often between 20 and 60 knots, it is practically impossible for the non-powered craft to maneuver its way out of a collision.

This study revealed typical identification distances of a very small non-powered watercraft in the range of about ¼ nautical miles (506 yards).

At a closing speed of 30 knots, it may be impossible for the non-powered craft to take adequate avoidance measures. Any measures that can enhance your visibility to the approaching vessel can make the difference between a collision and a harrowing near miss.

With typical identification distances in the range of ¼ NM, there are many circumstances in which a non-powered craft can be suddenly revealed to powered watercraft, similar to a pedestrian “darting out” between parked cars and into oncoming vehicle traffic. Such circumstances occur when the small craft is obscured by: peninsulas, islands, larger craft, blind bends, piers, or docks.

Prudent course planning by the non-powered watercraft can avert certain vulnerabilities. Based on the results of this study, while a small craft is better detected against a land background, there is a point where traversing too close to shore can place the non-powered craft into a Zone of Vulnerability. 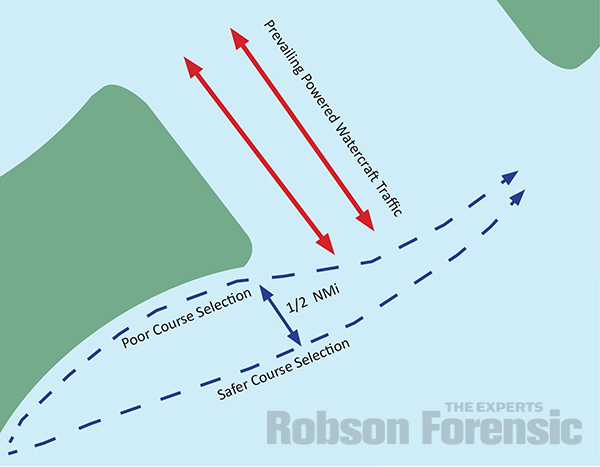 There are also conditions where a non-powered vessel would take so long to cross a channel that it could unexpectedly find itself in the path of a faster vessel.

In short, any existing conditions that mask key identification features of the non-powered watercraft will negatively affect identification distances. Most participants identified paddle flash as the first visual cue. However, wave conditions, white caps, and frequent wave reflections can mask paddle flash. This can be overcome by raising a paddle and intentionally flashing by simultaneously waving and rotating the paddle. The use of dark colored paddle blades is not suggested as it results in less reflection from the sun, thereby reducing the beneficial effects of paddle flash on detection and identification distance. The ability to identify a small craft over open water is made even more difficult when the small craft is between the approaching vessel and the sun.

The following recommendations provide small craft operators with a greater likelihood of avoiding a collision. These are suggested for inclusion in boater safety and education. 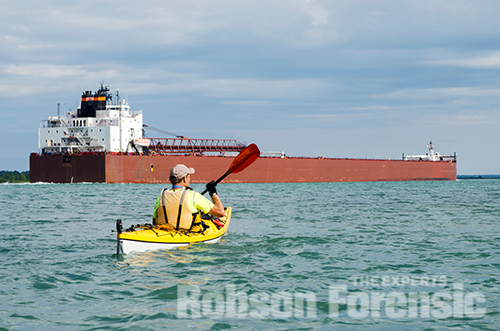 To reprint any portion of the information on this page, please submit a request to inquiries@robsonforensic.com.

What better expert for matters relating to marine and industrial engineering than a Merchant Mariner who's versed in ship design and operation, who co-authored the U.S. Navy Towing Manual, and… read more.

This study examined powered craft operators’ ability to identify a kayak under differing visibility conditions. The kayaker was either wearing a dark PFD or a fluorescent shirt over the PFD, and…

In this piece, the focus is on Boating Safety Education and the importance of a pre-departure Safety Briefing. Good seamanship requires Captains, vessel operators and owners to have mitigation and…