Failed structure investigations take many forms: from conventional examples such as buildings and bridges to the less obvious such as traffic signs, tents, trees, and chairs. From a lay perspective, the unifying theme is that something became unstable or collapsed; but from an engineering perspective there was a system failure that caused the structure to not support the loads it was exposed to, and perhaps was intended to support. Structures can fail in different ways and do not always collapse; this article focuses on structures that collapse.

Structural Engineer Anthony Volonnino P.E. sets the stage for looking at the world from the perspective of a structural engineer. For lawyers and insurance professionals, the article attempts to provide a framework for understanding causation, notice, standard of care, and ultimately liability in a broad range of cases where buildings, products, and natural systems fail or collapse. 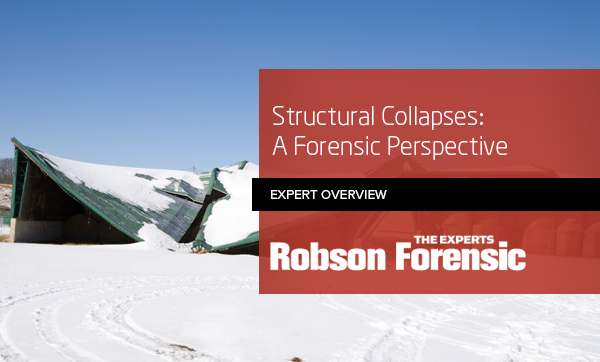 Looking at a structural failure as part of a forensic investigation, we typically seek to answer questions surrounding:

If you can reframe your vision of the world as one that’s full of structures, each of their own unique design, but bound by the same rules of engineering and physics, the evaluation of structural failures becomes measured and formulaic.

All structures are subjected to forces, and every structure has unique load thresholds, beyond which structural failure will predictably occur. Expected forces include self-imposed loads such as self-weight (dead loads) and superimposed forces (live loads) such as a truck travelling on a bridge or horizontal loads caused by earthquakes or wind forces.

A critical concept in our forensic investigations involves the determination of what loads were anticipated for this type of structure, and whether or not the structure was designed, constructed, and maintained to safely resist them. For building and infrastructure projects, there are well established engineering standards that provide guidance, but other structures require a consideration of the environment and anticipated use.

After the proper loading criteria have been established, it is then possible to evaluate the adequacy of the design and integrity of the structure in question. This is possible because structures respond to loads in a predictable manner.

All forces travel through structures in a predictable route, eventually making their way down to the supporting soils; this is referred to as the load path. A simple, and naturally-occurring example of a structure is a tree: all vertical (self-weight and possibly ice) forces as well as horizontal (wind) forces are transferred by the individual branches to the main trunk(s) and those forces are then delivered to, and safely resisted by, the supporting soils via the tree’s root system.

All of the structural elements within that load path, from the upper floor down to the underlying soil, must be sufficient to safely support and transfer the load from one element to another. Any failure along the load path can result in a failure of the structure. Therefore, the chain is only as strong as its weakest link.

Structural systems also include fasteners that connect components together such as bolts, nails, welds, and pins; these elements are critical to safely transfer forces between larger members and to complete the load path. Accordingly, the structural failure in your case may potentially be attributed to the choice of bolt securing a sign, the length of stake anchoring a tent, or the thickness of cable supporting a utility installation. Every link in the chain must function as intended to safely transfer loads from where they are applied to where they are resisted (typically, the ground). Every link in the chain must also be analyzed.

If signs of impending failures are discovered early enough, they may be corrected, averted, or at least safeguarded prior to a collapse event. Many failures are preceded by cracks, excessive deflections, or some other sign indicating abnormal behavior of the structure. Large cracks, cracking that is dynamic (cracks that continue to form and even grow with time), large deflections or deformations, loose connections, etc. are all potential warnings of a structural problem that may result in a failure. Fortunately, structures rarely fail without first “presenting”; thus frequent inspections are paramount to proper observations which would reasonably discover/identify the possible issue early enough to correct it. It is for this reason that structures require regular and proper maintenance; maintenance programs and schedules can be found in applicable industry Standards.

Merchandise Displays - A stack of mulch bags is a structural system like any other and follows the same principles. While engineers are not typically involved in the retail environment to consult on displays, following an injury-causing collapse a structural engineer can be helpful in determining a safe stacking height, what the incident pile looked like prior to the collapse, and for how long the display would have likely shown signs of deflection.

Tents and Inflatable Amusements - Anchoring lines are a critical load path for many structures including party tents, inflatable amusements, and for bracing trees. The failure of a tether, stake, or ballast can result in moderate wind events causing disproportionate injury and damage. Following these events, structural engineers can determine appropriate anchorage requirements and if deviations from requirements and/or industry standards were causative in the incident.

Guardrail Failures & Fall Protection Systems - Safety barriers and fall protection tethers are both examples of structural systems designed to transfer anticipated loads throughout a system of structures and connections. Following a fall, structural engineers may be called upon to evaluate the design, construction, and maintenance of failed systems.

Forensic structural engineers are uniquely qualified to investigate structural failures due to their intimate knowledge of how structures are designed, constructed, maintained AND how they are intended to safely perform. The experts in the Structural Engineering practice at Robson Forensic are experienced in investigating incidents of structural failure and collapse.

submit an inquiry or contact the author of this article for more information.