In this article, woodworking safety expert, Les Winter, P.E. describes the various processes and equipment that are necessary to safely operate a table saw. Les regularly applies this information to the investigation of table saw mishaps, including incidents resulting in amputations, kickbacks, and blindness. 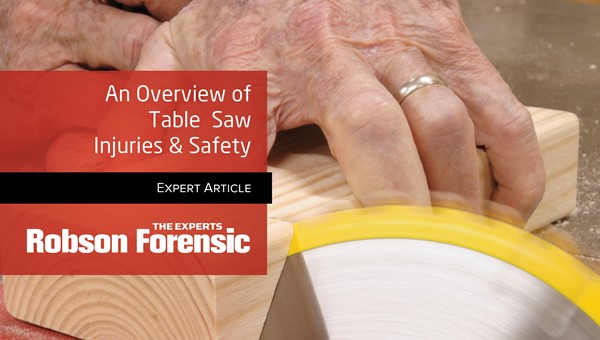 Part 1: The Hazards and Exposures

The standard table saw is a reasonably safe tool when used within certain limitations. Safety engineers consider a danger to be comprised of two elements: a hazard which is the physical thing that can hurt you, and the level of exposure to that hazard. If either hazard or exposure can be reduced, the danger level will be reduced as well. When it isn’t possible to reasonably change the hazard, accident prevention depends on ways to reduce the exposure. One of the most effective ways to reduce exposure is by providing a guard around the hazard. 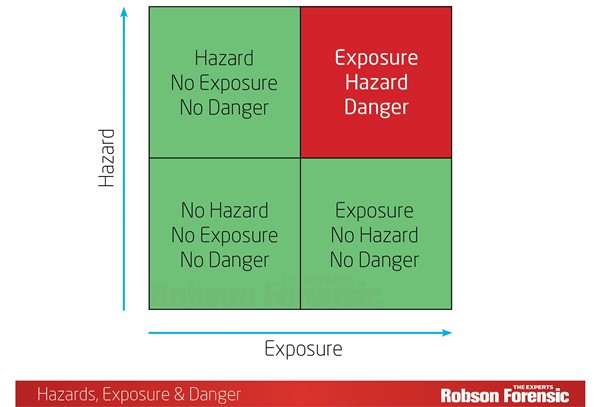 In the table saw, the hazards are the rotating saw blade and its sharp teeth. Neither of these can be eliminated and still yield a working saw. Accordingly, if we are to reduce the danger level on a typical saw, we must reduce the exposure of the operator to the hazard presented by the saw’s blade. Woodworkers accomplish this by using a reliable system of safe guards combined with personal protective equipment (“PPE”). Neither safe guards nor PPE alone provide adequate exposure reduction, but the two, in combination, do. First, let’s get to know the ways the rotating blade can cause injuries. The teeth on the blade can cut off fingers. The rotation can make the workpiece into a hazardous projectile and throw it back at the operator at high speed (“kickback”). It can eject a spray of saw dust particles, fragments from metal embedded in the wood, such as staples, and broken blade parts. Shielding the operator from these three hazards, blade contact, impact by kicked-back workpieces, and impact by debris, require different methods. Next, let’s examine how woodworkers can work with a saw in ways to reduce the risk of getting hurt. The standard table saw guard is comprised of three parts: a splitter or riving knife, anti-kickback pawls, and a shield or barrier guard. 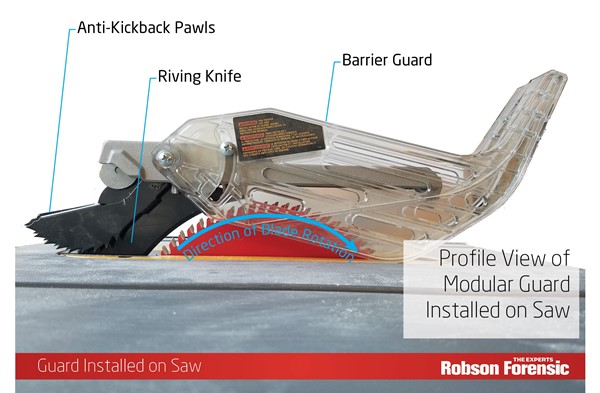 The barrier guard section of the guard, surrounds the table saw’s blade and can be effective in protecting the operator from blade contact in four directions: from above, left, right, and rear. The front of the guard, under which a workpiece can pass, provides little protection against a hand inadvertently sliding straight forward towards the blade. This motion can result from a hand slipping off the workpiece while pushing it forward, a loss of balance, a slip or trip, or by being struck by a kickback. Using push sticks in combination with the guard, moves the hands away from the guard’s front entrance and thereby decreases the operator’s exposure to the blade. Here, the push sticks and the guard form a protective system, enhancing operator safety. This enhancement does not occur when using push sticks or the guard alone. There is discussion in the literature of avoiding being struck by a thrown board by using correct body positioning to stay “out of the line of fire”. While this may be helpful where the board is thrown straight back, that does not always occur. Standing to one side is of little help when the board is forced away from the fence, rises to the top of the blade and is then forced to rotate, like the blade of a helicopter, as it flies backwards at the operator. Preventing this occurrence requires, yet again, a system. First, of course, the use of a guard. The splitter/riving knife and pawls, which are part of a standard guard, will arrest the progress of an impending kickback by preventing the wood from pinching the blade and by preventing rearward movement of the workpiece. Second, raise the blade. Because you are using a guard, elevating the blade will not create greater exposure to hand contact. It will, however increase the distance between the workpiece and the teeth at the top of the blade. The further this distance, the less likely those top teeth will have the opportunity to get under the workpiece and propel it backwards. Third, as soon as you feel a substantial increase in the pressure needed to move the workpiece through the blade, stop, and turn the saw off before a kickback can occur. None of these actions by themselves reduces the danger of kickback as much as the combination of all three. 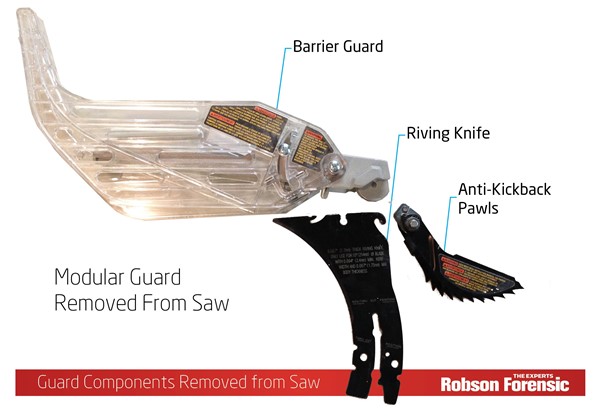 The barrier part of the guard also serves to control the ejection of saw dust and other small fragments at the source. Containing or at least deflecting these materials downward towards the table as opposed to allowing them to be thrown at the operator’s face reduces the danger level to the eyes. Wearing safety glasses in combination with the use of the guard again forms a protective system which adds protection to the operator’s eyes, from stray particles which escape the guard and ricochet upward. Safety glasses, which have openings all around, do not provide the enhanced protection that the guard and glasses together do.

Part 2 The Work Around Methods

Table saws are often regarded as do-everything wood processors. As sold, most do not allow the operator to perform every type of cut in reasonable safety. The manufactures’ instructions typically recommend that you use the guard for every cut that it can be used for. But what about the others: non-through cuts such as grooves and dadoes and very narrow cuts, such as moldings? These cannot be made with a standard guard in place. Let’s examine these cuts and see how they can be made without exposing the operator to the blade’s hazards.

This type of cut is performed with the blade at a height less than the thickness of the workpiece, thereby excavating a hollow on the work piece’s underside. It may be done with a regular blade or with a dado head. On a standard splitter-equipped machine, the splitter would stop the progress of the workpiece just after the leading edge passes the blade. So the operator is tempted to remove the splitter, anti-kickback pawls, and the attached barrier guard, to permit the cut. On newer riving knife machines, the top of the riving knife can sit lower than the top of the blade and can remain. But again the barrier guard and pawls must be removed. In both cases, with the barrier guard removed, the rotating blade is exposed to the operator before the cut is made, and after it is completed. With the blade buried below the workpiece, there is no visual indication as to where it is, relative to the operator’s hands, and when it will become exposed at the end of the cut. There are solutions which can be used to make this type of cut: such as the use of a router. But to do this safely on a table saw, purchase an overarm guard. Overarm units suspend the barrier guard from above, independent of the splitter/riving knife. Such a guard can be adjusted to cover the blade even during a non-through cut. They are widely available, and can be retrofitted to practically any saw. Used with feather boards, to guard against kickback, and a push stick, this system will yield a reasonably safe arrangement. They work with the riving knife in place for non-through cuts, and with the splitter or riving knife in place for ordinary cutting.

On many table saws, the guard extends almost an inch to the right side of the blade making it impossible to bring the rip fence close enough to make narrow cuts. Once again, the operator is tempted to remove the splitter/barrier guard and pawls on splitter-equipped machines, or at least the barrier guard on riving knife units or raise the guard up on top of the fence. Methods to work around this situation exist. Make narrow cuts on the left side of the blade. Start with a wider piece of stock than necessary. Make a trim cut to establish a clean edge on the stock’s left side. Then, simply move the fence further to the left, to set it to the desired width and a bit further to account for the width of the blade’s kerf. Then make the cut in the usual manner. Here the off-cut will become your workpiece. This method may use up a little more material, but does not expose the operator to any significant increase in danger. 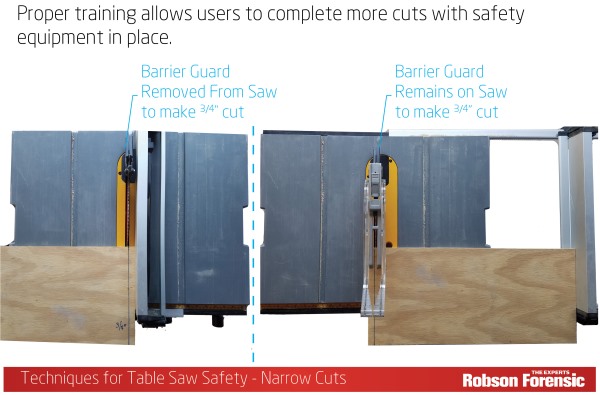 Alternatively, use an overarm guard. These guards can be slid sideways to reduce the clearance between the right side of the blade, and the fence. Some models can be positioned so that the guard’s right edge hovers just above and in line with the blade. Where the anti-kickback pawls won’t work, add featherboards.

Keeping a barrier between the user and the blade, restraining kickbacks with the splitter/riving knife and/or feather boards, using push sticks or using an alternative tool, together with eye protection, will keep table saw users safer.

Our experts are regularly retained in casework involving lacerations, amputations, and deaths that are associated with the use or misuse of saws and other woodworking tools. The scope of our investigations can include equipment operation and maintenance as well as various safety features, such as guards, protective equipment, and flesh sensing technology units (sawstop).

Manufacturers equip their saws with guarding, instructions, warnings and recommendations for personal protective equipment (“PPE”). At least one manufacturer currently provides an additional…

This document, created by woodworking tools expert, Les Winter, P.E., is intended to promote a technical dialog involving the components of a cabinet table saw. Details in this document may vary from…

This document, created by woodworking tools expert, Les Winter, P.E., is intended to promote a technical dialog involving the components of a contractor table saw. Details in this document may vary…