Concrete pumping operations present a number of typical mishaps that can lead to personal injury. Many of these hazards are associated with the forces and energy exerted by the pump and should be controlled through proper planning, training, effective work processes, and proper management.

In this article, Civil Engineer & Construction Expert, Jeffrey Tedder, P.E., discusses some of the hazards relevant to concrete pumping operations and the corresponding safety measures. He also provides potential discovery questions related to these disputes. 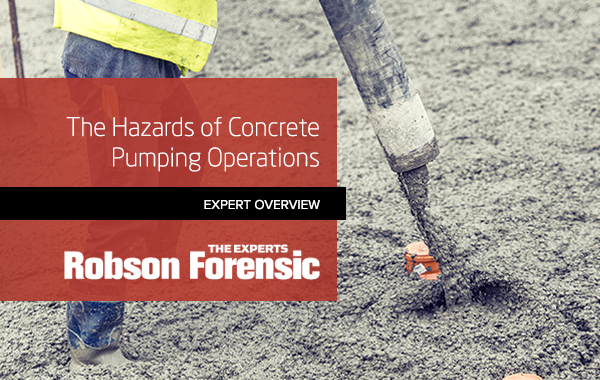 The Hazards of Concrete Pumping Operations

Advancements in concrete pumping equipment have led to improvements in quality, reliability, cost, and availability, making their use on modern day construction sites commonplace. The advantages of pumping concrete in lieu of more traditional means are well established throughout the industry. Improvements to production save time leading to labor, cost, and schedule efficiencies making it the preferred option in many cases.

Truck mounted concrete pumps are equipped with an articulating boom which carries the concrete conveyance piping, as demonstrated in Figure 1. The operator manipulates the boom via a remote-control box to extended the boom to the rough location of placement.

The ‘hose-man’ is then responsible for manually controlling the discharge location of the concrete as it is discharged by physically guiding (manipulating) the end hose.

The hose-man is typically the most vulnerable member of the concrete placement team as his proximity to the end of the discharge hose exposes him to the greatest risk for potential harm. To effectively perform his job he must remain in the ‘end-hose movement area’ at all times when concrete is being placed (‘end-hose movement area’ per the American Concrete Pumping Association (ACPA) is the area within the radius of the last flexible piece of piping).

Being in the end-hose movement area poses elevated risk for hazard when air is introduced into the pipeline. The presence of air by itself poses no real hazard, it is only when the air is compressed that a hazard is created. Air can enter the system at the hopper, the tip of the hose, or if there are other points of entry at holes along the length of the pipeline.

Once in the pipeline the air compresses and is pushed by the concrete behind it, the air in turn pushes the concrete in front of it. As the entrapped air travels the distance of the pipeline to the discharge point the pressure required by the pump to push the concrete forward reduces and the air expands (air volume is inversely proportional to pressure). As the air approaches the end of the hose it expands rapidly propelling the concrete in front of it at an accelerated rate. Plugging of the end-hose, a common problem, exacerbates the issue by causing further pressurization in the line prior to release.

The reaction of the air escaping at high velocity causes the end-hose to whip violently creating the potential for injury to those exposed. It is not feasible to know when the hose will whip. It is possible, however, to monitor for conditions that create hose whip hazards and warn personnel in the end-hose movement area to evacuate.

The hazards involved with concrete pumping can be controlled when all parties involved conduct their work in accordance with industry standards and established best practices. The Construction Safety experts at Robson Forensic have worked at every level within the industry, from bricklayer on residential projects to project manager on multi-prime worksites. Our experts have performed the work central to your case and can testify regarding the hazards, risks, and responsibilities in the construction industry.

Jeffrey Tedder is a Civil Engineer with nearly 20 years of professional construction and engineering experience. His experience in complex, industrial construction where all trades are involved has… read more.

The installation of reinforcing bars for concrete construction, or rebar, is a specialized construction activity that is inherently dangerous not only for the craftsmen engaged in the actual rebar…