In this article, automotive engineer, Peter J. Leiss, P.E. discusses the vital role of airbags in protecting vehicle occupants during side impact collisions. 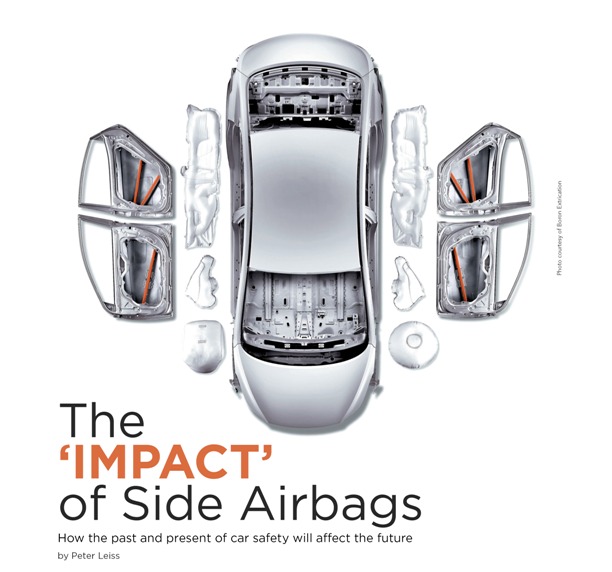 According to the Insurance Institute for Highway Safety (IIHS), about one-third of vehicular deaths occur in side impacts.

Providing protection for vehicle occupants in side impact collisions presents a challenge to vehicle engineers. Compared with frontal impacts, there is a relatively shallow crumple zone for deformation between the occupants and the closest vehicle side-structure.

A stiff side and roof structure combine to protect the occupant from injury by maintaining survival space, and dissipating the force of the collision away from the occupant. Safety cage designs, such as those used by Volvo, Mercedes, and Subaru for decades, are the forefront of side impact occupant protection.

In addition to energy absorbing side structures, the side impact airbag has proven to be one of the most effective methods of improving vehicle crashworthiness in side impact collisions.

Widespread implementation of side impact airbags began in the 1990s and was not limited exclusively to luxury manufacturers; for example, a combination head/torso seat mounted side airbag was introduced as standard equipment on the 1999 Hyundai Sonata. In 2012 more than 95% of passenger vehicles sold in the U.S. were equipped with side impact airbags as standard equipment.

As their name implies these bags are designed to protect different regions of the occupant’s body. Many cars now offer both inflatable curtains and pelvic bags to provide occupant protection from head to hip in side impacts. Curtain airbags have also been proven to be effective in mitigating the risk of partial and complete ejections.

Federal Standard for Side Impact Crashworthiness

Since 1973, side impact test procedures and performance targets have been dictated by Federal Motor Vehicle Safety Standard 214 (FMVSS 214). For over 20 years compliance with the standard was confirmed through a static test of the door and structure by measuring the load and deformation to the system with a hydraulic ram. Starting in 1994, dynamic testing with a Moving Deformable Barrier (MDB) was phased into fleet certification requirements.

Since its inception, the ability of the MDB to relate to real-world collisions has been subject to debate due to its “bumper” profile height of 13 to 21 inches; several inches lower than a typical truck or SUV bumper. The lower bumper height increases the likelihood that collision forces will be applied to the relatively strong rocker panel structure of the struck vehicle, potentially misrepresenting the likelihood of devastating injuries caused by cabin intrusion of higher truck/SUV bumpers.

The new 214 is currently being phased into the fleet certification requirements, with full implementation in the 2015 model year. A manufacturer can also test their vehicle using the same setup, but at a higher MDB velocity (62 kph versus 54 kph) to attain a star rating. These star ratings are used to help customers compare the crashworthiness of different vehicles under the New Car Assessment Program (NCAP).

The Insurance Institute for Highway Safety (IIHS) is a non-profit organization that operates independently of the auto manufacturers and the Federal Government. In response to its own research, the IIHS devised a side impact test and ratings criteria and began using it in the evaluation of vehicles in 2003.

The IIHS test regimen differs from the FMVSS 214 in the test speed, impact angle, and MDB design. The IIHS MDB design was modeled to simulate a light truck or SUV; the “bumper” profile is 4 inches higher off the ground, the “face” of the MDB is 12 inches taller, the MDB replaceable “face” is stiffer, and the MDB weighs an additional 300 pounds as compared to the NHTSA MDB used in certification testing.

The IIHS rates each vehicle’s performance in their side impact testing based on injury criteria to the ATD and the performance of the vehicle’s structure as measured by the intrusion profile.